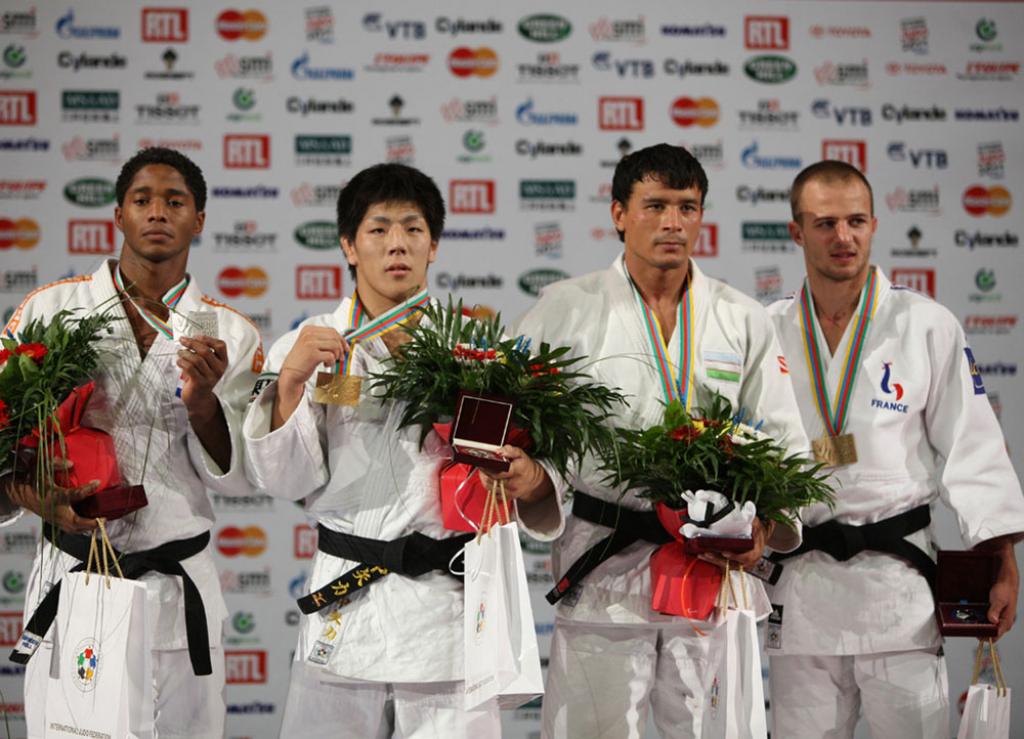 The Japanese have strengthened their grip on the 29th World Judo Championships in Paris on Wednesday, winning the three weight classes contested today and have now taken five of the six gold medals in the six-dayevent at the Stade de Bercy.In addition, their competitors took one silver and one bronze medal as they demonstrated their technical ability, allied to their fighting spirit, which proved to good for the other 135 nations taking part in these annual championships.

World Champion Matsumoto defeated by Sato
Probably the best demonstration of their superiority came in the last final of today’s competition, the under 57 kgs class. Aiko Sato had earlier upset Kaori Matsumoto, her compatriot and defending champion, in the semi-final by tumbling her to the mat with tai-otoshi (body drop) and then pinning her for 20 seconds with kesagatame (scarf hold-down). This brought her into the final against Brazil’s Rafaela Silva, the 2008 World Under 20 winner.

It was a difficult match for Sato as the Brazilian used an extreme left-handed stance to facilitate her favourite technique of uchimata (inner thigh throw). Sato was the more aggressive of the pair but the contest was settled in spectacular fashion. On the edge of the main contest, she ducked under her opponent’s guard with morote-seionage (double handed shoulder throw). Although Silva resisted, Sato kept moving backwards between the legs of her opponent, finally getting the leverage necessary to tumble the Brazilian over her back to the mat for a splendid ippon. She was in tears after her victory, which means that she also has the advantage as the Japan consider which competitor they will send to the Olympics next year, when only one fighter is permitted in each weight division.

The bronze medals went to Matsumoto and to Corina Caprioriu, the 2011 European Championships bronze-medallist, who evaded a sacrifice throw of American Marti Malloy, swivelled round her body, as she held the outstretched arm and of Malloy and affixed jujigatame (straight arm-lock) for a submission.

Gold and Silver for the two Training Partners
The final of the women’s under 52kgs division was less exciting but this was to be expected as it pitted the two Japanese team-mates and training partners, Misato Nakamura and Yuka Nishida, against each other and their knowledge of each others’ techniques meant that every attack was swiftly blocked.Nishida was eventually penalised for passivity, leaving Nakamura as world champion, a reverse of the result in the 2010 World Championships final in Tokyo.

The bronze medals were won by Ana Carrascosa of Spain, who scored ippon with o-uchi-gari (major inner throw) on Joanna Ramos of Portugal in the decisive bout, and also to Andreea Chitu of Romania. Chitu defeated France’s Priscilla Gneto in a bout that went to ‘Golden Score’, when finally the Romanian succeeded in closing with her French opponent, bowling her over with a hand throw.

90 Judoka for One Title – First Medal for the Hosting Country
In the men’s under 73 kgs class, which attracted a record 90 judoka, Riki Nakaya of Japan won a largely defensive final against Dex Elmont, in which the Dutchman was penalised for passivity, leaving Nakaya as the winner.

Third places went to Navruz Jurakobilov of Uzbekistan and Ugo Legrand of France, whose medal cheered his watching countrymen as it was their first of the championships, in which France were expected to be more prominent. Jurakobilov defeated Japan’s Hiroyuki Akimoto, in what was the only real reverse of the day for his nation, by countering him for a wazari after Akimoto had earlier scored a yuko with o-uchi-gari (major inner throw).

Legrand had a spinning left uchimata(inner thigh throw) but this was resisted by his opponent, Rinat Ibragimov of Kazakhstan in the bout for the medal. However, Legrand got a yuko for a hold-down and that was enough for victory.

For more information about the surprises, watch here:
http://www.intjudo.eu/News/cikk1965

Check out all pictures in our media gallery: