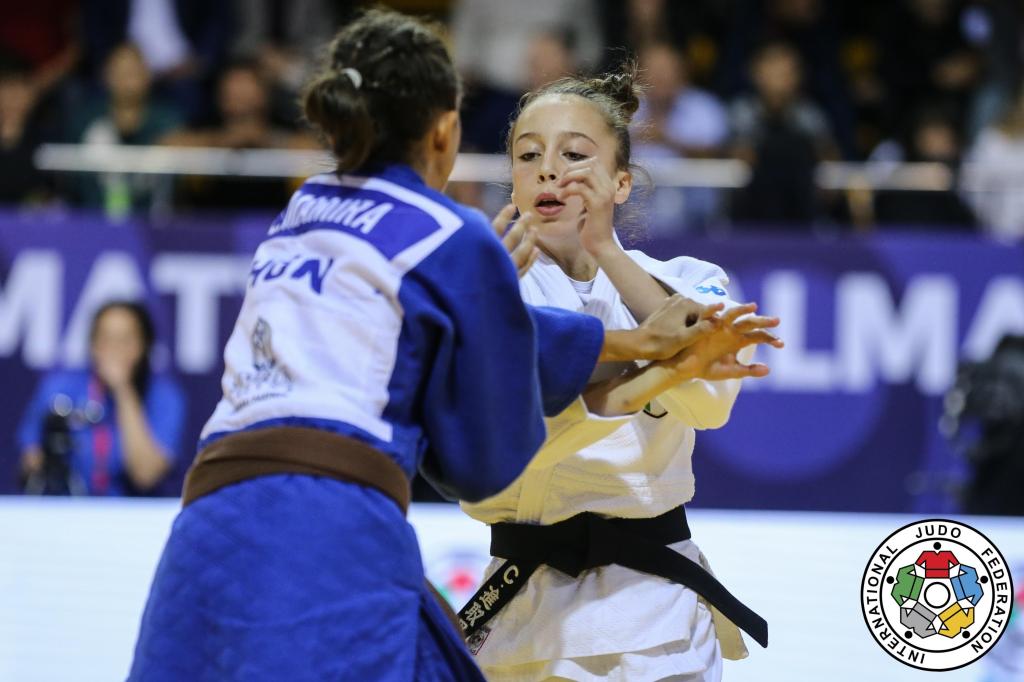 The opening day of the Cadet World Championships being staged in Almaty, Kazakhstan saw MAMIRA Luca (HUN) take the gold medal in the -40kg category. To describe Mamira as a newcomer is an understatement; her international contest record began only seven months ago when she placed 7th at the Follonica Cadet European Cup. Since that start however, Mamira has had seven further outings and has found her way to the final each time, picking up three gold medals, today’s being her biggest achievement in her short career to date.

Mamira’s game plan is not flashy, nor is it awe-inspiring. But it is well planned, well-rehearsed and surprisingly well executed for one so new to the field of high-performance competition. On the unfortunate receiving end of that strategic execution today was first Nigar SHAMAMMADOVA (AZE) who made a single slip in ne waza that allowed Mamira to provide an early display of what is arguably the strongest part of her game. In the quarter-final Mamira faced current Pan-American cadet champion Rebeka VENCESLAU (BRA), the latter falling to a neatly timed de ashi barai that scored waza ari. This proved to be the only score of the contest and was sufficient to put Mamira into the semi-final. Here the young Hungarian faced Sofia AFANASEVA (RUS) in what turned out to be her toughest contest of the day. Neither fighter was able to score during the regulation period and it was only an error in ne waza committed by Afanaseva, pounced on by Mamira that allowed the Hungarian to secure yoko shio gatame and take her place in the final.

Following on from her silver medal performance at the European Cadet Championships Mamira once again Mamira found herself in a final, this time against Chiara DISPENZA (ITA) to whom she had lost in the final of the Continental Cup in Zagreb back in March. But Mamira has developed quickly since that loss and here in Almaty she was ruthless in taking advantage of a ne waza situation, applying a shime waza from which Dispenza failed to submit and was momentarily unconscious. It lasted only two or three seconds. But it was long enough for Mamira to be visibly concerned about her opponent, then realising that she had won and was at that point world champion.

The -40kg category is still a far cry from the regular weight divisions found in the juniors and seniors. Mamira will now tread a path that others have taken before her, none have yet transitioned with any degree of success. But the Hungarian has such a well organised set up that it is easy to see a future for her as a success once she steps up.