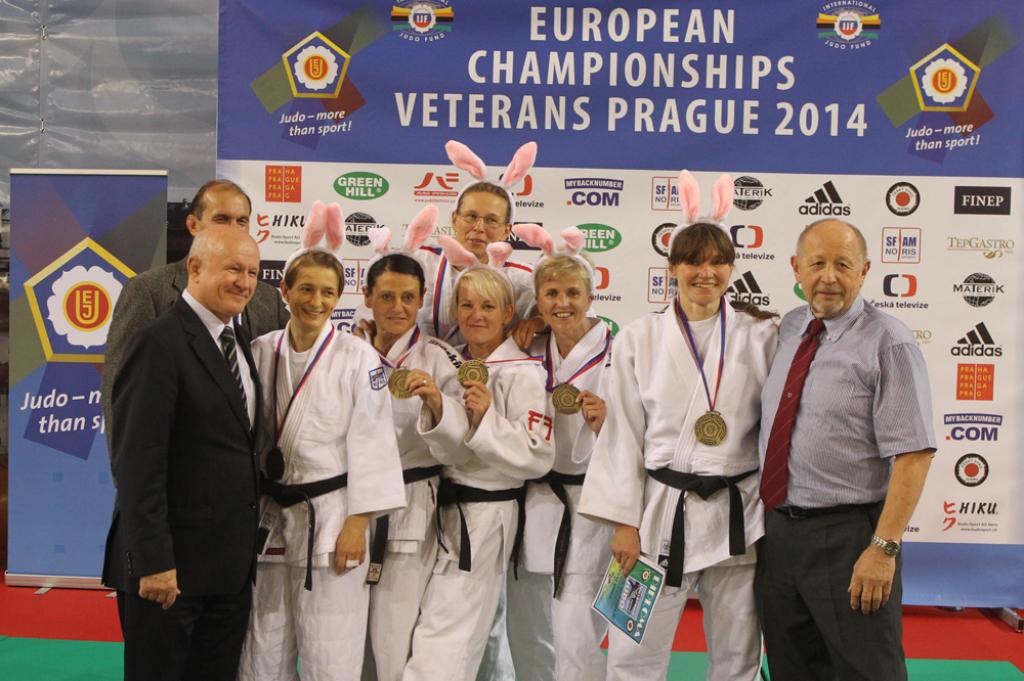 Every team event manages to produce an heroic performance. More often than not it emerges from some unheralded, unsung individual who is able to rise to the occasion and come up with an unexpected result. Here in Prague at the European Championships for Veterans it was the Czech women’s TF40 team who pushed aside the opposition to take gold in front of their excited home fans. Whilst waiting for their final, the Czech women would have seen, or at least heard the cheers, for the German women’s TF30 team as the Germans won an exciting nail-biter 3-2 against the French. Johanna Schumann GER was the hero of that particular match, coming up with a fine ippon to bring victory to Germany TF30. Schumann refused to say whether she would be joining in the team’s celebrations later in the evening, as she had to back to her job as a teacher first thing on Monday morning. One thing is certain with Anika Walldorf on the team there will be a party whatever Schumann’s job commitments. So, with German success still ringing in the ears of the Sparta Arena fans the Czech team faced Germany’s TF40 team. This time there would be no German heroics as the Czech women put on a commanding display to finish 4-1 winners. If truth be told the Russian men did themselves no favours in these team finals, with several fighters simply gifting their contests to their opponents. With so much talent on show one could reasonably have expected six Russian teams taking part in three finals to produce something more memorable or attractive than the subdued and measured contests that, by and large, brought the Veteran’s to a close. In fairness, many of the athletes had given plenty during the individuals and it may be a little harsh to expect repeat performances from athletes of this age.

The full list of results is available by clicking on the following link:
http://www.eju.net/results/?mode=showResult&id=1779