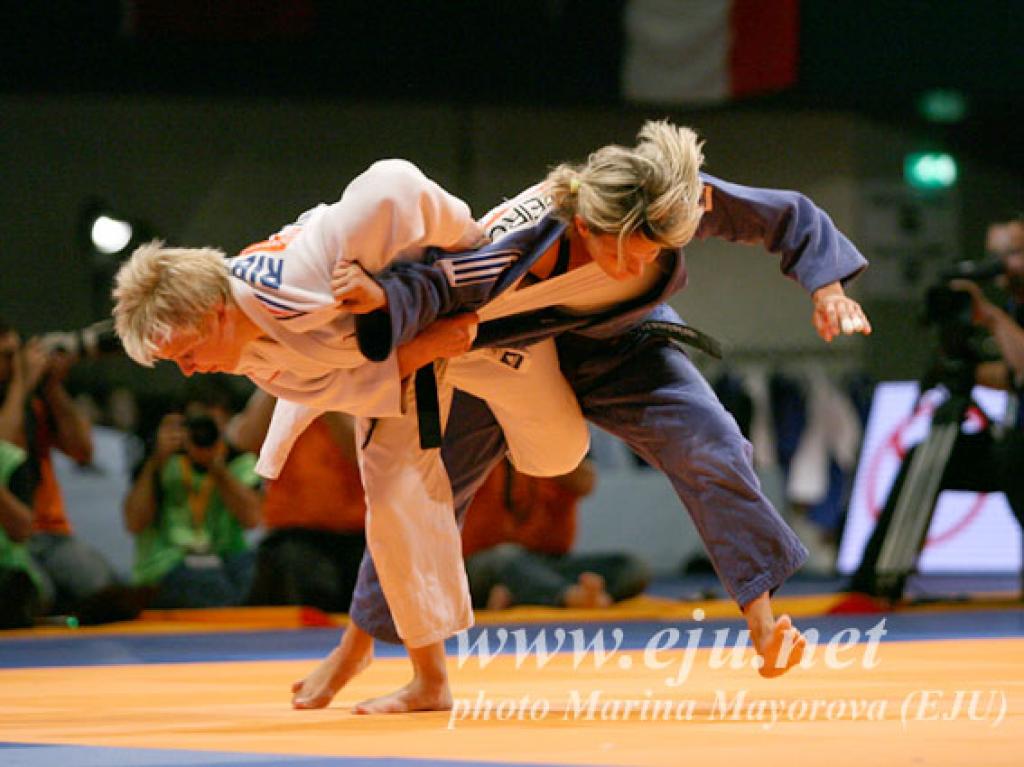 After the collapse of so many favourites yesterday, a sense of normality returned to most of the competition at the Judo World Championships in Rotterdam on Thursday.

Women’s U57kg
After the collapse of so many favourites yesterday, a sense of normality returned to most of the competition at the Judo World Championships in Rotterdam on Thursday.
However, as always, there was an exception, and that was in the U57kg class.

Morgane Ribout (FRA) was the surprise of the day, not only catching the experts off guard, but also her more favoured opponent Telma Monteiro (POR), who had beaten her in the quarterfinal of the European Championships in April.
Ribout had a heavy programme today, but didn’t give any chances to her opponents like Gravenstijn (NED), Lupetey (CUB), Lien (TPE) and in the semifinal she scored a great ippon against Kaori Matsumoto (JPN).
In the final she beat Monteiro with her own tactics and won by shido.

Ribout, with the hair of gold, is now the undisputed queen, gradually coming into form since the beginning of this year, convincing everybody she was better than her compatrtiot Barbara Harel who previously was the star.
Today Ribout was magic with briljant judo. Monteiro finished second again, just like in 2007, missing the chance to be the first ever gold medallist for Portugal.

The bronze went to Kifayat Gasimova (AZE), while Hedvig Karakas (HUN) took the other bronze but is still a junior at the age of 19. She has had a fantastic year and it’s amazing to see how she kept this form for the whole year..

Overall it was a complete European podium in this category: the last time that this occured was Holland too, in 1986 in Maastricht.

Nakamura was the top favourite with convincing wins this year.

But Bermoy was a dangerous outsider as former world champion in the U48kg and last year runner up in the U48kg class.
Misato beat three Asian fighters on the road to the gold, the first for Japan in 10 years in this category.
Of all 15 previous world titles Japan had only won two.

The two bronze medals went to Europe as Ana Carroscosa took the third medal for Spain in only two days of judo.

Romy Tarangul (GER) became the successor of Raffaella Imbriani who was the last German to win a medal in this category.
In the quarterfinal Tarangul defeated Carrascosa who came back with two victories to win bronze.

Men’s U73
Korean Wang Ki-Chun won the U73kg class.
But it wasn’t so easy in this very heavyweight list of participants.
Wang needed to beat some major favourites like David Kevkishvili (GEO), Huysuz (TUR) and Isaev (RUS) in the semifinal.
North Korean Kim Chol-Su upset the Belgian supporters, defeating Dirk van Tichelt (BEL) in the semifinal.
Kim kept strong in the final but couldn’t resist the scores of Wang.
He became only the third male judoka of his country to win a medal at the world championships: The last one was Kwak Ok Chol ten years ago.
Van Tichelt eventually claimed the bronze to the delight of his supporters, beating Huysuz who again finished fifth, just like in 2007.
Mansur Isaev was good for the whole year and confirmed this with a bronze medal beating Rinat Ibragimov from Kazakhstan.