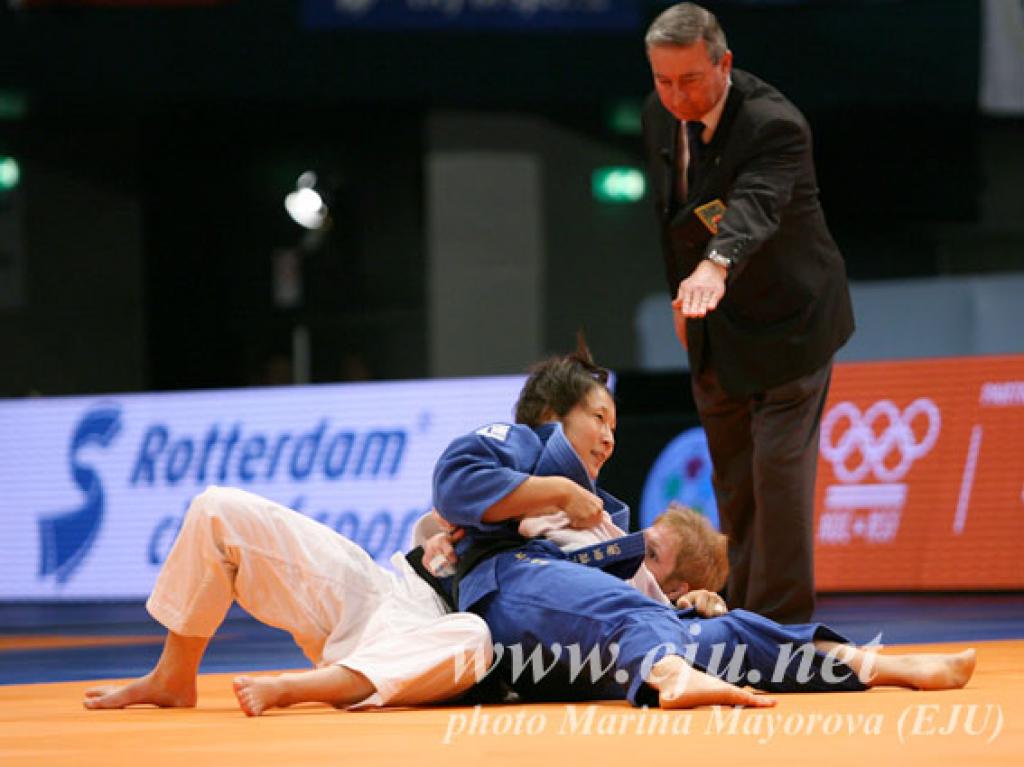 A spectacular bout which lasted over the full competition time plus another full five minutes of Golden Score might have had major influence on the final results in the women´s 63kg category.

Review U63kg:
A spectacular bout which lasted over the full competition time plus another full five minutes of Golden Score might have had major influence on the final results in the women´s 63kg category.

Local star Elisabeth Willeboordse (NED) and Urska Zolnir (SLO) met in the semi-final and gave it all before the referees were called on to decide the outcome.

It was a clear 3:0 decision for the Dutch woman, who had shown more activity and more attacks (albeit never good enough to be rewarded by a point) in the previous ten minutes of an exhausting fight.

Both athletes lost their following bouts. For Willeboordse this meant that she had to settle for silver. Eventual World Champion Yoshie Ueno (JPN) needed less than 90 seconds to win the gold medal match over an exhausted Willeboordse.

UENO, so far without a medal in World Championships, made very clear that she want to claim the position of the new star in this category. She won all her bouts by Ippon, needing 2:20 minutes to achieve this against Vera Koval (RUS): all her other matches were over even faster.

For Urska Zolnir (SLO) the consequences of her marathon against Willeboordse were even worse: she lost her bronze medal match against Claudia Malzahn (GER) in a similar powerless performance and had to leave the event without a medal, finishing 5th.

Malzahn and Zolnir, long term rivals from their junior days, usually give each other a hard time, but in the end Malzahn tends to win. Now their head-to-head score in major events stands 5:0 and Malzahn can be happy about her first medal in world championships.

Before her own defeat, Zolnir had destroyed Ana Cachola´s (POR) hopes for a medal. Cachola had surprisingly beaten and kicked out one of the top favorites, Gevrise Emane (FRA). However, Emane is still reigning World Champion for one more day as she holds this title in the 70kg category.

Alice Schlesinger (ISR) was probably the least expected face among the four medalists. With a handful of top 5 finishes in the past she definitely showed her potential, but her bronze medal is her biggest success so far. She also helped her country to climb up a few steps in the eternal result books: Israel has won only five medals in World Championships so far and Schlesinger is the fourth person and second woman to win a medal. Her predecessors were Yael Arad (silver and bronze), Shay-Oren Smadja and Ariel Zeevi, one silver each.

In the U81kg category Ivan Nifontov promoted himself from European Champion to World Champion. The new star in this category defeated Siarhei Shundzikau (BLR) in the final in Rotterdam.

Nifontov was good the whole year. He was quite a surprise winning the bronze at the Grand Slam of Paris, but when he became European champion he was still able to keep his form and won the Grand Slam in Rio in July.

Nifontov made a very successful debut, while his opponent Shundzikau was already present at World Championships eight years ago.

Seven of the top eight fighters are from Europe which is quite surprising compared to the Olympic Games when Mongolia, Brazil and Korea were also in the top eight in this category.