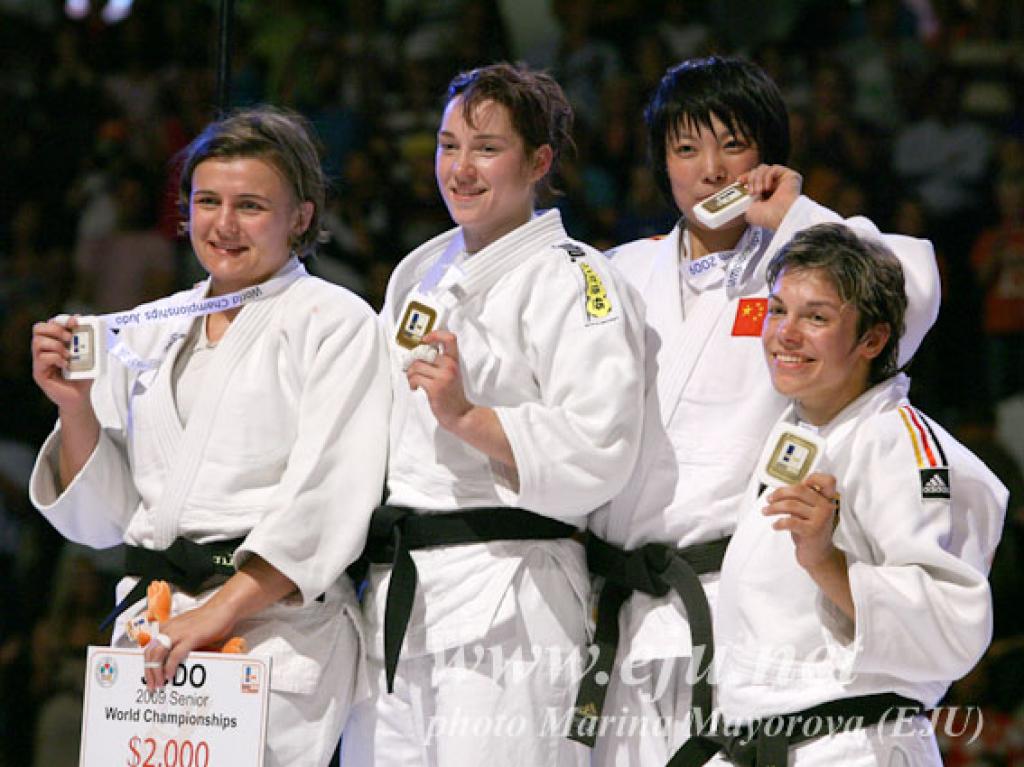 In the women’s -78kg category the host country eventually won their long awaited gold medal. But Marhinde Verkerk (NED) had to go the extra mile for it. After wins over Jeong Gyeong-Mi (KOR) and Alena Eiglova (CZE) she had to deal with Celine Lebrun (FRA).

In her next bout against Esther San Miguel (ESP) she had to go into overtime again, but could win by Golden Score.
With another bout of full five minutes in her gold medal match against Maryna Pryshchepa (UKR), she might easily be the athlete who spent the most time on the tatami today.

However, her efforts were rewarded and she put herself into the elite circle of only now six Dutch women who have been World Champion.

Even though Pryshchepa lost her final match, with her silver medal she achieved the best result for Ukraine women ever. So far a bronze medal (from 1995) was their best.

Both of Verkerk´s defeated opponents, Celine Lebrun and Esther San Miguel, lost their evental bronze medal fights and left the spots on the podium to Heide Wollert (GER) and SUN Yi (CHN).

U90kg
Korea’s Kyu-Won LEE needed only 2 minutes and 13 seconds to secure the gold and his first world title in the final of the Men’s -90kg division against Kirill Denisov of Russia in Rotterdam.

Lee threw his opponent hard on the mat and scored Ippon. His victory was a major surprise, as his only major result so far was a second place at the 2008 Grand Slam of Tokyo. Like Denisov, Lee was making his debut at world championship level in Rotterdam.

Denisov cruised to the semifinal by beating all his opponents by Ippon quickly. In the semifinal, Dilshod Choriev (UZB) showed more resistance until succumbing to the Russian in the last seconds of the match when the referees discussed and decided to award Denisov a yuko point for an action.

Another prominent competitor in this category, the 2004 Olympic champion (-81kg) and two-time world silver medallist (-90kg) Ilias Iliadis (GRE), was eliminated in the second round by Randl.

U70kg
Not many people would have forseen a gold medallist from Colombia in the Women’s -70kg category, except for one person, Yuri Alvear herself.

But after she defeated fromer World Champion Edith Bosch in her first appearance on the tatami, the crowd and the experts started to take notice of her, for good reason.

While it took her almost 5 minutes to beat Bosch, she finished with Juliane Robra (SUI) in half the time and Erica Barbieri (ITA) she took by surprise after 17 seconds into the bout.

Only the gold medal match against Anett Meszaros (HUN), who presented herself in excellent shape, turned out to be a close fight again, but eventually Alvear was the winner.

Her gold medal is the first judo World Championship medal ever for Colombia.

Meszaros had to deal with Lucie Decosse (FRA) in her first round. They had to go into Golden Score which did not lead to a winner either, but Meszaros won the hantei (referee’s decision) by a clear 3:0.

After the following wins over Houda Miled (TUN) and Mina Watanabe (JPN), she looked like a possible champion, but Alvear destroyed her hopes for gold. However, also the silver medal is the best career-result for the 22-year-old Hungarian. So far she had won bronze in 2007.

With bronze medals for Mina Watanabe (JPN) and Houda Miled (TUN) four continents were represented on the podium, which happened for the first time in the history of women´s World Championships.

This completed the totally unexpected result in this category, with top athletes like Edith Bosch, Lucie Decosse or Catherine Jacques (BEL) ending up without a medal.