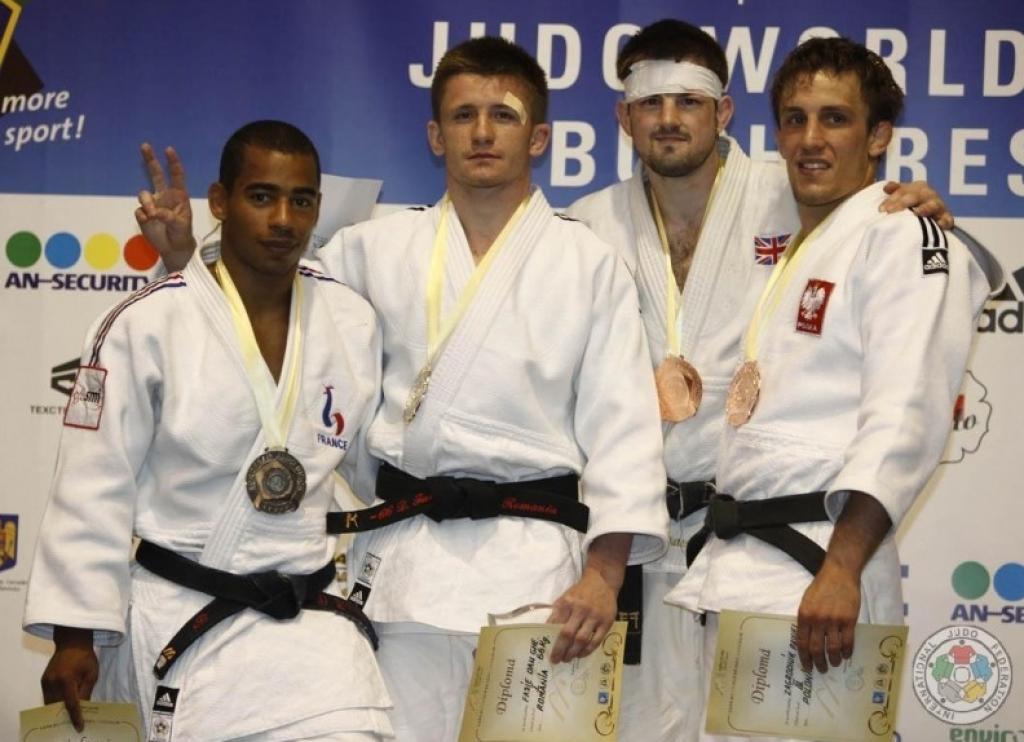 The Romanian home crowd celebrated a victory of Dan Fasie. The Romanian judoka U66kg was Romania’s hope for a long time when he won the European U23 Championship title in 2006, but didn’t seemed to break through. After some other medals he finally impressed with a good victory at the IJF World Cup in Suwon last year where he won the title in a strong Asian field. Today he was able to defeat five opponents and French David Larose as last in the final who had a better international track record.
Fasie beat former European Champion Armen Nazaryan in the semi final. Colin Oates (GBR) who reached the semi final but stranded against Larose won bronze after all. He just won Britain’s third male medal this year after Burton and McKenzie who won the previous two. Pawel Zagrodnik (POL) won his second World Cup medal this year by taking bronze.

Betkil Shukvani is the surprising winner in the category U60kg. The 22-year old Georgian fighter defeated Germany’s Tobias Englmaier who is in a good shape the last couple of months. Despite a lack of medals Englmaier is reaching the top fighters with fifth places at the Grand Slam of Paris, Europeans in Istanbul, IJF Grand Prix in Baku and IJF Grand Slam. A build up to a good medal at World Cup level was expected.
But Shukvani was even more convincing this year with bronze at the World Cup in Budapest and a silver medal at the European Championships. Now he took the gold in Bucharest. Shukvani and Englmaier know eachother a long time and the German defeated Shukvani in 2008 for the European U23 Championships. Shukvani defeated Austria’s big man Lupo Paischer in the semi final while Englmaier came over Issam Nour (FRA) who won bronze together with Paischer.

The experienced Rasul Bokiev (TJK) won his third ever World Cup in his career. Bokiev defeated Iosef Palelashvili (ISR) in the final. The former Russian Champion who fights for Tajikistan won the World Cup in Budapest in 2007 and IJF World Cup in Cairo in 2010.
French Jonathan Allardon won bronze after six fights, as well as Hasan Vanlioglu (TUR) who has now tasted the sweet of a medal several times.

Watch all picture in our Media Gallery here:
https://www.eju.net/media/?mode=showEvent&id=619