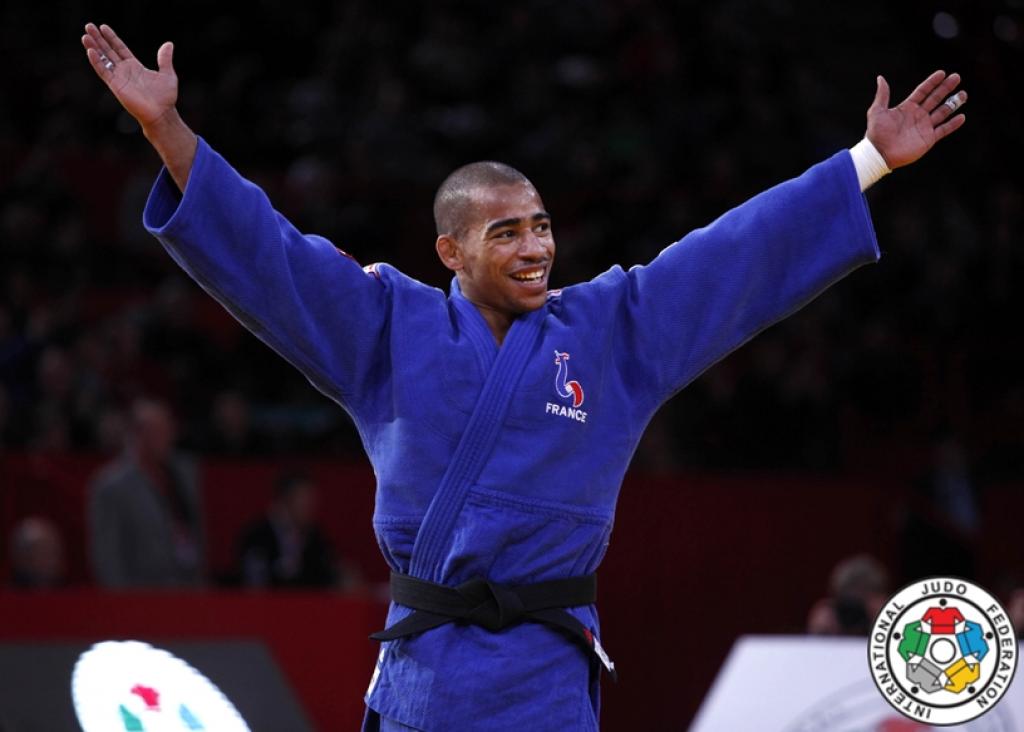 Japan is leading the medal tally after the first day of the Grand Slam in Paris winning three out of seven gold medals. A good indication for the Olympic Games. Europe however only greeted two gold medals. Telma Monteiro won the U57kg division and French David Larose was able to conquer the gold U66kg.
A tough battle in the final. After 5 minutes and the 3 extra minutes of Golden Score, David Larose won the hantei. The first Marseillaise in Bercy.
Larose defeated Jun-Ho Cho (KOR) who was victorious over Khasbaatar Tsagaanbaatar in the semi final. In the second semi-final, Sergey Lim (KAZ) was opposed to Larose.
Good work also by Golan Pollack (ISR) who beat World number 11, Sugoi Uriarte (ESP).

Telma Monteiro (POR) finally won a gold medal again. Last time was the European Cup in Hamburg preparing for the 2011 World Championships, but her last World Tour win was in January last year winning the Masters in Baku.
On Saturday she beat Aiko Sato (JPN) and how? In seven seconds by a tremendous o-ochi-gari for ippon.
Sato defeated to the winner of last year edition Automne Pavia (FRA) in the semi final. American Marti Malloy did a good job taking a bronze medal at such level and her first ever big medal in Europe.

The first two finals of the day were not a surprise. Rishod Sobirov (UZB) won the final U60kg and Tomoko Fukumi (JPN) won the gold U48kg. Fukumi defeated Sarah Menezes of Brazil who defeated the only left over European Alina Dumitru (ROU). By Fukumi’s win, she has now completed the Grand Slam by winning all four Grand Slams in the world: Paris, Moscow, Rio and Tokyo. She is ranked among a small group of judoka, the elite of the world.

Sobirov beat Korean Kim Won-Jin, the first of three Korean finallists yesterday. A very good performance but unfortunately all ending in silver. The last time Korea lost three finals was in 2003 at the Tournoi de Paris, also on the first day and added another lost final on the second day.
Sobirov scored the most impressive ippon of the day after a counter attack.
Amiran Papinashvili (GEO) confirmed his great shape taking a bronze medal.

U73kg Nyam-Ochir Sainjargal (MGL) won the gold in his final against German Christopher Voelk. Sainjarga executed brilliant judo moves the whole day, ending his festival with a great uchi-mata for a ippon that gave him the ultimate victory against Voelk.
The German light middleweight wins an international medal each year, but four years in a row, it’s been silver: nasty habbit.
In this category Europe was the most successful in number of medals:
Gilles Bonhomme won his second bronze medal in Paris, also in 2009.
Zelimkhan Ozdoev (RUS), not ranked in the best athletes of the category, was the second surprise taking bronze.

The final of the women’s U52kg opposed the World number one Yuka Nishida (JPN) and Bundmaa Munkhbaatar (MGL). Although quite in balance Nishida attacked with a o-uchi-gari, combined with a ko-uchi-gari and scored a first waza-ari. The Mongolian had the take risks and once again NISHIDA took the advantage to score for a ippon.
Spanish Ana Carrascosa was finally able to win a medal again among the top athletes. Competitor Laura Gomez, lost her bronze medal bout.

Miki Tanaka regained the gold medal for Japan U63kg after Gevrise Emane had won the previous two editions. The expected Olympian Yoshie Ueno was absent. She won the tournament in 2005 and 2009.
In the final Tanaka, who won her first Grand Slam, met Korean, Joung Da-Woon. Tanaka could immobilize the Korean and won gold.
Elisabeth Willeboordse, the highest seeded player won bronze as well as Alice Schlesinger. Both are in their country in competition, but both seemed to have made a decisive step to qualify.