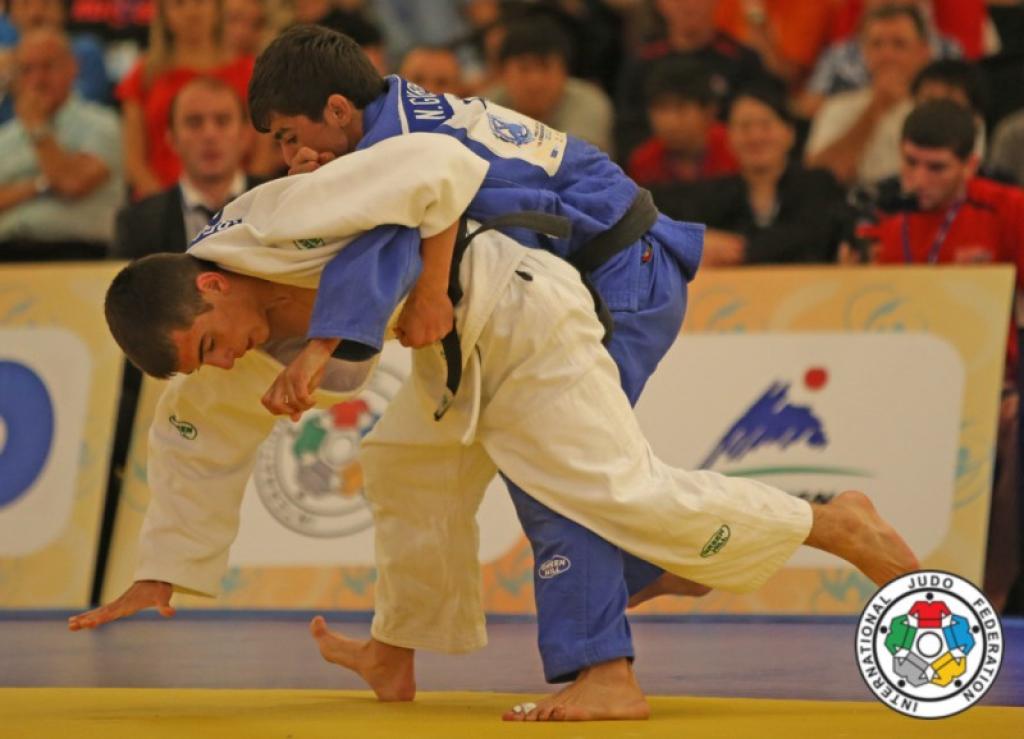 The 2013 Cadet World Championships started in style on Thursday as four champions were crowned on the opening day of the competition at the sun-soaked Doral Legends Ballroom in Miami.

The girls -40kg and -44kg categories were in action on day one along with the boys -50kg and -55kg categories.

All eyes were on the sport’s premier competition for athletes aged 15-17 as the world’s most accomplished young judoka from 80 countries showed their exciting talent on the biggest stage of their career so far.

There was gold for Europe in the category U50kg.

Cadet European Championship bronze medallist Natig GURBANLI (AZE) may only be 16 years old but today he entered the record books after becoming the first Azerbaijan judoka to win World Championship gold at any age group. Robinzon BEGLARASHVILI (GEO) stood between GURBANLI and history in Miami and there was nothing to separate the two standout performers in the -50kg final. That was until the Georgian was penalised by the maximum penalty of hansoku-make with just 30 seconds left.

The first bronze medal was won by Belgian livewire Jorre VERSTRAETEN (BEL) who took the contest to UMEKITA Wataru (JPN) and was rewarded with a place on the medal podium. As the Belgian pressed forward he grew in confidence and first scored a waza-ari with a ko-uchi-gari before sealing victory with a ko-soto-gake for wazari-awasette-ippon. The second bronze medal was clinched by Amartuvshin BAYARAA (MGL) as the judo powerhouse nation made their breakthrough at this level with their first Cadet World Championships medal. BAYARAA was too skilled for Tornike NAGLIASHVILI (GEO) and ended the contest by throwing the Georgian with a morote-seoi-nage for wazari-awasette-ippon.

USA pinned their hopes on Miami judoka Brian ABREU (USA) and he won his opening contest against Ibai GRACI (ESP) in just 12 seconds to earn one of the biggest ovations of the opening day. ABREU finished in a creditable seventh-place after losing at the first hurdle in the repechage.

Fuengirola Junior International winner Bauyrzhan ZHAUYNTAYEV (KAZ) won the -55kg title as Cadet European champion and 2011 Cadet World Championships runner-up Elios MANZI (ITA) suffered a flashback to his last appearance on the world stage. MANZI, 17, was on the verge of victory as ZHAUYNTAYEV had received a shido for a false attack which was the only margin to separate the rivals with nine seconds left. As the Italian was reluctant to press forward he was inevitably penalised for passivity to send the contest into golden score. The momentum was now with the Kazakhstan judoka and he profited further as MANZI received a second shido for passivity after 44 seconds of extra action.

Japanese starlet YAMAUCHI Honoka (JPN) took command in the lightest category as she was crowned Cadet World Champion after defeating Leyla ALIYEVA (AZE) in the -40kg final. ALIYEVA, who was already the Cadet European champion, was caught by Berlin Cadets European Cup winner YAMAUCHI in ne-waza as the Japanese teenager locked on a koshi-jime and kept turning until her opponent was forced to submit. ALIYEVA, 15, swept past Aniek NORDER (NED) in the semi-final with an ouchi-gari while YAMAUCHI had powered past Tsvetelina TSVETANOVA (BUL) at the same stage with a kami-shiho-gatame.

The first bronze medal was won by TSVETANOVA who bounced back from her semi-final defeat in the best possible fashion as she raced to victory against Adiya SAIYN (KAZ) after 50 seconds by ippon. The second bronze medal went to Pidesti Cadets European Cup bronze medallist Juliana RODRIGUES (BRA) who edged out NORDER by a yuko.

-44kg: SUZUKI scales to the top of the world

Japan repeated their -40kg triumph in the next category up as Berlin Cadets European Cup winner SUZUKI Mari (JPN) defeated Kincso MIHALOVITS (HUN) in the -44kg final. SUZUKI faced a fast-rising challenger as MIHALOVITS had clearly made substantial progress since taking fifth-place at European Championships in June. SUZUKI showcased Japan’s ne-waza once more as she adjusted from a yoko-shiho-gatame to a mune-gatame to hold the Hungarian for ippon. SUZUKI had defeated surprise package Estefania SORIANO (DOM) in the semi-final after the Dominican Republic judoka caught the eye by overcoming reigning Cadet European champion and European Youth Olympic champion Amber GERSJES (NED) in the first round. At the same stage MIHALOVITS shocked former Junior Asian Championships bronze medallist KIM Jaeryeong (KOR) as she booked a place in the final by ippon in just 15 seconds.

The first bronze medal was secured by the hard-working Anastasya TURCHEVA (RUS) who ensured KIM would be on the receiving end of successive defeats. With 55 seconds left the Russian come to the fore as she eventually unlocked the arm of KIM and leaned back to secure an juji-gatame which forced the Korean to submit. The second bronze medal was presented to Marusa STANGAR (SLO) who bested SORIANO. The contest was decided when the Slovenian neatly evaded an ashi-waza attempt from SORIANO to drive her rival over with a drop seoi-nage for ippon.

Check out more photos in our MEDIA GALLERY