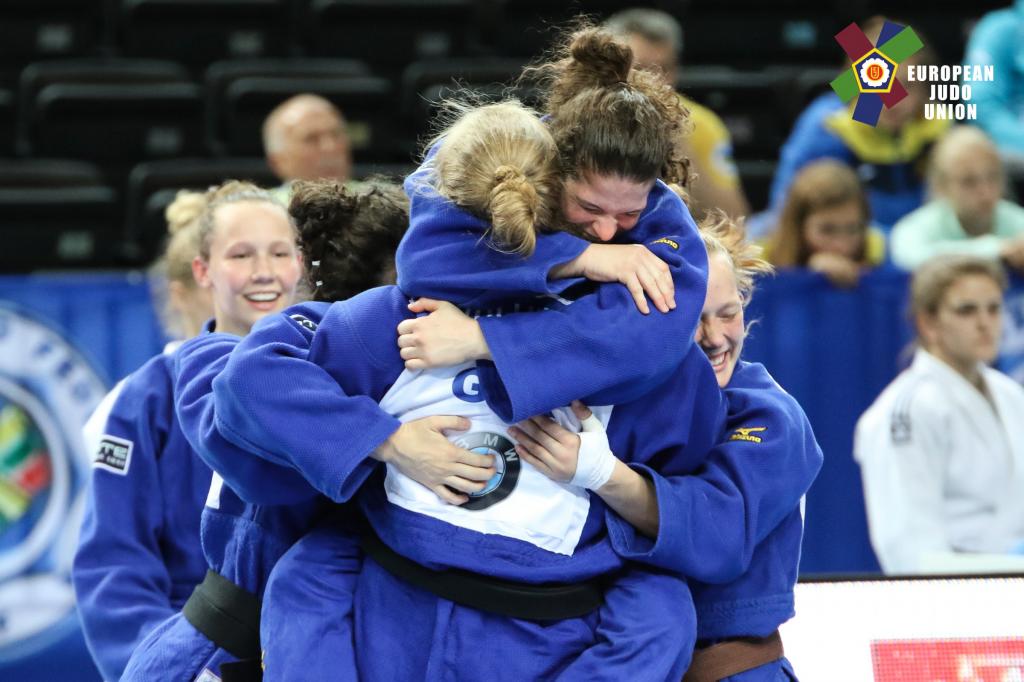 The 2017 Cadet European Judo Championships has officially come to an end with the team event taking place on the last day of the tournament. The Georgian boys’ team managed to defend their Cadet European Team title, whilst Germany took the crown of the girls’ team event.

Georgia started the day as top seed and eliminated Greece with a 5-0 outcome during the second round. In the quarter final, Georgia opposed Italy, where Alessandro MAGNANI (ITA) was the only one to score against the Georgian team when defeating Lasha BEKAURI. The outcome of the match up was 4-1 for Georgia. It was time for the semi-final against Russia. The winner of the -60kg weight division, Kazbek NAGUCHEV led the Russian team forward when overcoming Saba KAPANADZE. The following three contests was concurred by the Georgians which meant an immediate spot in the final. The end of this match up resulted a 3-2 display on the score board. Rematch of last years’ final saw the Hungarian team once again trying to challenge the coronet holders, yet, the 4-1 end indicated the ineffective attempt, allowing Georgia to defend their title. Georgian cadet boys coach, George KIZILASHVILI (GEO);

“We have a very strong team. Our country is small but our spirit is huge and this makes us a strong team to fight with. They work together every day, they love each other, and look, this is the result. Both, the semi-final and the final were strong. Russia has strong team like us but Hungary has also good team.” 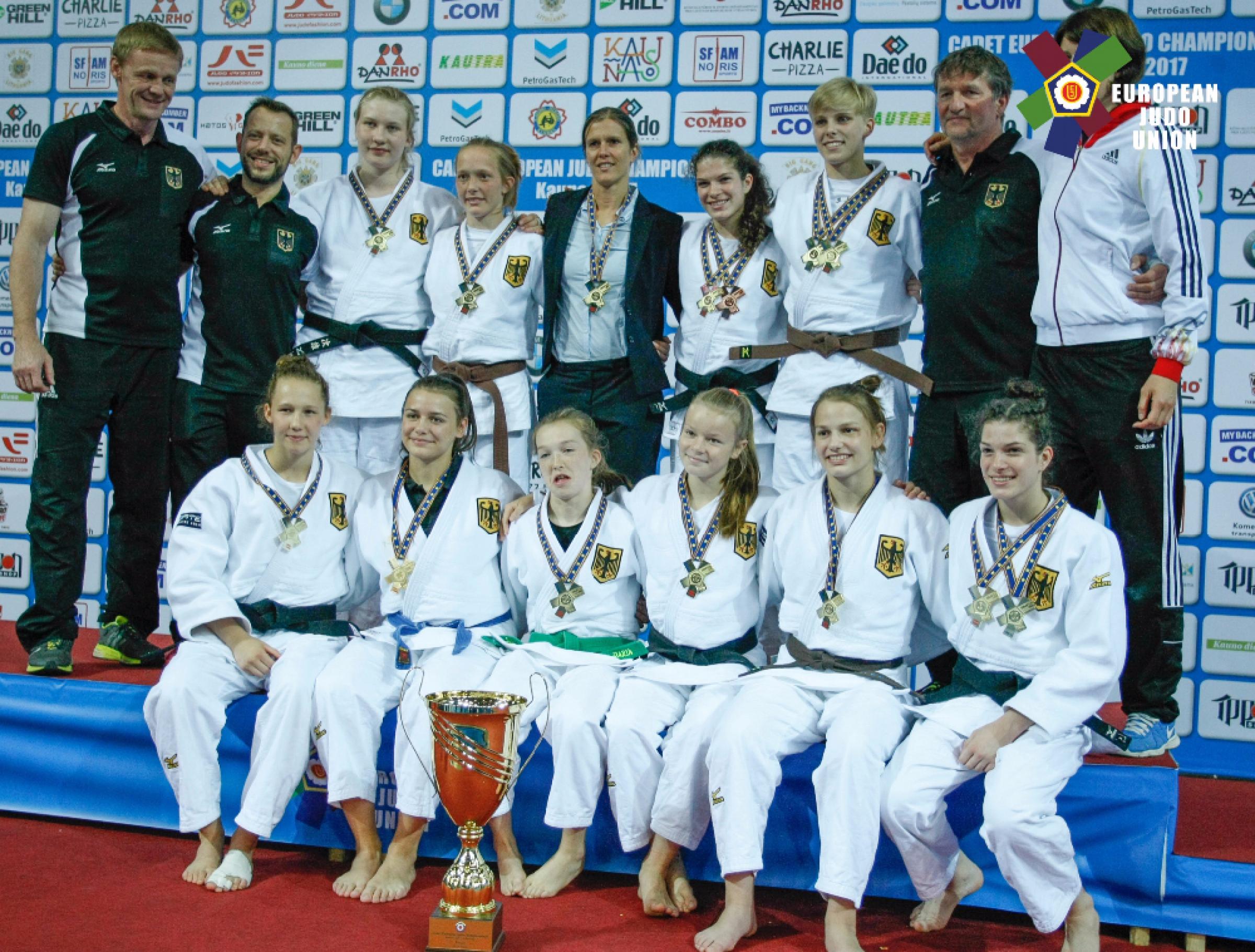 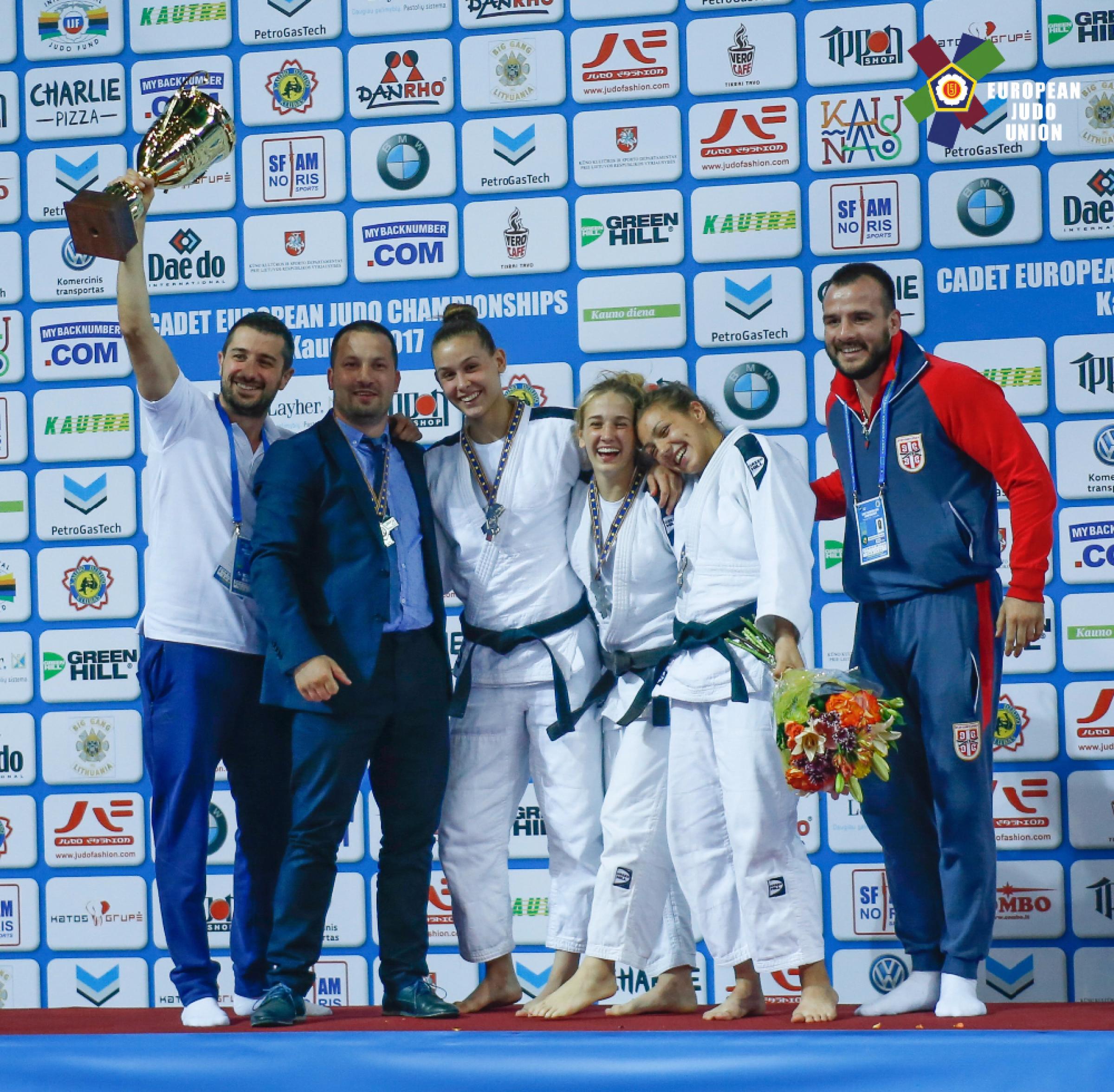 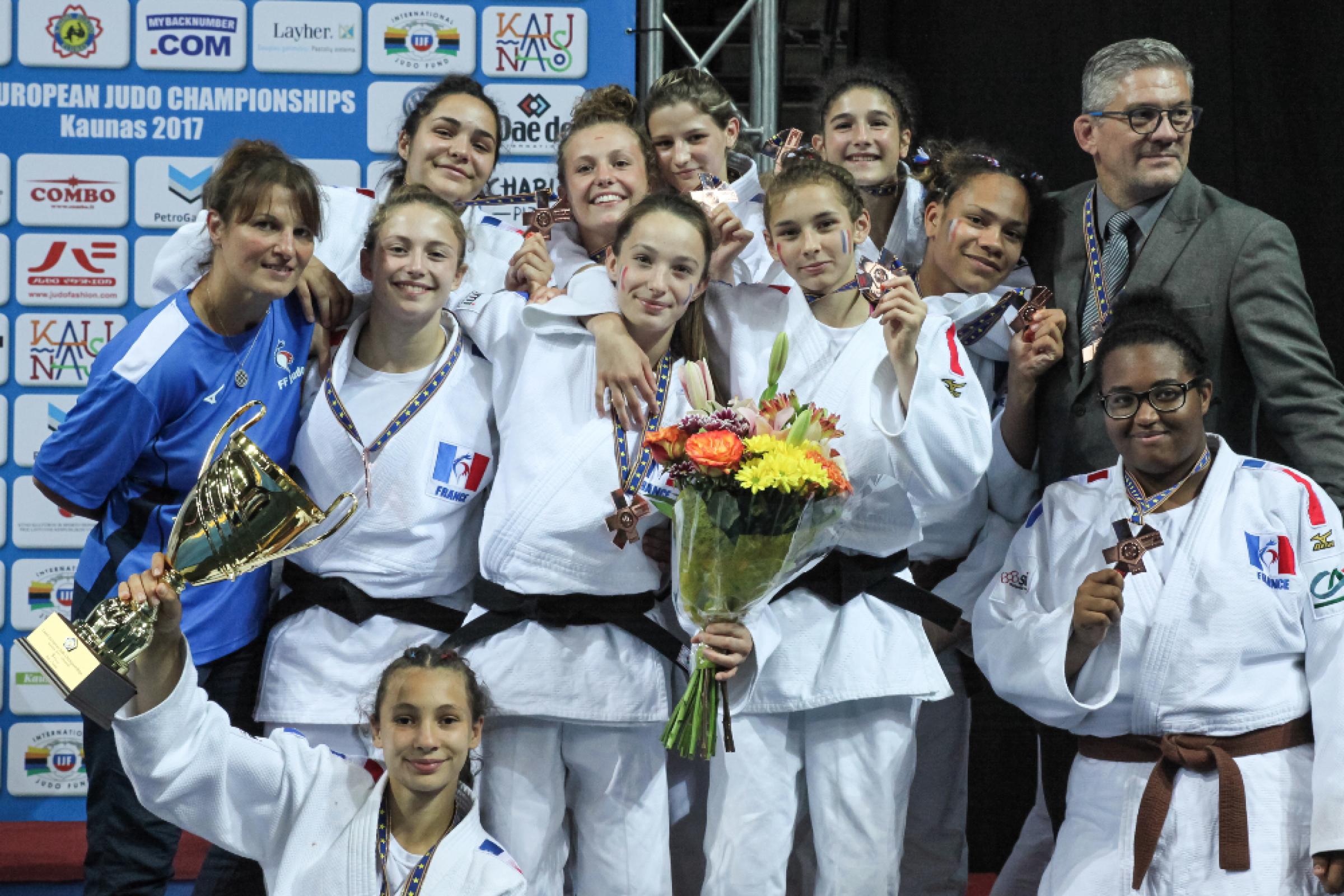 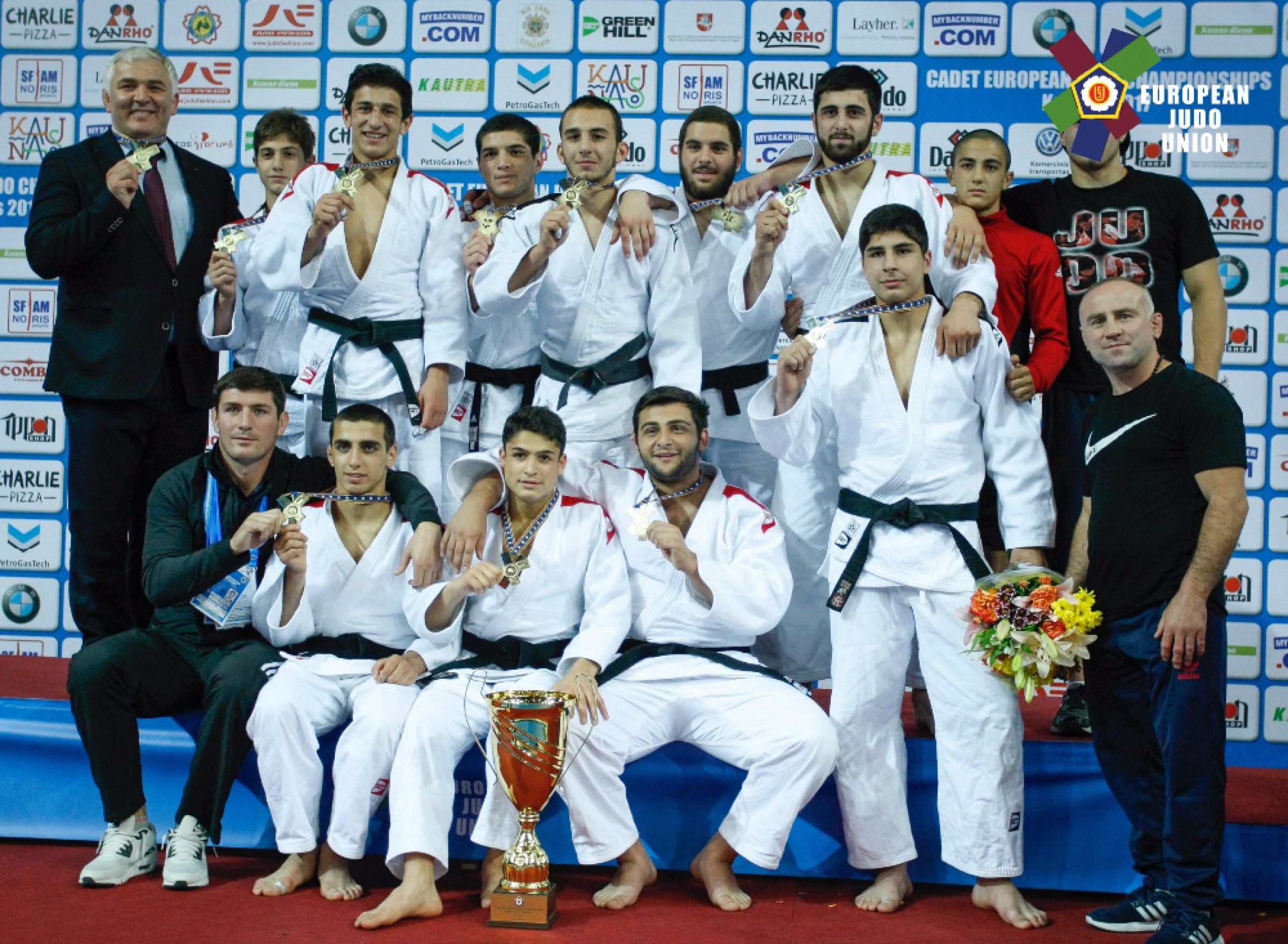 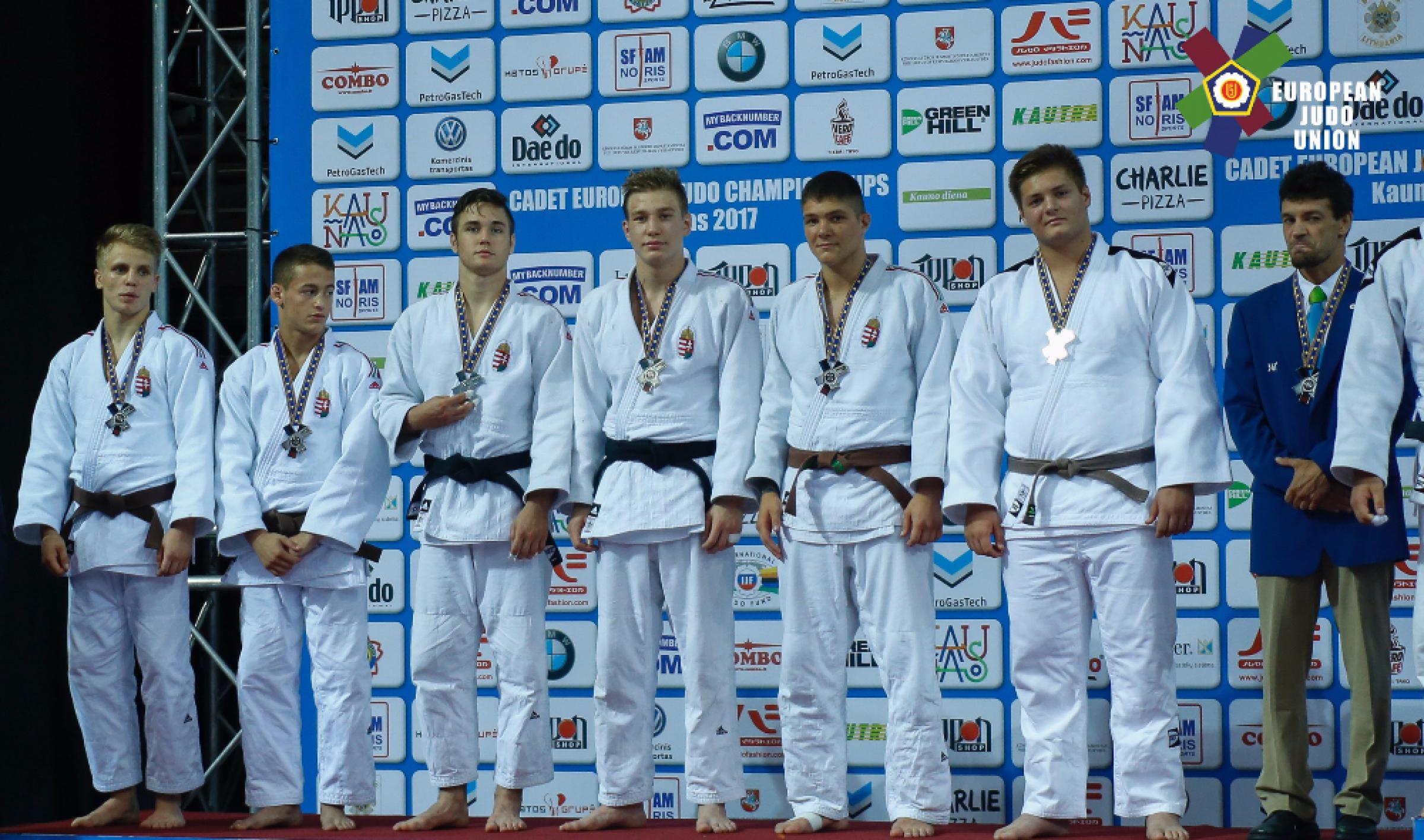 Germany overcame a few years of darkness and finally not only managed to book a spot on the team podium but gained the girls’ Cadet European Team title. Germany began the day with a tight match up against Italy. Winner of the -70kg, Marlene GLANANDI saved the German team when defeating Martina ESPOSITO (ITA) bowing off with the 3-2 outcome in their favour. Another close-fitting followed when facing the Dutch team and with an added 3-2 outcome the Germans pulled through to the quarter finals; where yet again with a stretched match up sent Russia to the repechage. There it was, Germany vs France in the semis, where the German team showed a 4-1 dominating performance to than move onto the final against Serbia. The team [Serbia], which had only three players on board and proved a 100% success until up to the final. The German team needed only one win to take glory, which they delivered right away during the first contest between Mascha BALLHAUS (GER) and Andrea STOJADINOV (SRB). Germany’s golden talisman, Mascha BALLHAUS;

“I had a little pressure in the final because we missed our -57kg judoka. I always lost against Stojadinov except two days ago when I won against her in the final. Today, I wanted to show that it wasn’t an accident and I hope now I can win more often. We lost in the past years during the team event. It was an absolutely perfect weekend for us and winning the team event was the icing on the cake. We trained so hard together in the past years, we travel together and work together. We are an absolutely great team.”

“Last year we didn’t get a medal and we couldn’t have our top team for today neither as our -57kg player got injured so we had to put one of our -52kg player and she has done an excellent work. It is always hard to compete after the individual competition but we had an excellent team spirit and that is part of what allowed us to win gold today. In the final, we knew that we had to win one fight to get the gold. The Serbian team had a strong line up, all of their three players are very good. I knew we will have to fight for the gold and it won’t be easy. Now we can celebrate with those who supported us.”