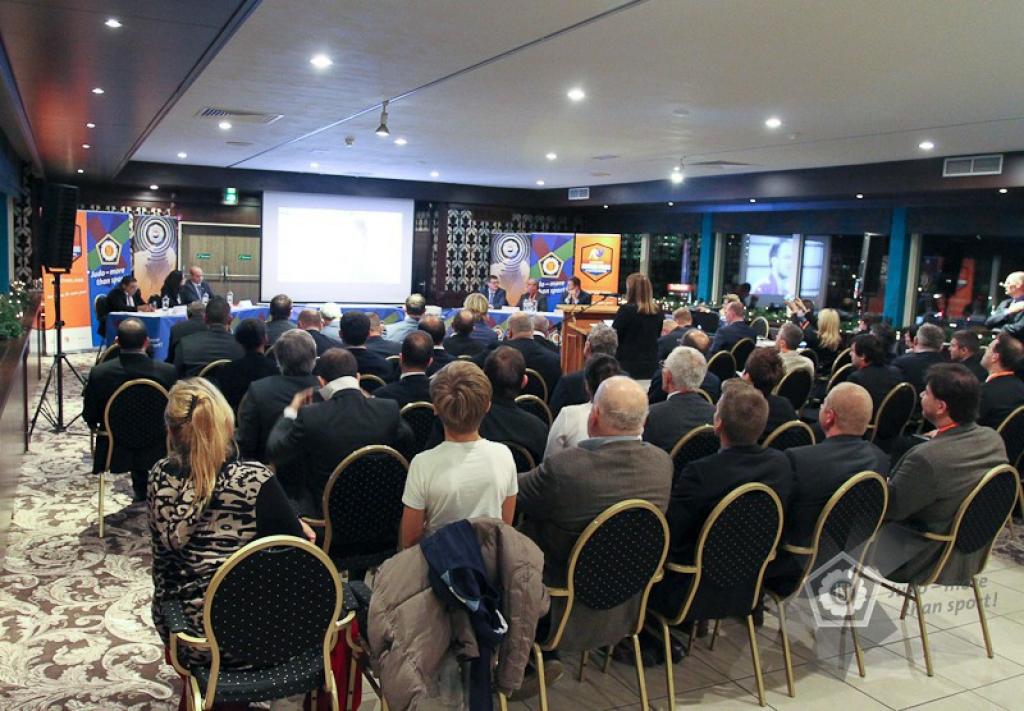 Olympic bronze medallist of 2004, World Champion of 2005 judo icon, Dennis van der Geest opened the draw of the 2014 European Club Championships (ECC). “Warm welcome here in Harleem, it’s my birth city. My father started a judo club called Kenjamu Haarlem in 1971, and now we are here and hosting this tournament at our town. We have the total number of 29 teams across 13 countries, it is a big European event and we are really delightful to host this event. Judo is an individual sport but I think team event is important too. Tomorrow athletes not only fight for individuals but with teams. I wish good luck to all of you for tomorrow.”

17 male, 12 female teams will be the line-up for tomorrow. Since there are two level of competitions in one weekend, and having open entry for the ECC in place, seeding system had to be established. Teams with the highest world ranked players will benefit of perhaps being rescued of the first round. This led us to the following outcome.

Across the women teams, number one seeded Cortaillod (SUI) will face the winner of Kenamju Haarlem (NED) and Jenos Kwai Hooglede (BEL). Head coach of team Kenamju Haarlem, Benito Maij had the following thoughts after the draw: “I think we have a good first match against the Belgium team but we have a very hard one on the second round so that will be a hard fight. Our team is not based on our world ranking but girls who can make good results and hopefully the home crowed will top it up.”

For Noord-Oost (NED), to make it to the final, they will have to overcome team JCE Argenteuil (FRA) who has the World Champion and WRL leader Clarissa Agbegnenou on their list too. “I am fighting a weight class above so I will use this tournament as a training… it will be easier than other events because I have the support of my club and we are like a family. Our team doesn’t look so strong on paper but I know we are capable to win tomorrow.”
Café & Co Vienna Samurai (AUT) will face the winner of Sainte Genevieve Sports (FRA) and Shabolovka Moscow (RUS), whilst Istanbul BBSK (TUR) has Hercules (NED) to defeat in order to go through to the second round.

The two Georgian teams ended up one on each side of the draw where, number one seeded, Fighter Tbilisi will be up against Ben Rietdijk Sports (NED) whilst Sagaredjo FF Superstars will test Judo Club Rakovica (SRB) in the first round. The Vice-President of the Georgian Judo Federation, Mamuka Kiziashvili will lead team Fighter Tbilisi whilst, 2008 Beijing Olympic Champion, Irakli Tsirekidze will prime team Sagaredjo FF Superstars.

Home favourite, and number two seeded, Keanmju Haarlem (NED) will begin the day with the match up against Galaxy Judo Tigers (AUT). Can they take the victory? Kenamju Haarlem male head coach, Maarten Arens admits they have their eyes on the gold, however they know it won’t be like walking in the paradise tomorrow: “The goal is of course to get the gold medal as well as to go up to the Golden League for next year, but the Georgian team is very strong. I have a really good team with the Elmont brothers, Grol and Van T’End… it is a very strong team, but we know the Georgians are also strong. We will definitely do our best and see what happens tomorrow.”

Sporting Clube de Portugal (POR) will be facing the Red Star (SRB) while Stockholms Polisens IF Judo (SWE) has to stun Noord-Oost (NED) to make it through to the second round.

The competition start at 10.00AM local time. Live results as well as the live stream available via www.eju.net
ECC: #ECCJudo2014