Without shadow of a doubt, the player of the day on day one of the Olympic Games 2021 was Distria KRASNIQI of Kosovo.

From the offset she was clearly on a mission and today was her day. Following in her team mate and training partner, Majlinda KELMENDI’s footsteps, she rose to the occasion in the Nippon Budokan to take golden glory.

In 2016, Kelmendi took the first Olympic gold in her country’s history, now with another added, they have two titles in as many games, with more athletes to come. It is a tremendous achievement to say the least for a small nation, but this small team achieves big results and it was a delight for the delegation cheering on their athlete.

The world ranked #1, Krasniqi, started her day against Gabriela CHIBANA (BRA) followed by a quarter final win against Chen-Hao LIN (TPE). It was a straight forward morning for the current European champion who faced the 2013 world champion MUNKHBAT Uranstetseg (MGL) in the semi final. The Mongolian proved on numerous occasions throughout the day that her vast experience meant she had an edge on her younger opponents, but not in the case of Krasniqi.

The gold medal means a lot to me and all my country, it’s a second medal from the Olympic Games, we have two medals already, in Rio 2016 and now in Tokyo, hopefully we will go back home with more medals from this Olympic Games.

It was an early score on the board which lasted the remainder of the contest, a score that earned the Kosovo representative a place in the Olympic final. Already it was a chance to celebrate, both herself and coach, Driton KUKA were above and beyond pleased with her achievements, but there was one more step. 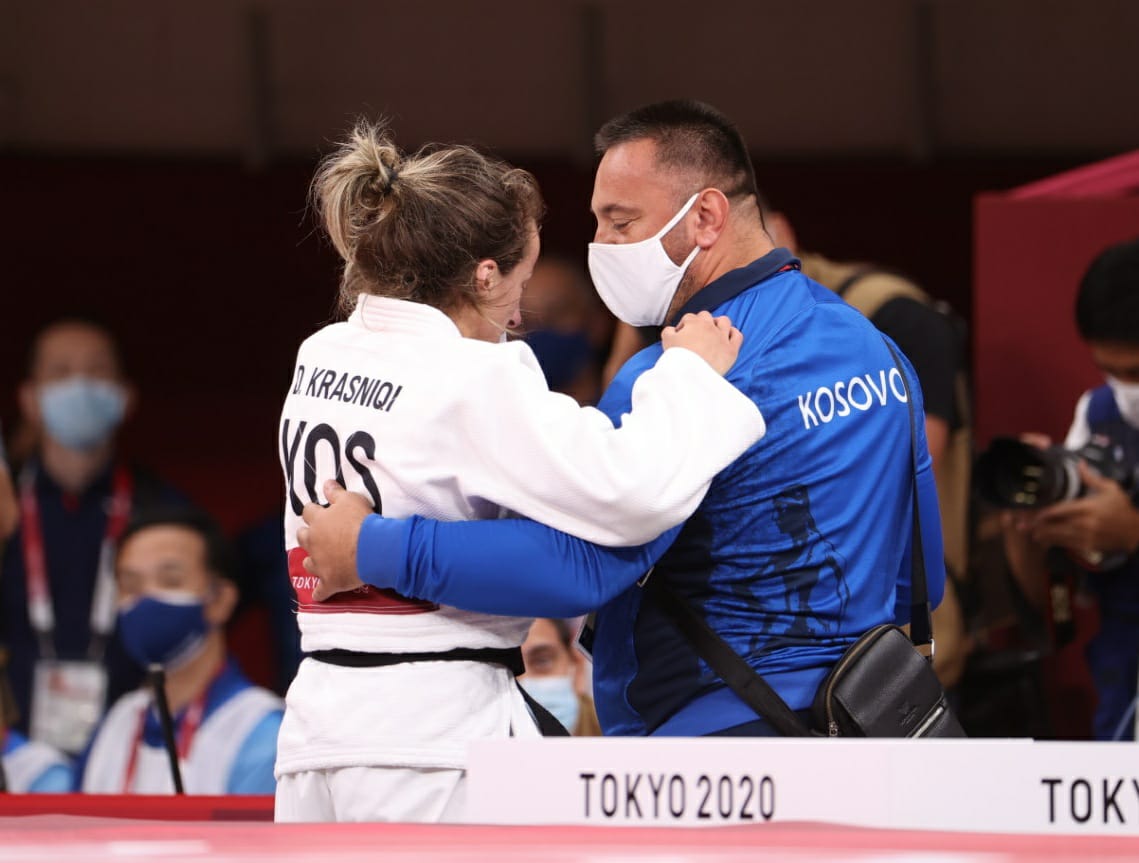 A daunting task, a final against the home favourite, TONAKI Funa (JPN). This didn’t deter Krasniqi though as she took the fight to her Japanese opponent. It was an even exchange between the pair, with a couple of worrying moments in ne waza but with a matter of seconds left on the clock, a signature uchi mata scored waza ari and in turn Olympic gold. For the next three years she will wear the hard-earned golden back patch.

The final was the hardest fight and when I threw her in the last seconds, I was thinking I WIN I WIN. The last seconds where so stressful and felt like hours. It’s a great feeling taking a gold medal from the Olympic Games in Japan, I’m very happy and proud that all the hard work paid off at the right time. What makes it even more special is winning against the Japanese in final.

Now we have two Olympic gold medals for Kosovo – that is crazy for me as their coach. It is an absolutely amazing feeling, I can’t explain how I felt after the final match today. In the morning I told Distria that today nobody can beat her. I really had the feeling that Distria can win the gold medal and finally she did.

I am sure that in Kosovo all fans are celebrating this gold medal. Again a gold medal in Judo. That’s crazy.