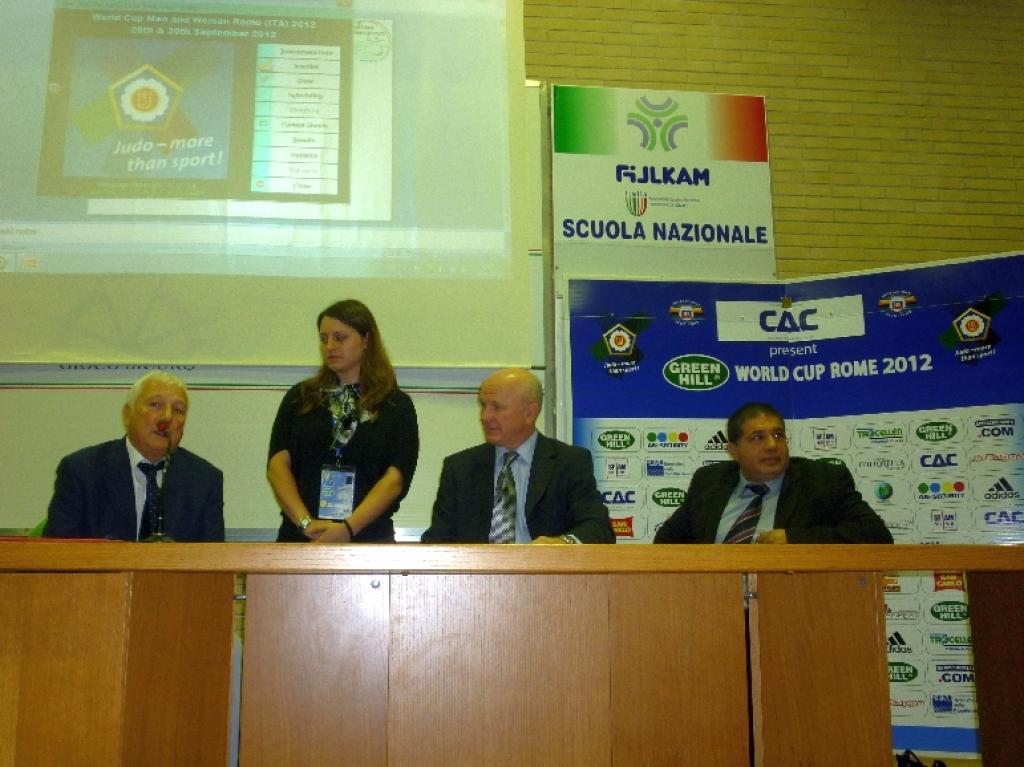 Sports Director Antonio di Maggio of the Italian Judo federation welcomed the coaches for their participation at the Green Hill World Cup in Rome. In total 312 participants from 37 nations will fight for the 56 medals. Not common that the men and women are fighting together. For the last time in Rome this was the case in 2002, ten years ago with winner Giuseppe Maddaloni (ITA) who was at that time the Olympic Champion and now a coach.

Not on the tatami but next to the tatami will be Olympic Champion Urska Zolnir who is active as a coach for some Slovenian athletes at this World Cup.

The only Italian athletes who won a medal at the Olympic Games, Rosalba Forciniti is not yet going to compete, she is enjoying a break, but will attend the event this weekend.

Some of the big names who are present in Rome are: Last week’s winners in Tampere: Ludwig Paischer (U60) Grzegorz Lewinski (U66) and Piotr Kurkiewicz (U73) from Poland. Last weeks European U20 Champion Alexios Ntatsidis (U81), Italian potential medallist Frencesco Bruyere (U81) and Domenico di Guida (U100).

Among the coaches Olympic medalists such as Nicolas Gill (Sydney 2000) who arrived here in Rome early this week to participate in the Olympic Training Centre. Gill brought 16 young athletes from Canada and is building up a new team. 1992 Olympic medallist Theo Meijer (NED) is club coach for some of the Dutch athletes. 1980 World Champion Jane Bridge is coach of the British team. Italian coach Felice Mariani obviously attended the draw. He won an Olympic bronze medal in 1976 and three World Championships medals and is one of the leading examples as a coach for the current judoka.
All they witnessed the draw executed by EJU Vice President Michal Vachun.

This week the EJU Directing Committee was gathered in Ostia’s Olympic Training centre to have their DC meeting this week. All in all many good athletes and former athletes to make the Green Hill World Cup to a spectacular event to watch.

Watch the pictures this weekend in our media gallery:

We hope you follow the live video stream tomorrow:
http://www.ippon.org/wcup_ita2012.php?