Draw of the EJU European League and Club Championships in Istanbul 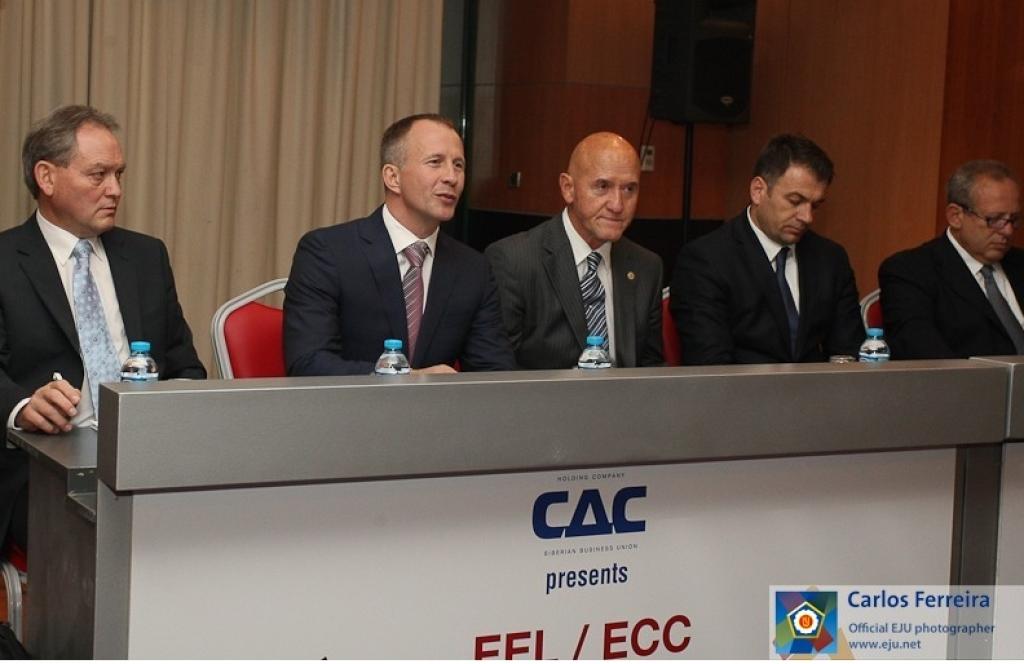 On Saturday the adidas European Club Championships and EJU European League will take place. On Friday evening the draw of the two the European Judo League took place in the presence of EJU President Sergey Soloveychik and Turkish Judo Federation President Fatih Uysal, the draw of the adidas EJU European league was executed. Vice President Sports Michal Vachun led the draw in joint cooperation with EJU Sports Director Pavel Yasenovski and in the presence of EJU Referee director Jan Snijders.
The draw for the adidas European Club Championships will be done on Saturday in the venue.

Turkish Judo Federation President Fatih Uysal wished everybody welcome to host city Istanbul: “It is very important for us to have this competition for the development of our clubs and we hope that in the future we will have more participating clubs at the European Club Championships”.

The five teams for the European league for men are a pool of three clubs:
Izmir BSB (TUR), Saint GENEVIEVE (FRA) and New Stream (RUS), and a semi final between Galatasaray (TUR) vs. Sporting Clube de Portugal (POR).
The first two teams of the poule will fight for gold and a place at the European Club Championships
In the women’s competition the draw was Galatasaray vs. ACSPC Mulhouse (FRA) and Trabzon (TUR) vs.Yawara-Newa (RUS).

Vice President Sports Michael Vachun added an important change: “There will not be a hikiwake (draw) situation anymore at Club Championships. Each fight has a winner, so the team match will be decided by wins. The technical points are of no importance anymore.“

“The full eight team will fight in the men’s division, in the women’s division 7 teams. Three medalists from last year and the winner of the morning tournament will be added to the European Club Championships in a free draw, only the nations will be separated.”

Referee Director Jan Snijders addressed the importance of this championship. Snijders: “We have the best 15 referees of Europe here in Istanbul. These European Club Championships are very important. The 29 medals at the Olympic Games were a tremendous success, but still we need to have the good grip. Without Grip within 5-10- seconds a penalty will follow: without a grip no judo.”

He proceeded with the technical notes. “Also for the cross guard grip an attack should follow. According to the rules, no attack at a cross guard grip a penalty will follow. Without these measures our sport don’t need to have changes.
The results are important but also the style of judo. I hope we can say that These European Club Championships is the most exciting day of the year. The clubs are the examples and it’s important that the clubs have success.”

In total 15 clubs from five countries with 117 athletes will fight for the top positions.
Last year Levallois from France won both the men’s and women’s competition.

The European Judo league competition will start at 09:00h, at 13.00h the European Club Championships are scheduled. Watch the whole event live in results and video broadcasting.