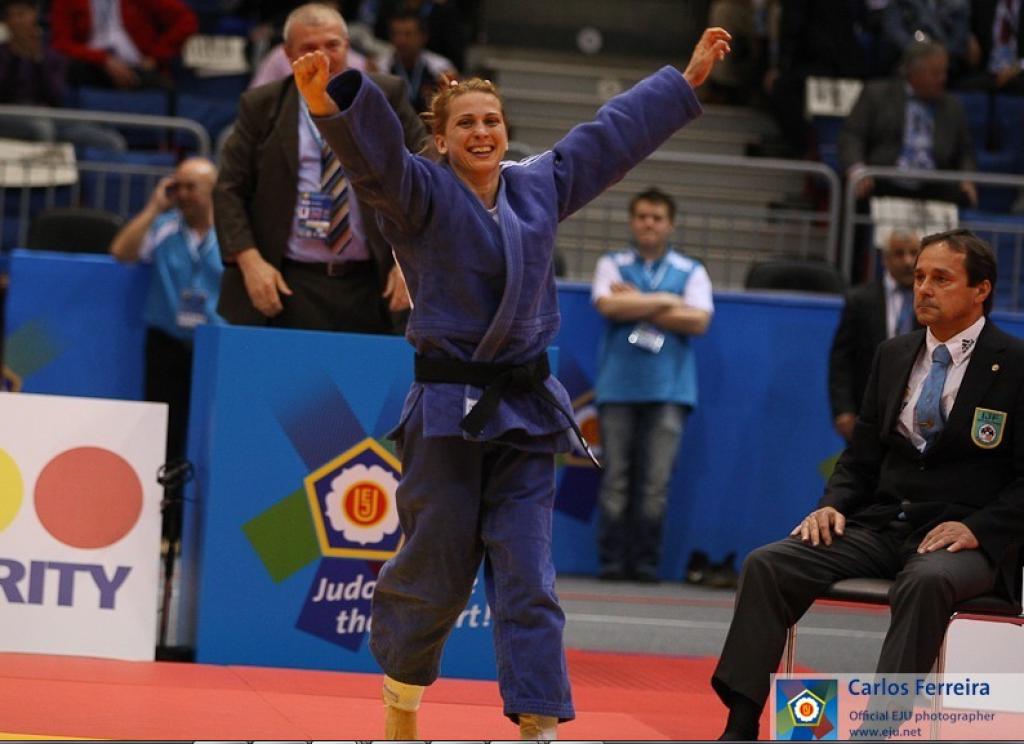 What a day it has been for Romania. A fantastic result with two gold medals for Romania starting with the category U48kg. The Ippon of Dumitru and the way she celebrated her eighth gold medal told the story.
Alina Dumitru won her eighth European title and equals the record of Edith Hrovat (AUT) who won eight titles between 1975 and 1984 in the category U48kg and U52kg. Angelique Seriese (NED) won eight titles in the plus and open category between 1988 and 1996.
In the final her opponent was Belgian Charline van Snick, her nemesis who defeated her four times and the last time at the 2011 World Championships in Paris. Van Snick was the favourite despite her seven previous titles. But Dumitru caught her in a great Ippon in the final celebrating her victory as never before.
Alina Dumitru (ROU) said: “This is my eighth title and it means a lot because this is my last European Championship. I feel great about it now. I am planning to retire after the Olympic Games.“
Dumitru defeated French Laetitia Payet in the semi final, Van Snick was victorious over Frederique Jossinet (FRA) in the semi final but was obviously upset about her final: I know that she is a tough opponent. I felt good today, very dynamic and to me it was clear what I needed to do. However, I made a technical mistake, a wrong move and it cost me a lot.“
Eva Csernoviczki (HUN) won a bronze medal in the small final against Natalia Kondratieva (RUS). Payet defeated Jossinet for bronze. Van Snick won her second European Championships medal, Payet prolonged her bronze medal of last year. „I am very emotional right now. I finally beat Jossinet, who has been in my way for so many years. It means so much to me. Now I hope that I will be selected for the Olympic Games. I should go, but I have to wait for the final decision of the French Federation.“
Eva Csernoviczki was happy in the end with a bronze medal, not losing her last match as previous three consecutive years in the final. She won her fifth medal in a row and is still a serious outsider for a good Olympic position. „At first I was not happy with my medal because I wanted more. I was very upset to looser earlier on. But now I start to feel better about the bronze medal.“