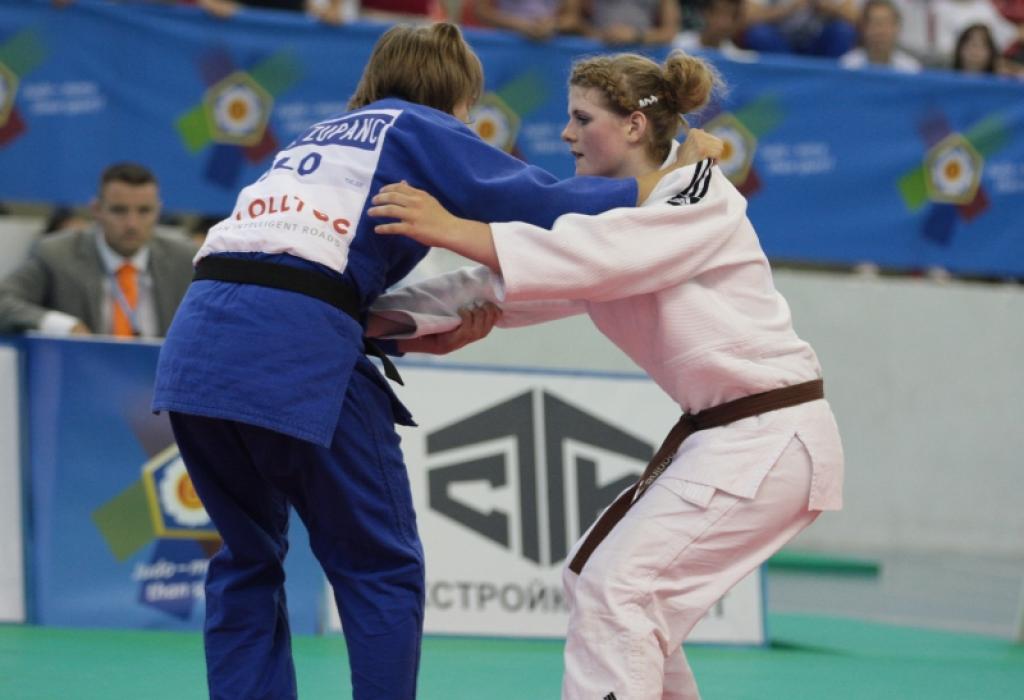 The Netherlands and the Ukraine won gold today and both added a second gold medal which listed them on the top of the medal tally of the women´s division.

Jenny Snippe was an amazing surprise by taking Holland´s second gold. Even for her coach Mark Huizinga it was an amazing surprise to finish her match against the Slovenian ne-waza expert. After Gacnik Zupanc took the lead by yuko and almost choked Snippe. But despite an ippon the TV system proved the Dutch didn´t gave up any moment. Just after the restart of the match, Snippe made an excellent uchi-mata and defeated the Slovenia by ippon. The face of Huizinga said it. all, a great surprise and after a weak start of the Dutch team, two gold medals in the women´s division brings them in the top. Her own young coach Sirach Cooiman married this weekend but got a great wedding present of his pupil Snippe.
Croatian Brigita Matic was one of the favourites in advance to win the gold. Her sister Barbara won the U63kg European title last year in Teplice. The tall Brigita Matic was surprised in the semi final by a perfect choke by Gacnik Zupanc. In the bronze medal fight of Matic against Ibolya Siroki she conceded a yuko but got back in the next minute by waza-ari. One minute before the end Matic decided the match in her advance by ippon for a powerful uchi-mata with her tall legs.
Sara Rodriguez won the first medal for Spain this event. She overcame Giorgia Stangherlin who had lost the semi final against Snippe. The Spanish scored four yuko against the Italian and finished the match by a hold down of Stangherlin. Last year Spain won silver in this category by Andrea Sebastian.

Ukraine dominates heavyweight category
The final in the women’s heavyweight category was an exciting match between Anastasiya Turchyn and the French Roudelie Caroly. The Ukrainian are exceptionally strong in this category and Turchyn defeated Turchyn by ippon in her final.
Another impressive Ukrainian was the tall Kalanina Yelyyzaveta. She defeated Kubra Kara in her bronze medal fight. The Turkish Kara had a strong pre season but could get around the Eastern European competition. Kristina Usova of Russia defeated her teammate Yulia Lyanichenko for the other bronze medal.

In the women’s division The Ukraine won one more medal than The Netherlands, but both two gold medals. Great Britain can be proud on three different medals. Russian, Romania and Bulgaria all won a gold medal.
Russia won the full medal tally of this European Cadet Championship. Last year with single participation of each country Russia won even more gold medals (5) and eleven medals in total. It says a lot about the other countries and the quality of such event where 21 different countries won medals.
Enjoy the video footage in our You Tube Channel as well as pictures and results at this website.