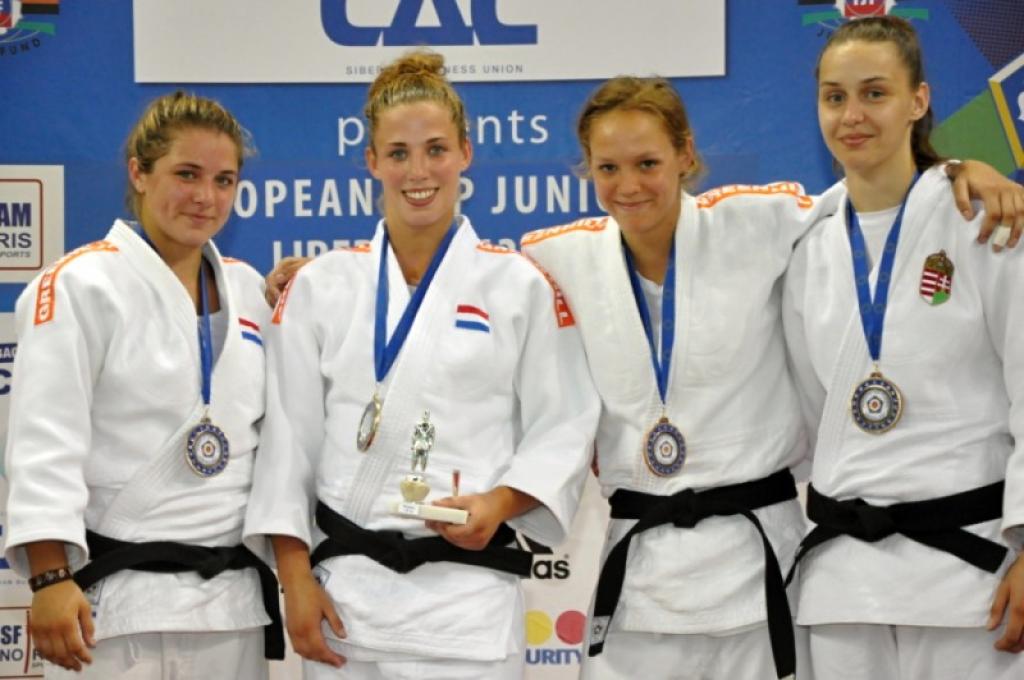 The Netherlands had a great day at the European Cup for Juniors in Liberec winning three gold medals which brought the Dutch to the first place in the medal table defeating Korea who dominated on the first day. Most of the attention for the home crown though was focused on the Czech hopes in -81 kg. In the first bronze medal fight of the day Jiri Petr took his revenge on Zuev from Russia who defeated Petr in 2010 Cadets European Championships. This time Petr threw Zuev with a superb ko-soto-gage for ippon and won the second medal for the Czech team. But the best moment for the Czech team came in -81 final. David Klammert repeated the success of Lukas Krpalek in 2008 and after 5 years won the gold for the Czech judo from the European cup held in the Czech Republic. In the final he cleverly pinned Kurzej of Poland. “I know Kurzej from the camps and believed that I could surprise him in ne-waza”, said Klammert. “I hope to please my fans also in Sarajevo”.

In -90 kg Zgank won the second gold for Slovenia. Despite of being waza-ari down in the final against Kochman of Israel he managed to trow him for ippon with a nice o soto otoshi. “O soto otoshi is my tokui-waza,” said Zgank, “and I am quite confident to throw anybody with it providing I have my grip. I will now focus on the European and World Championships. I will be going for a medal Ljubljana”.

The women categories were dominated by the Dutch team.  The first gold of the day went to Holland. Karen Stevenson threw Urska Gracner Slovenia with a nice Harai goshi for waza-ari and she finished the match with Kesa gatame. “The quarterfinal against Soares of Brazil was  quite hard, but I am satisfied with my performance”, said Stevenson after the final. “I hope to repeat it in Sarajevo”.

The second gold for Holland was added by Iris Iwema  who defeated her compatriot Sharon de Gans in the final. Caroline De Wit in -70 kg was close to add another gold for Holland in -70 kg but she was defeated by Barbara Matic of Croatia. Nevertheless the third gold for Netherland was won by Sjoerd van Mierlo in -100 kg who defeated Adilkhan Kozybayev of Kazakhstan by penalties.

Emese Karpati of Hungary won the gold in +78 kg however her opponent Kalanina of Ukraine did not fight because of the injury.

The last gold went to Uzbekistan. In the +100 final Masharipov pinned Rudnyk of Ukraine after throwing him for waza-ari. The Czech team won another bronze in this category when Jan Stanek threw Yergaliev with a superb soto-maki-komi.

Tomorrow the Junior Training Camp begins and will be attended by approximately 300 young athletes.