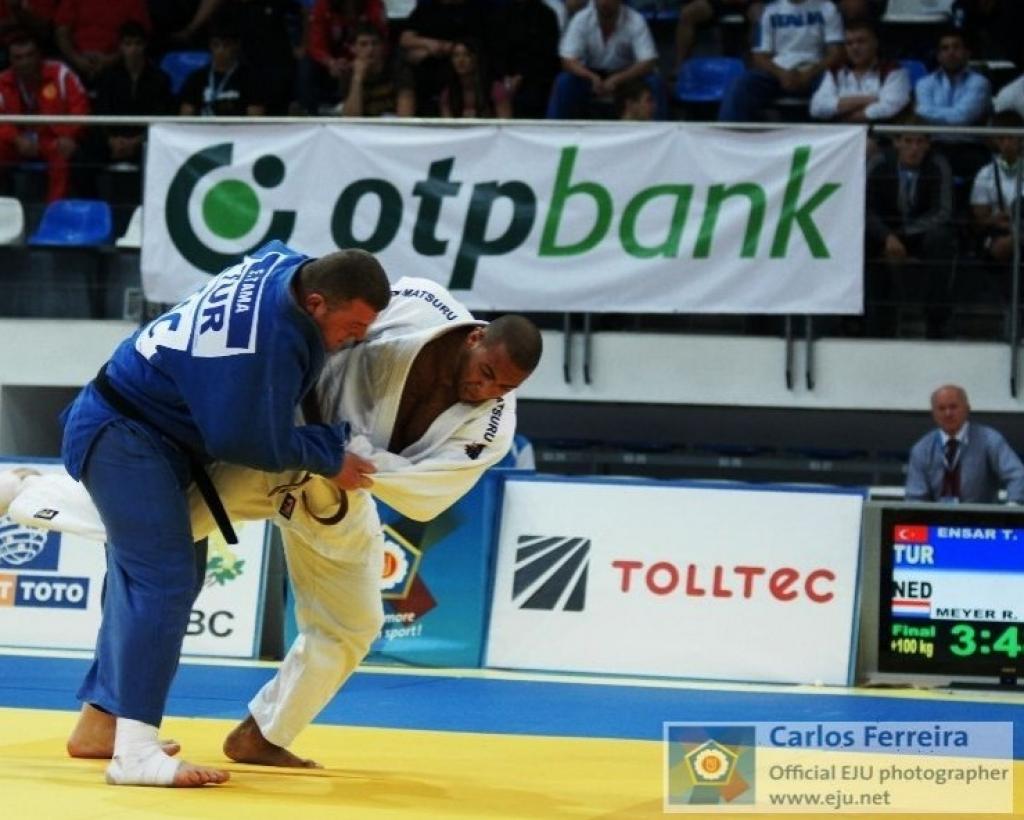 At the last day of the European U20 Championships The Netherlands took two titles and finished second in the medal tally behind Russia, both winning three categories in total.

The Dutch collected both titles in the heavy weight categories. Roy Meijer defeated Tama Ensar (TUR) in the final. Meijer who is in competition with his dutch rival Pascal Scherrenberg is not selected for the Junior World Championships in October in Agadir (MOR), but was able to make his point here in Samokov winning the gold. Scherrenberg defeated Meijer at the European Cup in Cetniewo. Turkish Champion Ensar who had won the European u20 Cup in Tartu in April lost this final by ippon.

Another Dutch gold medal was for Janine Penders, quite a surprise. The more expected German Kristin Büssow finished third today as she lost to finallist Maryna Slutskaya (BLR). Penders was able to beat Slutskaya by ippon. Last year Penders finished with bronze.
The Dutch compensated last year’s clean sheet with the three gold medals of this weekend.

Host nation Bulgaria finally celebrated a gold medal at the junior Europeans. In 1981 it was the last time that Bulgaria collected a European title. Atanas Valchev won U86kg, today it was Tereza Dzhurova who could deal with the expectations. This year she already won the European Cup in Leibnitz and was definitely one of the favourites for this weekend. 18-Year old Dzhurova won the final of Dutch Guusje Steenhuis in the golden score in a close match.

Russian Magomed Magomedov, the youngest of the three existing judoka with the same name, won the U90kg weight class. He showed great judo today and was able to overcome Giorgi Nozadze (GEO) in this tough category. Magomedov defeated last year’s runner up Grigori Minaskhkin in the semi final in an exhausting match. Minashkin won the bronze. Minashkin lost the final of last year against Marcus Nyman who won the European senior title this year in Vienna, telling us what the level is of this championship.

German Karl-Richard Frey wins almost everything possible. Today he could beat all of his rivals in Samokov. Not a surprise as he had won European junior Cups this year in Coimbra, Kaunas, Lyon and Prague, and lost the final in Berlin in August against Japanese Ryunosuke Haga. Today he defeated Shamil Magomedov (RUS). Home favourite Daniel Dichev who also made a strong impression this year finished third.