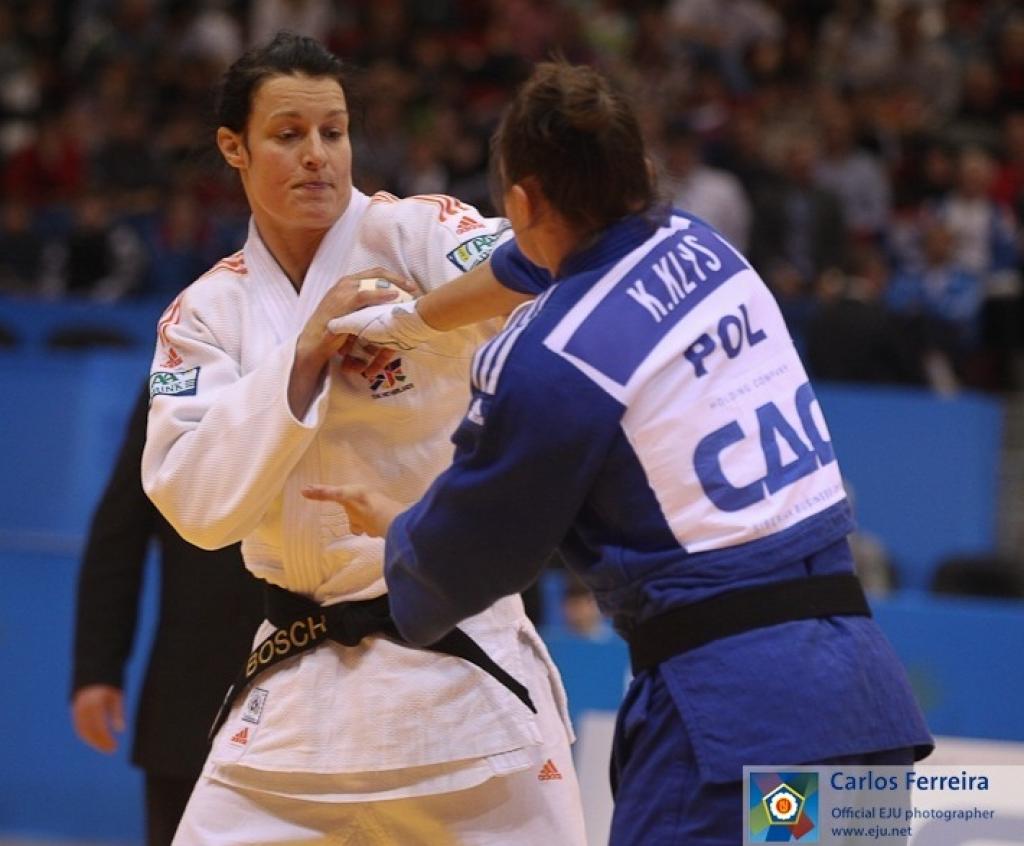 Dutch Edith Bosch won her fourth European Championships title on Friday in Chelyabinsk. The tall Dutch defeated Katarzyna Klys of Poland in the final U70kg. Bosch who debuted in 2000 in Wroclaw has now won her seventh medal in the U70kg category and is the most successful woman since the category changed from U66kg to U70kg in 1998. She enters the top 25 of most successful European of all time in judo.

Klys lost her second European final. In 2007 she won a silver medal against Gevrise Emane (FRA) who won her fourth European title just like Bosch.

In all honesty the Championship was not the opposition expected at the Olympic Games. Bosch could rather easily hold off her opponents Gemma Gibbons (GBR), Erica Barbieri (ITA) and Juliane Robra (SUI). However being ill for some time and not fit for the whole year it made her a bit nervous for the final to defend her title. She didn’t want to take too much risk against Katarzyna Klys who she had beaten twice before. A tactical match by Bosch who paid learning money in previous major finals no being strategical as today at the age of 31.

Bosch: “This is my fourth European title and it is always special to win. The final was tough. Everyone has a chance. I was nervous, because I really wanted this title. I didn’t take a risk. It wasn’t pretty but it counts. Winning is always exciting. A judo a career isn’t going always upwards, there are ups and downs. I was out for a long time as I was sick. Today is a good starting point.“

Klys defeated three opponents today starting with Ozge Akarsu (TUR) followed by Sally Conway and a good and important victory over Rasa Sraka (SLO) who beat her four times before. Klys was pleased though with her performance: “I am very happy with this medal. I won a silver in 2007 and now to repeat this result is a big joy for me.“
Sraka however won the bronze medal fight against Erica Barbieri.

Although the competition may have looked less strong then last year including world champion Lucie Decosse (FRA( and Annett Meszaros (HUN), still some serious outsiders were defeated in an early stage such as Marie Pasquet (FRA), Bernadette Graf (AUT), Iljana Marzok (GER), Cecilia Blanco (ESP) and another Dutch Linda Bolder in the bronze medal fight. So the last bronze medal was for Juliane Robra who won another bronze medal like in 2010.
Robra mentioned: “I am glad that I was able to win this last fight. I was disappointed about losing in the semifinal, but I am happy that I was able to refocus for the bronze medal match and beat Linda Bolder. I know her very well as most of my opponents. It was a good experience for me and I’ll continue to work.“