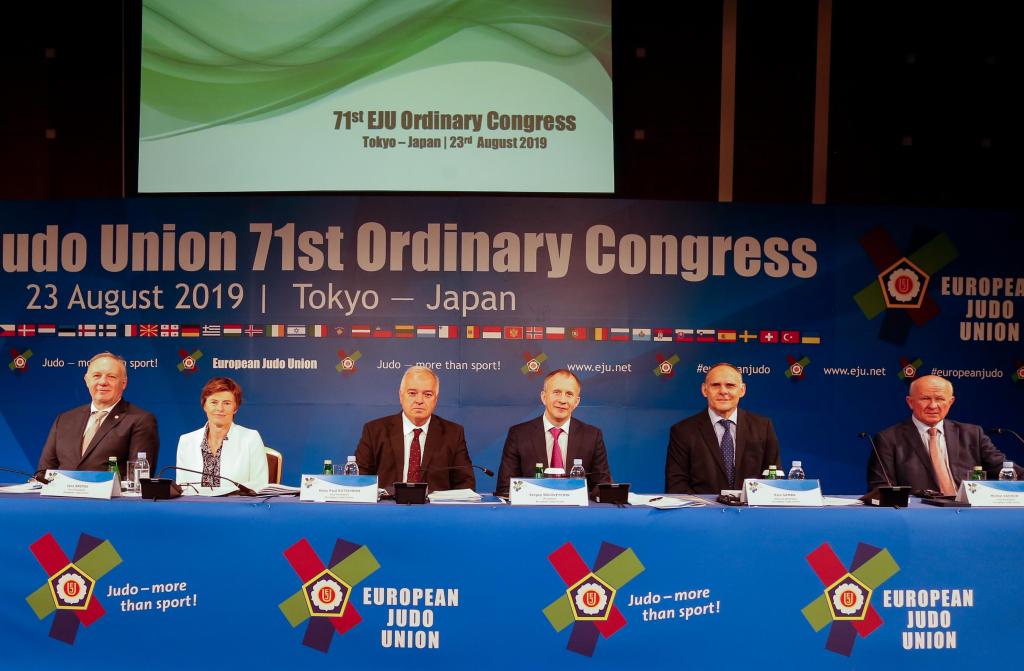 With 44 countries in attendance, the 71st European Judo Union Ordinary Congress took place in the Tokyo Dome Hotel just ahead of the commencement of the World Judo Championships 2019.

President of the EJU, Mr Sergey Soloveychik began by introducing speakers, special guests and EJU honorary members before lastly regarding President of the Japanese Olympic Committee, among many other accolades, Mr Yamashita Yasuhiro.

Mr Soloveychik congratulated Mr Yamashita on his new appointment in the JOC and thanked him not only for the perfectly organised and executed IJF Congress yesterday but for the financial support in order to make this EJU Congress possible as well. Mr Yamashita was then gifted by the  EJU president and gave a speech,

Dear judo family of Europe, it is a great honour to welcome you here, many parts of our tour are initiated from Europe and I hope you are satisfied by our arrangement and with this Congress. I hope you and your athletes are ready for competition, and I look forward for your cooperation in years to come.

General Secretary of the EJU, Mr Ezio Gamba continued on to host the remainder of the Congress and presented each speaker, first up was General Treasurer, Dr Toth Lázló.

Mr Toth was able to inform the national federations that due to an increase in revenue, the EJU were able to invest 30% more capital in sports, education, marketing and the development of sport in 2018 than 2017. Along with organisational licensing, the participation fees from European Cups, Opens, camps as well as the European Championships all contributed to an incredible revenue boost. Toth made special mention to the ability of the EJU’s ability to contribute more of the expenditure to education, noting various aspects including the Judo Festival, Judo for Schools and Judo for Police.

Mr Soloveychik made a point that this increased success is,

due to the cooperation and hard work of the national federations, the development of judo on the international stage as well as the recognition of our champions and judo personalities. I would like to thank you all and Mr Yamashita once again, we are very happy with our executive team, commissioners, as well as technical. It is a very strong team and though we are proving our success, many things can be done to make us better.

He continued to thank the national federations that have hosted international events, both IJF and EJU and special thanks in advance to Czech Republic and Portugal in the matter of hosting the European Championships in 2020 and 2021 respectively. The work the federations commit to is imperative for the EJU to collaborate with governing bodies.

The focus of Mr Soloveychik for the future of EJU is to focus on the Olympic preparation for our athletes and to work closely with the national federations in order to realise their ideas, bringing social projects to life, bringing the philosophy and judo ideas to the wider population and society.

Closing his presidential speech, he wished the athletes of this World Championships the best of luck and hope for great success.

Vice President, Mr Michal Vachun covered sporting matters, reflecting on major tournaments, including the Champions and Europa League in Bucharest, as this was the first time both o of the events were held in the same place. Also discussed was the European Games in Minsk, the successes of the organising committee but also the options for improvement moving forward for the next European Games which will be held in Krakow, 2023.

Both the Senior and Cadet European Championships were looked back upon prior to showcasing the host cities for 2020 which will be Prague, Czech Republic, for the senior athletes and Riga, Latvia, for the cadets.

It was noted that there has been an increase in participation across the board in all age categories as well as a spike in training camps which can be explained by the Olympic preparation cycle.

Inclusion is increasingly important for all athletes and the importance put on all categories is essential, Mr Vachun spoke about the high level of European talent currently competing on the IJF Tour,

These World Championships will be the ultimate test for Tokyo 2020 and we have great hopes for our athletes as we have WRL #1 in all but three of the fourteen weight categories, as well as France and Russia holding the #2 and #3 positions in the Mixed Teams ranking.

Mr Vachun commended the national federations and our president for the improved strategies in our sport and union, supporting the new projects and developments.

With such a large focus on our Education department, Vice President Ms Jane Bridge spoke of how much her department and colleagues have managed to develop but also, with encouraging words, painted a picture of the future that the national federations could help to build.

Starting with Kata, Bridge explained the European Championships had fulfilled their aims, both to increase participation – an astounding 138 pairs performed – and decrease the average age of the judoka by introducing younger age categories which now start from 14 year of age. For those that don’t necessarily want to compete in mainstream judo, this is proving to be a great alternative in all age groups. In the Canary Islands the EJU also managed to test technical scoring which was successful and hosted a special needs kata demonstration.

In the future, the objective is to increase the number of judges in the five different kata and reached out to the national federations for their assistance in this area. Also, the aim is to continue with the younger are groups as well as special needs demonstrations. Impressively the World Championships, which will be a part of the World Martial Arts Games, has a total of 41 European pairs out of 80 competing in September.

The main events for kata in 2020 will of course be the European Championships in Warsaw, Poland along with three kata tournaments in Belgium, Italy and France. Aside from the competitive aspect, the Judo Festival will continue to host the Kodokan Seminar and following the success of the seminar at the end of this years kata European Championships, another will be added in 2020 with the EJU Expert Commission.

The Veteran European Championships was also held in the Canary Islands, with the 2020 edition in Chania, Crete between the 21st and 24th of May. Inclusion continues to be a major theme in the EJU objectives and this is no different.

The flagship event for education is the Judo Festival held in Porec, dates have been decided for 2020 and will be between the 8th and 16th June 2020. This year hosted the first Special Needs Seminar and with great success plan on implementing this in the future. The EJU are working on increasing seminars across Europe in order to create a legacy for society and inclusion.

Relationships are constantly being built, whether it is with the USPE, who have now invited the EJU to present in their sporting conference, or Safe Fall, the scientific commission who work to show WHO that learning to fall in judo can decrease the risk of injury and even deaths. EJU will also be at the EuroSafe congress in October to present their ideas.

Major collaborations have been formed in national federations which is being recognised with Judo in School, it is a great opportunity to increase judo and the marketing in each country using this environment, most recently on board with this project is Luxembourg.

A relatively new concept is ‘Improve with a Champion’ and has already been trialed with the likes of Giuseppe Maddaloni, these sessions are to be tailored for the individual or small groups. It is another way to improve an individuals technique or fighting style with an experienced athlete.

With many avenues of education, it was noted that the IJF App offers 171 videos free of charge relating to coaching children between 8 and 12 years old. This includes tachi waza, ne waza and complex sets of techniques made for judo club coaches.

the future ambitions are for kata to continue to flourish among the younger generations, for the veterans to endeavour to stay in contact and keep this community alive. Judo should be present in all walks of life, judo is more than sport.

Vice President Dr Hans Paul Kutschera discussed marketing matters and stated that based on our judo values we can concentrate on making a clear difference between judo and other combat sports, in a bid to increase popularity in the sport.

A main area of the presentation was based on the possibilities of live streaming, which is consistently strong and becoming better, but one aim would be to increase the availability in European Cups. Another suggestion was to alter the format of the live screen visual, having the ability to see the commentators, if there are special guests such as athletes or coaches. Though this is already something that the EJU acts upon, this would give the viewers an opportunity to put a face to the voice.

There has been a consistently growing following on all social media platforms, specifically on Instagram, though Facebook is still the larger audience and doesn’t appear affected by any generational bias. Mr Kutschera showcased the new website including the mobile development, the easier access to news, live stream and facts such as top European athletes.

Using successful editions as examples including Ekaterinburg 2018 and Minsk 2019, there would be a push for involvement in the EJU Family Fan Camp and Spectator Programme. These events include masterclasses and activities for the whole family as well as special guests including Georgii Zantaraia.

With the publication of Daria Bilodid’s ‘Meet The Champions’ project today, this was also highlighted as a way our media can help the spectators access their judo heroes, giving the athletes personal profiles with the aim of looking behind the scenes to see what it takes to make a Champion. This is believed to be encouraging for the younger generations.

The next Congress will take place in Istanbul, Turkey.