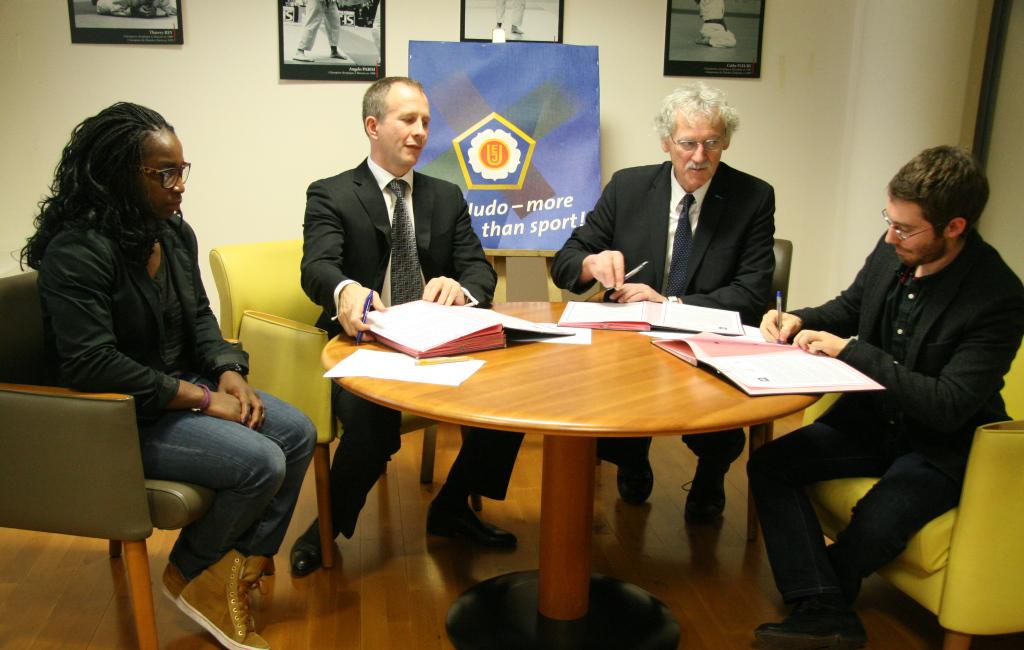 The European Judo Union (EJU), French Judo Federation (FFJDA) and Sport Sans Frontières, have signed an memorandum of cooperation in Paris during a conference in the occasion of the European Championships for Clubs.

The memorandum of cooperation was signed by EJU President Sergey Soloveychik who stated the importancy of the social values of judo. French Judo Federation President Jean-Luc Rougé has a long time cooperation with the government where judo is one of the tools to reintegrate people into society. Sport sans Frontières Executive Director David Blough was very happy to add the EJU to his portfolio of organisation that support his goal. Rougé joked but a serious undertone: “Congratulations as with this cooperation you have 50 countries cooperating, the EJU represents 50 countries.” Sport Sans Frontières (Sports without borders), believes in the powerful role of sport as a tool for education and social transformation. In many parts of the world, millions of children and youth lack access to sports, physical activity and play, which is essential to their physical, mental and social development. Sport Sans Frontières actively defends this fundamental right by promoting sport and play as a tool to educate, integrate and empower marginalized and traumatized young people throughout the world. Since 1999, Sport Sans Frontières has created and managed sport for change programs in 12 different countries, impacting the lives of over half a million children and has helped 50,000 young children. Sport sans Frontières has developed and handled support programs through Games and Sports worldwide since 1999. The association uses Sport and Games as tool of awareness, prevention and education towards people and especially for vulnerable children. Sport Sans Frontières has taken action within 12 countries by providing innovative means of awareness about health issues (malaria, HIV, ect) or well-being together (Fight against discrimination, resolution of the conflicts, etc) or environment to the local stakeholders since its inception. The French Judo Federation (hereinafter – FFJDA) conducts for more than ten years a structured policy in favor of the public with social difficulties. The educational, social and professional integration policy “100 Ceintures Noires “, through the Judo practice, encourages the French Judo Federation to accompany clubs and committees which want to set up actions in favor of the people in difficulty through: – Clubs access ; – Citizen education and social integration ; – Professional integration. The signing was accompanied by double World Champion Gevrise Emane. She was World and Europe Team Champion and at the European Championships for Clubs, she underlined the value of individual judoka in a team. Team championships are an important social aspect of judo as well.