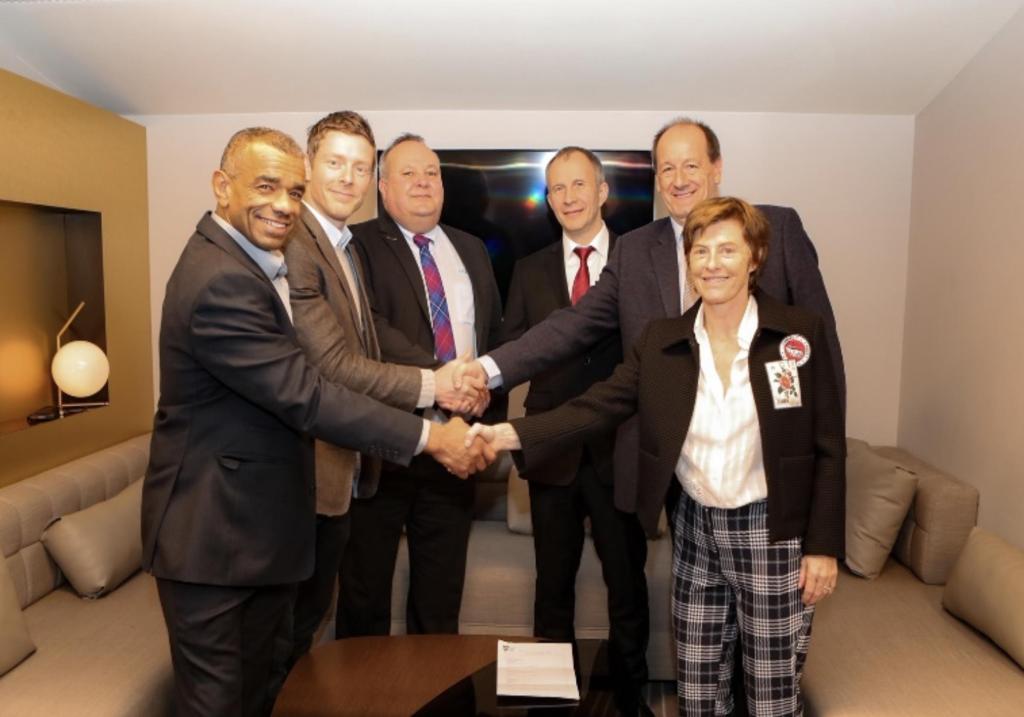 In a ceremony held at the Paris Grand Slam earlier this year, a Memorandum of Understanding between Harrow School in Great Britain, the British Judo Association and the European Judo Union was signed in support of the EJU ‘Judo at School’ initiative. As stated by EJU President, Mr Sergey Soloveychik,

the aim of the Judo at School project is for judo to become part of the physical education programme in all European schools.  The essential judo values, and fundamental skills such as ukemi (the ability to fall), are of use in other sports disciplines and in daily life.

The partnership was steered by Jane Bridge, EJU Vice President for Education.

The core aims of the Judo at School project are already in place at Harrow School”, explains Bridge. “They have had obvious success competitively, as winners of the British Schools Championships, and I have also had the pleasure of seeing their programme develop more recently to include Judo on the Physical Education curriculum for all pupils. It is now hoped that, with EJU recognition and support, ‘Judo at Harrow’ can be further developed, and their example modelled by other schools in the UK.

In charge of ‘Judo at Harrow’ is Matthew Glossop, a teacher of Physics and a 4th Dan in Judo.  Glossop explained,

while there has been a Judo Club at Harrow since the 1970s, we have really raised the profile of the sport in recent years, and Judo became part of our PE curriculum in 2017. This means that all boys at Harrow have several judo lessons throughout their first year at the school. These introductory lessons focus on falling techniques and the fundamentals of posture, balance and balance breaking, which are highly transferable physical skills. Pupils are also introduced to the unique etiquette of our sport as well as the Japanese language.

Paul Ajala, a former British Champion who has led the coaching team at Harrow for 20 years adds,

Harrow is in a very fortunate position at present, with staff members experienced in Judo and a school management that recognises the wider benefits of our sport. This year for example, we have developed an important partnership with rugby, helping the school’s younger rugby players minimise the risks of injury through falling and collision. In turn, some talented athletes have developed an interest in judo and have been part of our Championship winning teams.

There are now over 40 boys training in judo regularly in this club. In Harrow’s full-boarding environment, pupils cannot access local judo clubs easily. The twice weekly training sessions are supported by a programme of master classes delivered by World-class coaches and judo training camps which are offered as school trips. In July this year, they will embark on their third tour of Japan, which includes judo and a cultural exchange with several high schools and universities across Japan and, of course, a visit to the Kodokan. Harrow welcomes the support of the EJU as they look to improve their judo programme further, Glossop positively adds,

We are excited to work with the EJU to promote ‘Judo at School’ and provide an example and support to other schools in the UK.

Alongside Soloveychik, Bridge, Glossop and Ajala, British Judo Association representatives, Chief Executive Andrew Scoular and Chairman Ronnie Saez were present at the signing of the Memorandum of Understanding in Paris. Saez was pleased with the extension of the EJU relationship,

The British Judo Association has been very impressed by the Judo development programme designed and implemented by Harrow School and view the signing of this MOU as a massive step forward in extending our existing partnership.