EJU and Malta proud at organisation of European Cadet Championships 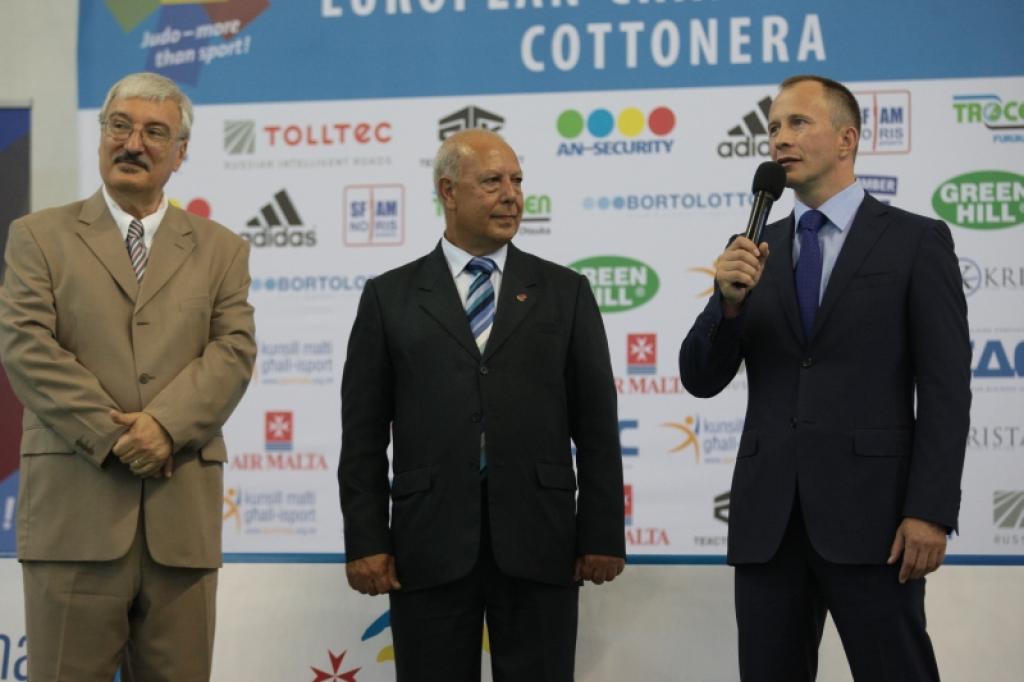 Today was the opening day of the European U17 Championships in Cottonera in Malta. Approximately 100 Young judoka gave a nice show of their skills representing as well 37 competing nations. European Judo Union President Sergey Soloveychik was present for the opening ceremony and enjoyed the difference of various winning nations.
He opened the European Championships accompanied by Envic Galea of the President Malta Judo Federation and Joe Cassar, General Secretary of the Maltese Olympic Committee.

President Sergey Soloveychik was happy to have a Championship again in Malta.
Soloveychik: `We are satisfied that not only bigger organisations but also smaller organisations are able to organise championships like these. It shows the development of the EJU and its federations. Malta organises a good level. Despite all difficulties that Federations have one year before the Olympic Games. A lot of the money flows into the ultimate performances to qualify for the Olympic Games in London and to perform at the Olympic Games. Here we see promising talents and I hope they will bring us good European results in the future at international events. This generation may be able to shine at the Olympic of 2016 in Rio de Janeiro.´

At this Championship countries could enter with double teams for the first time in this age category U17 years. Soloveychik: ‘We follow the line of the IJF, a clear choice and I see positive developments. If you look at the women’s category fourteen countries have won a medal after two days of fighting, that’s a good distribution. We should give the opportunity to the federations to enter the competitions with more than one judoka. Some countries want more judoka in some categories and we open the doors. It is not so easy, not for small federations, but also not for the bigger federations who make more expenses to send more judoka. The number of medals to win remain the same but the quality is definitely higher.’

For the Maltese Olympic Committee judo is an important sport. General Secretary Joe Cassar says:
‘Judo was the sport with the most medals in the small state championships. Now it may be Athletics, but that has by far more medal events. So judo takes an important place and Envic Galea and his daughter, and obviously the whole organisation with all volunteers can bring the extra that a federation needs to organise such championship.’
Cassar: ‘ For the youth such an event is also important, we saw many young children at the opening ceremony at in judo they are taught disciplines and gain self confidence to develop who they will become later. Judo is a very educational sport and we are happy to create the environment where they can see other young people at such a high level. The athletes are enjoying the games, enjoy the atmosphere here in Malta and I hope they enjoy a little of the beauty of the island.’

EJU President Soloveychik added: ‘The temperature was very hot for everybody, but we all have the same conditions. But we are samurais!’