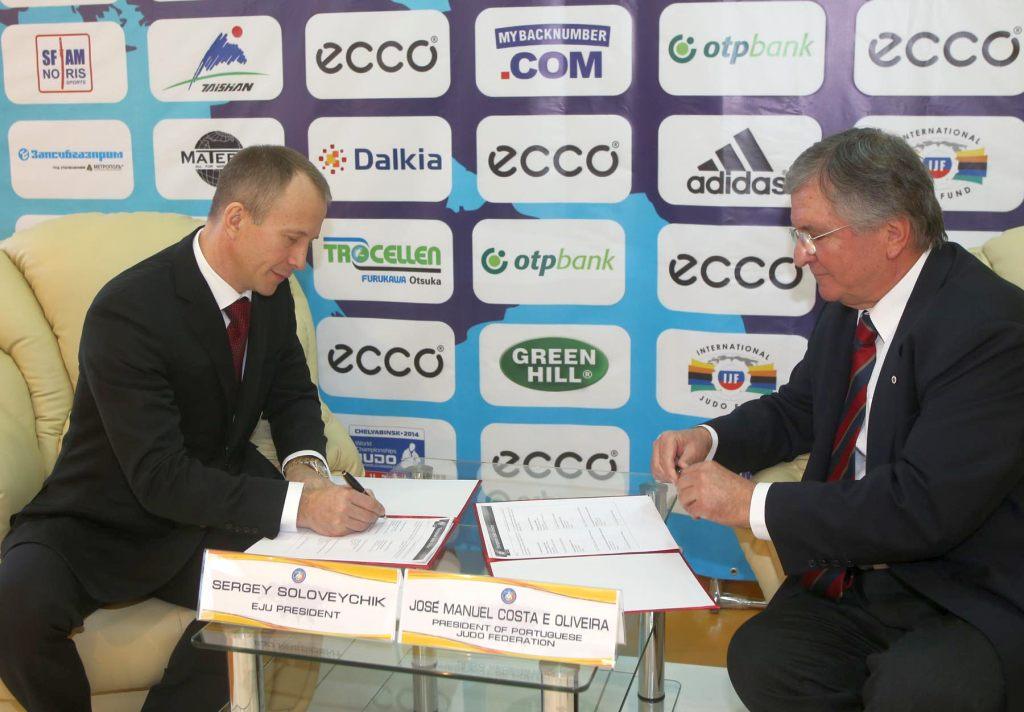 The EJU and Portuguese Judo Federation have signed an memorandum of Understanding (MOU) for the Judo at School Project in Portugal.

The EJU cherishes schooljudo a lot and is rolling out a project signing agreements with many national judo federation. In Portugal Judo at School is not new, the Federation is very active for years using judo as a tool to activate children, but also integrating other age categories or people in trouble to participate into the society via judo. The Judo at School project based upon the signed MOU will start in February in Portugal. During a signing ceremony and media gathering both presidents underlines the importance of judo at school. FPJ President José Manuel Álvares da Costa e Oliveira said: “The project will be launched in elementary classes in seven schools in different regions of Portugal. There are 10 million people in Portugal, 13,000 of them practise judo. The Portuguese Judo Federation joins this creative project with great pleasure and honour, and they are sure that thanks to such programme they would extend the level of judo development.” The Portuguese Judo Federation is happy with its promoters of judo such as Nuno Delgado, the 2000 Olympic Games medallist and Telma Monteiro, four times European Champion and triple vice World Champion who was selected to fight for the European team in Tyumen. Both athletes played an outstanding role in the development of Portuguese judo and are true heroes for the new generation. EJU President Sergey Soloveychik mentioned: “The EJU has initiated several projects focused upon different target groups, covering all age groups. In particular we have projects such as our successful Olympic Training Centres, The project “Improve Your Club” where clubs can invite our EJU experts for seminars and the most important programme so far is the achieve Judo Lessons at School. The maximum target of Judo for School is in two years’ time to have judo officially recognised as a part of the school curriculum, a part of the PhE education programme in European schools.” Soloveychik: “The essential judo values and elements that are taught during this experimental programme such as ukemi, or ability to fall, can be used in other sports disciplines and in daily life.” Watch the photos of the signing and presentation in the judo at school website: http://www.eju.net/state/?mode=showMemberState&id=por