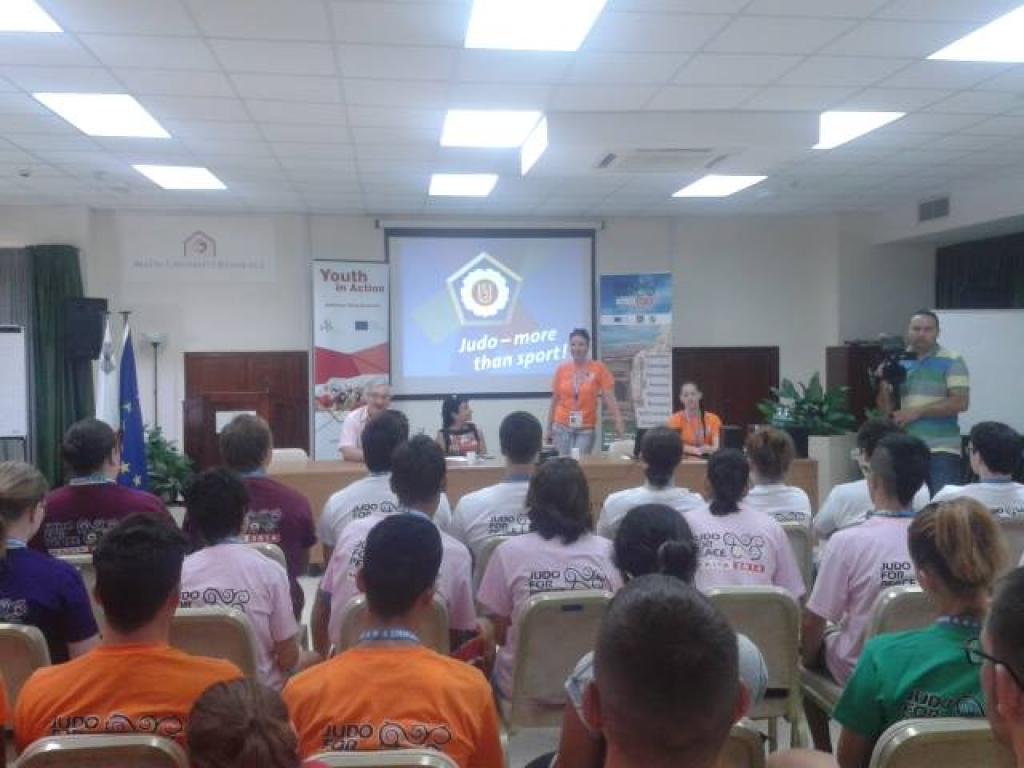 The Judo for Peace project was officially launched on Tuesday. Mr. Envic Galea, the CEO of the Malta Judo Foundation during the launching of the project highlighted that Judo is not only a sport but a way of life. In view of this the Malta Judo Foundation invested in this project so that through the process of non formal education and active participation judokas are getting the opportunity to practice the judo moral code within the different social contexts. Through this process young people participating in this project are getting hands on experience and shall be engaging in a process of learning by doing. This project shall trigger further educational initiatives in different countries following the networking process which is aimed to be carried out throughout the programme.

After the opening ceremony, the participants went back to their groups at the seminar, and discussed the Judo Moral Code. Out of the 8 fundamentals, mainly Courtesy, Courage, Sincerity, Honour, Modesty, Respect, Self Control and Friendship, the participants had to select their top 3. All teams chose Respect as one of their top 3, and it was highlighted as one of the building blocks of judo. Judo is a combat sport, but still, the judoka have to be respectful to one another, and take care of each other. In this project, respect is important as there are various cultures and nationalities. Respect is also about being able to do judo with people with disability. 7 out of the 8 teams chose Friendship as one of their top 3. Judo is an individual sport, and on the mat, judoka are usually opponents. However judoka are constantly making friends on the mat and off the mat though judo. Wherever in the world, one just needs to walk in a judo club with a judogi to make friends. 6 teams chose Courage as one of their top elements. Judo is a fighting sport, and definitely one needs courage to get on the mat. One might not win all the time, but the courage is needed to go back to the mat. Other fundamentals which were selected were Control of oneself, Politeness, that is how to behave within the group, and Modesty.

In the afternoon, the participants of Judo for Peace discussed how judo and sport can change lives within their groups. Some of the examples included how judo helped people to give up drugs, alcohol, and eating disorders. Judo does not only make you stronger and get you more friends, but it also makes people sure of oneself. Discipline and self control are very important in Judo, not just on the mat, but in life in general. It not only changes lives, but it also helps one overcome a bad day, but it also gives the energy to overcome a difficult day.

One of the participants gave her experience, when due to a physical condition she could not continue training, though through judo she could still remain involved as a coach, as a competition official, and can still be appreciated as a judoka. Another group said that in Judo, they can be themselves. Judo embraces all religions and cultures and it helps you to know the limits of your body, and gives you something to strive for.
The Judoka also had a judo session lead by Joe Wathan from Great Britain, and a Ju-No Kata Session, lead by Monica Piredda and Kristina Pekkola.

What the leaders observed is that the participants are socialising much more between the countries and removing any barriers, such as cultural and language.

About Judo for peace:

The European Judo Union (EJU), in collaboration with the Malta Judo Foundation (MJF), was successful in winning a Youth in Action project. This is a programme the European Union has set up for young people to inspire a sense of active European citizenship, solidarity and tolerance among young Europeans and to involve them in shaping the Union’s future. It also promotes mobility within and beyond the EU’s borders, non-formal learning and intercultural dialogue, and encourages the employability and inclusion of all young people, regardless of their educational, social and cultural background.

Judo is not just a sport, but a philosophy, an education system, a way of life and much more. Judo for Peace is a Youth in Action project to promote social inclusion and diversity. Judo has been used several times as a tool leading to peace. The Judo for Peace project will deal with a number of discussions incorporating personal and social development; conflict resolution; human rights and volunteering activities with young women, children with special needs as well as migrant children. This project will run on 10 days and will bring together youth from different European Countries. 62 Judoka and 11 Team Leaders from 10 countries, Belgium, Belarus, Finland, Germany, Great Britain, Hungary, Malta, Italy, Sweden and Ukraine flew to Malta to start the first EU funded project between the MJF and the EJU at the University Residence in Hal Lija.

Further information on this project may be obtained from the Judo for Peace facebook page: https://www.facebook.com/judoforpeacmalta