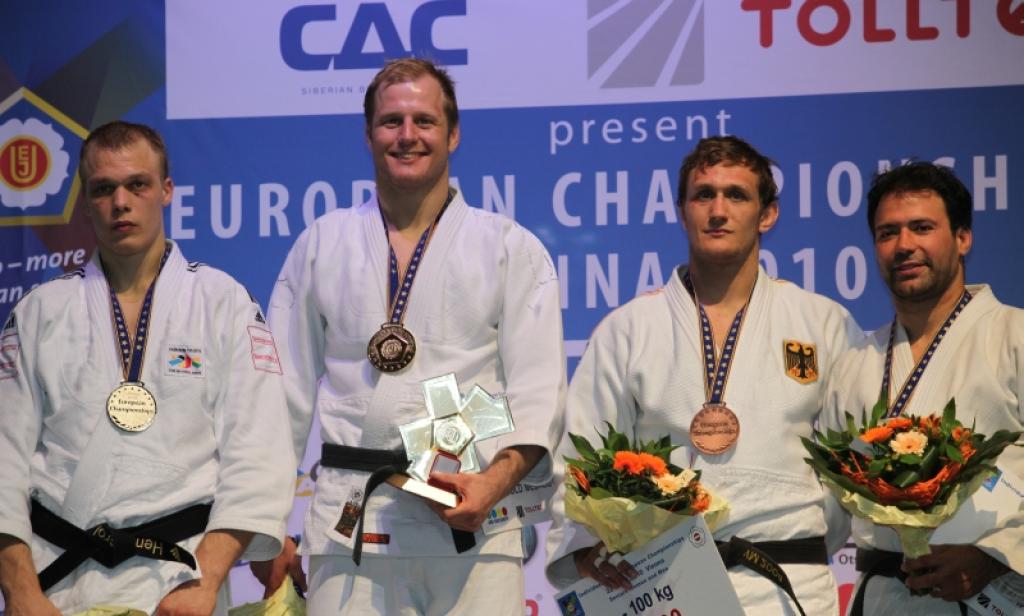 Elco van der Geest (BEL) collected his second European title. He won the title in 2002 for The Netherlands but last year one day before the Worlds in Rotterdam his Belgian citizenship was ready. In the final he defeated Henk Grol by decision. Grol is his former competitor at his own club. Grol, the vice world champion, wasn’t in his optimal shape due to a back injury today.
Van der Geest led the match until 18 seconds for the end in a close match. Grol was penalized but scored a yuko and was back in the match and couldn’t get to his Olympic level of 2008 when he won the bronze,

Grol was European Champion in 2008, and vice champion last year. Van der Geest won the Tournoi de Paris and is reborn since last year. Since than he is ‘injury free’ after a long struggle in his life with injuries. One of his major rivals Ariel Zeevi who won the bronze today, defeated him many times, but today Van der Geest beat him this time making 7-2 for Zeevi in major confrontations. But the last two wins were both for the younger brother of former world champion Dennis van der Geest.

Elco van der Geest took the medal by a unanimous decision of 3-0 by the referees. Although this match had two winners, but didn’t deserve anyone to lose.

The bronze was for 33-year old Ariel Zeevi who became the oldest medal winner of this championship, two months older than Ilse Heylen on Thursday.
The second bronze medal went to Benjamin Behrla who lost to Henk Grol in the semi final in a good match by the German but he came back defeating Yauhen Biadulin of Belarus.