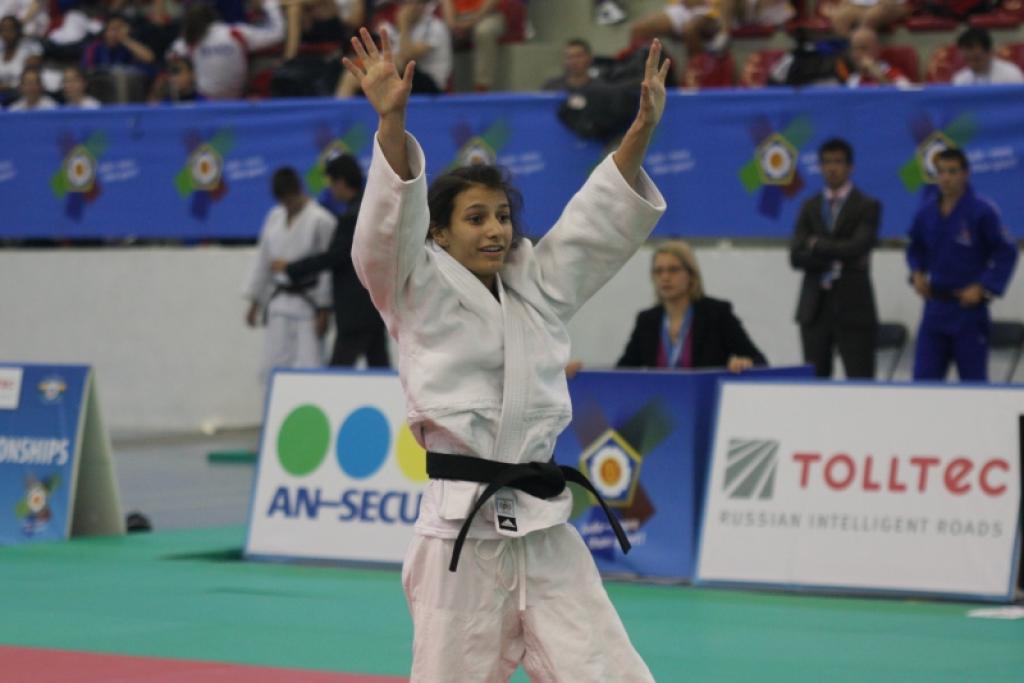 The first big success was for Bulgaria. This time she won the gold medal, Borislava Damyanova won the gold at the European U17 Championships in Cottonera in Malta. In her class U40kg she defeated Philine Falk of Germany. Last year Damyanova finished second in Teplice. This time she needed 2.5 minutes to win by two waza-ari.
Damyanova was more active in the match and dominated her category the whole day. She defeated Rut Barna of Romania in the semi final who won the bronze against Fatma Gulsoy (TUR) who was ranked first before this championship.
Evelyne Audiens won bronze on behalf of Belgium when she defeated Marion Huber of Italy who stranded in the semi final against Falk.
Last year Ivaylo Ivanov won gold for Bulgaria in Teplie, In Cottonera the golden success was continued by Damyanova.

Russia recaptures title U44kg
In the category U44kg Irina Dolgova won the gold medal against Sara Maria Romano of Italy. Brown belt Dolgova was amazingly strong today. Dolgova had beaten Hayley Willis and Evi Vermandere, two strong European youngsters in this category who later took bronze. Dolgova wanted Romano on the ground and defeat her with her strong grip but Romano remained cool and was able to show some good attempts to benefit of the fast moving Russian. Today ‘s final was typical for the day, fast and exciting matches but not many ippon scores. The match remained thrilling until the end and no one was able to score in regular time. Despite her age of 15 she is already Russian Champion U17 and U20 years.
Dolgova scored after one minute in the golden score, the only serious chance to break through the strong defence of Romano. Italy was not able to continue last year’s gold of Angelina Bombara, this time Russia takes back the title of 2009 of Evgenia Demintseva.
Belgian Evi Vermandere lost the bronze medal yesterday because she was the best judoka to lose a match yesterday in the women´s event. Nazlican Kilic was more efficient in her match. She was seeded as Europe’s number one in the cadet ranking.
Great Britain’s Hayley Willis won bronze in her fight against Stephanie Gerno of France.

Olga Smolska wins European title U48kg
Number one seeded Ukrainian Olga Smolska needed three minutes to defeat Amandine Buchard of France. Smolska won four matches today and defeated both bronze medalists. After a tactical start Smolska took over Buchard and could finish the match by oseikomi. Smolska was too strong for everybody and is the successor of double Ukrainian European Champion Nataliya Ilkiv who now promoted to the U20 category aged 17. For Smolska this was her last chance to win the title, but she grabbed it with both hands. After losing twice this year in European Cups in Tver and Teplice she overcame her four opponents today.
Anja Stangar won the bronze for Slovenia. She defeated semi finalist Adele Ravagnani.
Russian Natalia Golomidova came over Hungarian national champion Patricia Toth when she scored a yuko in the last minute.

Watch photos and results at this start page: