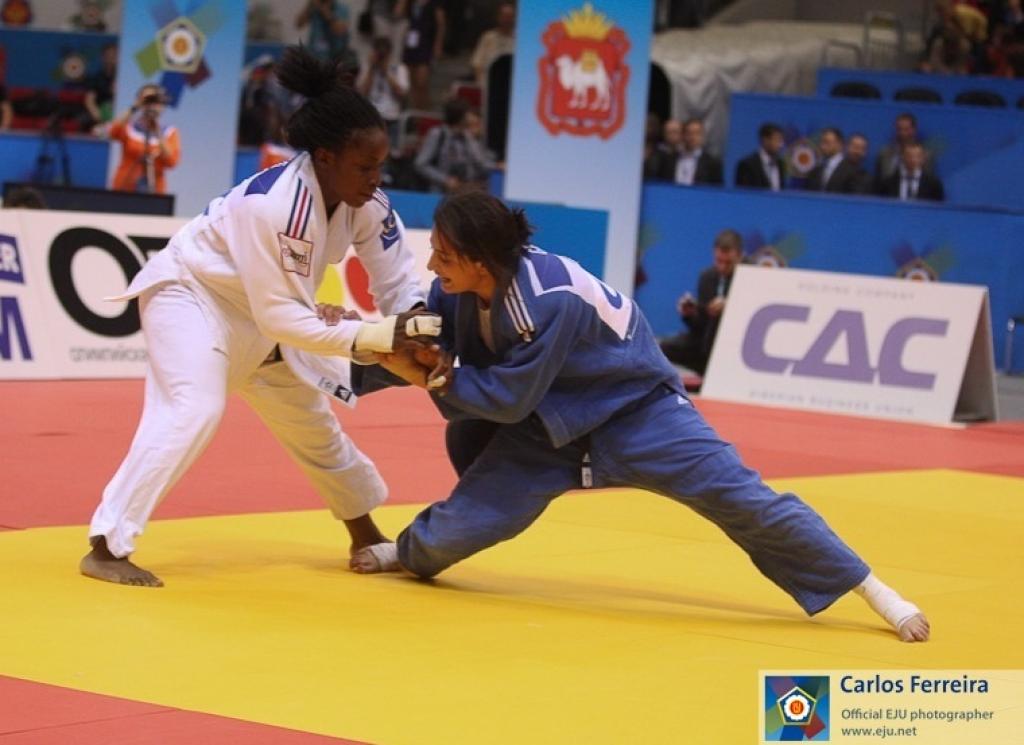 Gevrise Emane has won the European Championships title U63kg. Not for the first time though. She prolongs her title of last year in Istanbul and won her fourth title. In 2006 and 2007 she won the European title U70kg. Now the World Champion dominated her category again and could break the steaming Yarden Gerbi from Israel. She reached the final for the first time in her career leaving her compatriot Alice Schlesinger with bronze. Both were in a fight this year for Olympic qualification.
France however also won two medals as Clarisse Agbegnenou won bronze after being victorious over Schlesinger.

Emane defeated five opponents today and could avoid tough challengers in the beginning as highest seeded. Gerbi had a very tough road to the final starting with German Champion Martyna Trajdos in her first match and Marijana Miskovic of Croatia in her second match. Gerbi lost five matches previously from Urska Zolnir but today the Israelian succeeded to beat her and reached the semi final against French Clarisse Agbegnenou who she beat as well.

Gerbi: “This is my second European Championship and I feel great about the silver medal. It was a good day for me. The quarterfinal against Zolnir was the highlight of the competition for me. Urska is a very strong opponent, she is mentally strong. Also in the final you always have a chance to win. I tried to give a 100 percent but it wasn’t enough this time.“

Agbegnenou defeated Ramila Yusubova (AZE) in her bronze medal fight. “This is my first medal at the Europeans and I am very pleased with my day. The quarterfinal was my best fight today. Obviously I had hoped for more, but hopefully next time I can take the first place next time. With Emane we have a good rivalry in the French team and we push each other to a higher level.”

Urska Zolnir ended fifth just like ten years ago but won silver in 2007, bronze in 2008 and the European title in 2009 in Tbilisi. She competed for the 11th time at the Europeans starting in 1999. Zolnir stranded early in 2004 at the Europeans as well but won a bronze medal at the Olympics in Athens. Who knows, she may be right again. Alice Schlesinger took Israel’s second medal in this category. Israel won three medals in total today, also Iosef Palelashvili U73kg.
Schlesinger: “It was okay and it was a good preparation for the Olympic Games. I know fitness-wise I am not yet as good as I can be. It was a good result for the condition I am in now. I am a little disappointed, though, because I wanted the gold. Only now I realised how much work I still need to do for the Olympic Games.“

The winner said: “It’s my fourth European title and I am very happy with it, and not only with the title but also with the way I performed today. I am happy with the judo that I showed today. We are working for that every day and today I was able to show my technique and this was really nice.”Humble she added: “ I think I’m going to the Olympic Games. This Championship was an important part of my preparation for the Olympic Games.“

Watch the pictures in our media gallery: