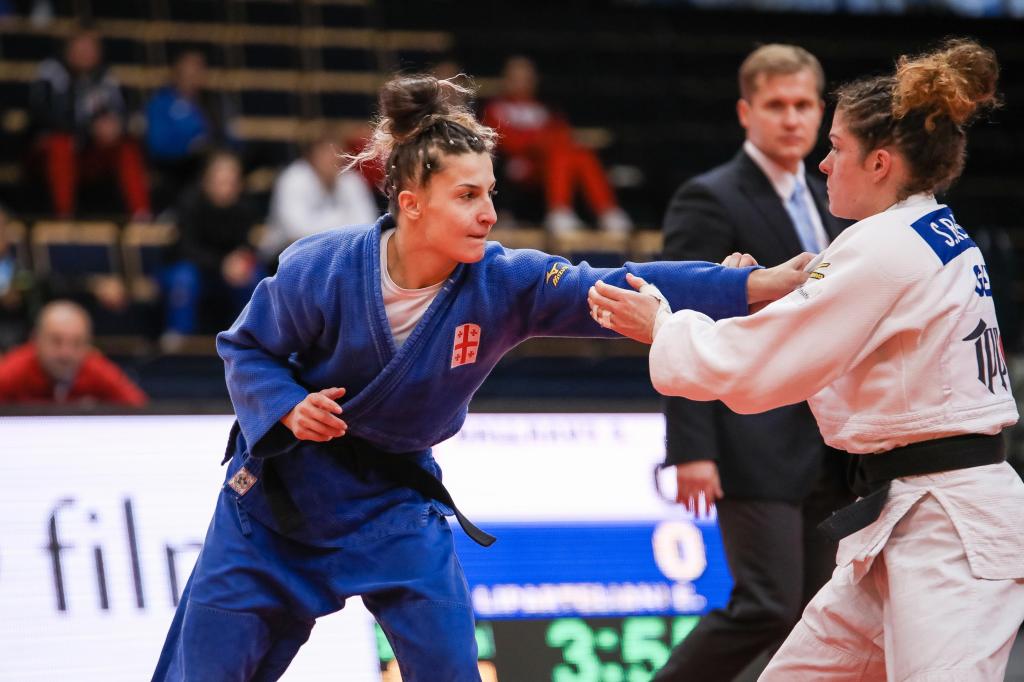 Day one of the Junior European Championships in Vantaa got off to a tremendous start, the athletes quickly putting the scores on the board with some strong contenders setting a high standard.

Of course the day was not without its surprises as the top four seeds in the -66kg didn’t make it to their respective quarter final contests, the top four in the -57kg managed a little better but still left without any medals. The ranking is incredibly important but it goes to show that anything can happen.

Though the Georgian team lost some of their athletes before the quarter finals, two judoka were really making their mark in Finland. The Zagreb Grand Prix bronze medallist, Eteri LIPARTELIANI in the -57kg category displayed some traditional Georgian techniques, winning each of her preliminary contests with an explosive uchi mata variation.

Only Pleuni CORNELISSE (NED) and Silvia PELLITTERI (ITA) managed to take the Georgian past the first minute of contest in the quarter final and her gold medal contest. Having watched her opponent throughout the day, PELLITTERI knew to avoid the huge technique but unfortunately for the Italian, that wasn’t the only one in LIPARTELIANI’s arsenal. With a waza ari on the board against her, PELLITTERI put in a desperate attack in the final minute, which was instinctively countered, putting the Georgian on top of the podium.

LIPARTELIANI had to settle for a Junior European silver medal last year in Sofia, followed by a bronze when she stepped up a division in to the U23 competition in Gyor. Since then, the 19 year-old has worked solidly to combat her senior opponents and finally snatched her first IJF World Tour medal in Zagreb.

Incredibly, to add to her collection of achievements over the past year, LIPARTELIANI made history today, taking the first female gold in a Junior European Championships and hopes this will motivate her team to follow in her success and show the world how much women’s judo has improved in their country.

Of course this is very important for me, and I really have more motivation now and I will be much better in the future, also this is extra motivation for my team mates and we will do our best to try and get as many medals as possible.

In the heavier of the men’s categories today, Giorgi TUTASHVILI found himself in much tougher situations than his female counterpart. Though he managed to avoid any golden score in his first three contests, the 20 year-old came up against terribly difficult opponents in the semi final and final, fighting for a total of 13 minutes and 45 seconds.

A string of penalties against Ibrahim ILAYEV (AZE) in his semi final saw both of the athletes exhausted after eight minutes but the Georgian was not ready to give up on his place for the fight for gold.

Adil OSMANOV (MDA) had seen out some very strong opponents on his way to the final, including TUTASHVILI’s team mate, Luka KAPANADZE. His chances were high going in to the contest and he even managed to even the score towards the end of the contest and took it in to golden score. Then just under two minutes in to extra time, TUTASHVILI scored with tsuri goshi.

TUTASHVILI, like LIPARTELIANI, took his first IJF World Tour medal this year in the Tbilisi Grand Prix, losing out to Tal FLICKER (ISR) in the final, but still an incredible feat in front of his home crowd and with this achievement, is in good stead for the upcoming tournaments.

There were five weight categories competing today and aside from the Georgian triumphs in the -66kg and -57kg categories, Salih YILDIZ (TUR), brother of Cadet European Champion in the -57kg category, Ozlem YILDIZ, took his Junior title in the -60kg weight class. In the -48kg category, Russian Irena KHUBULOVA took the gold and dominated her group.

Another very impressive young athlete took her second Junior European title this year, the now 18 year-old, Faiza MOKDAR, became Cadet and Junior European Champion in 2018, only narrowly missing out on a Junior World bronze medal in Nassau. With so much potential alongside her calm competitive demeanour, she is absolutely one to watch.

The Georgian success has placed them at the top of the medal table followed by France, Russia and Turkey and 11 of the 21 nations competing today took home at least one medal. However there are still two more days of individual competition taking place in the Energia Areena here in Vantaa so still lots of time and many contests to change those results. 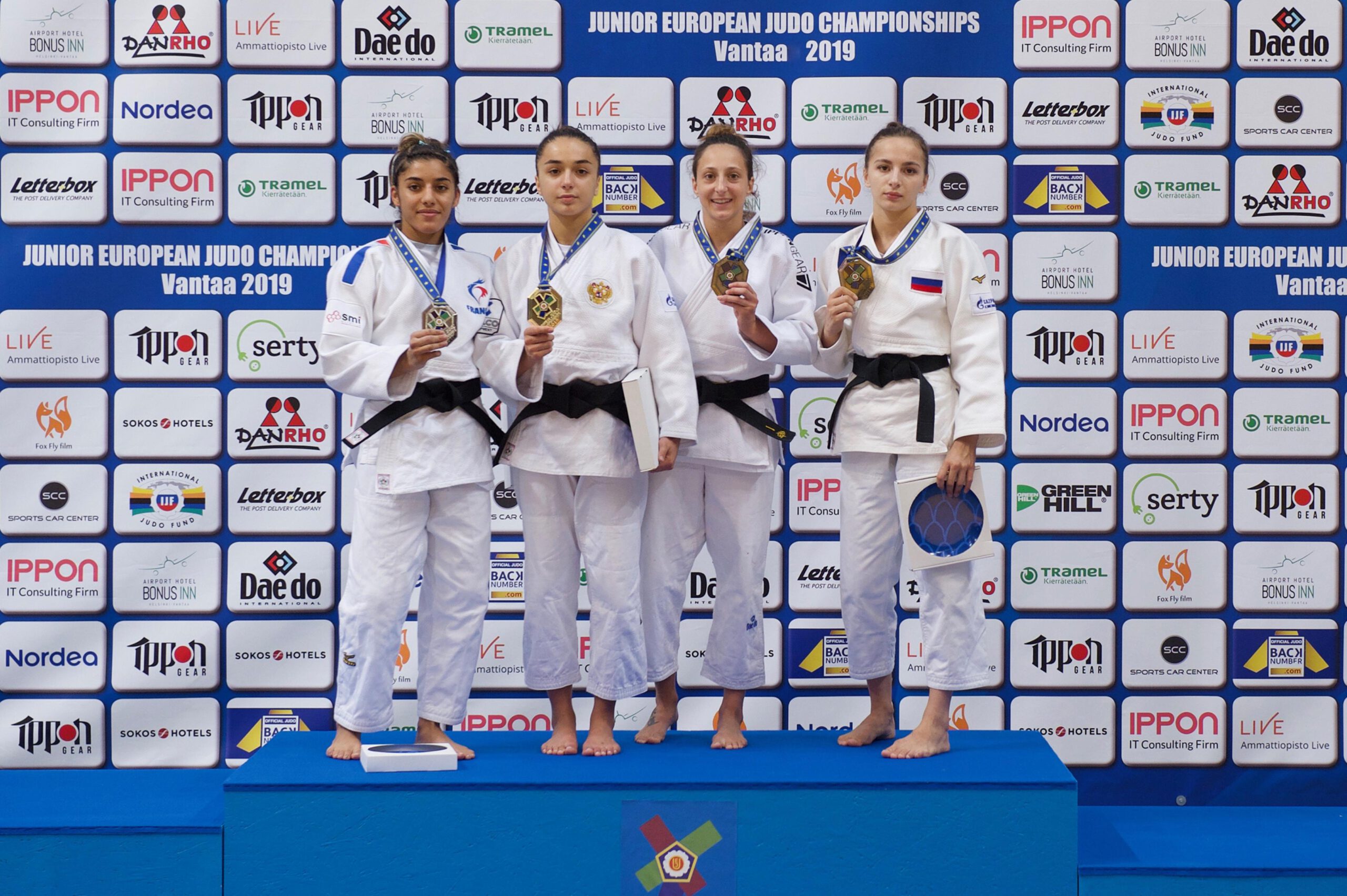 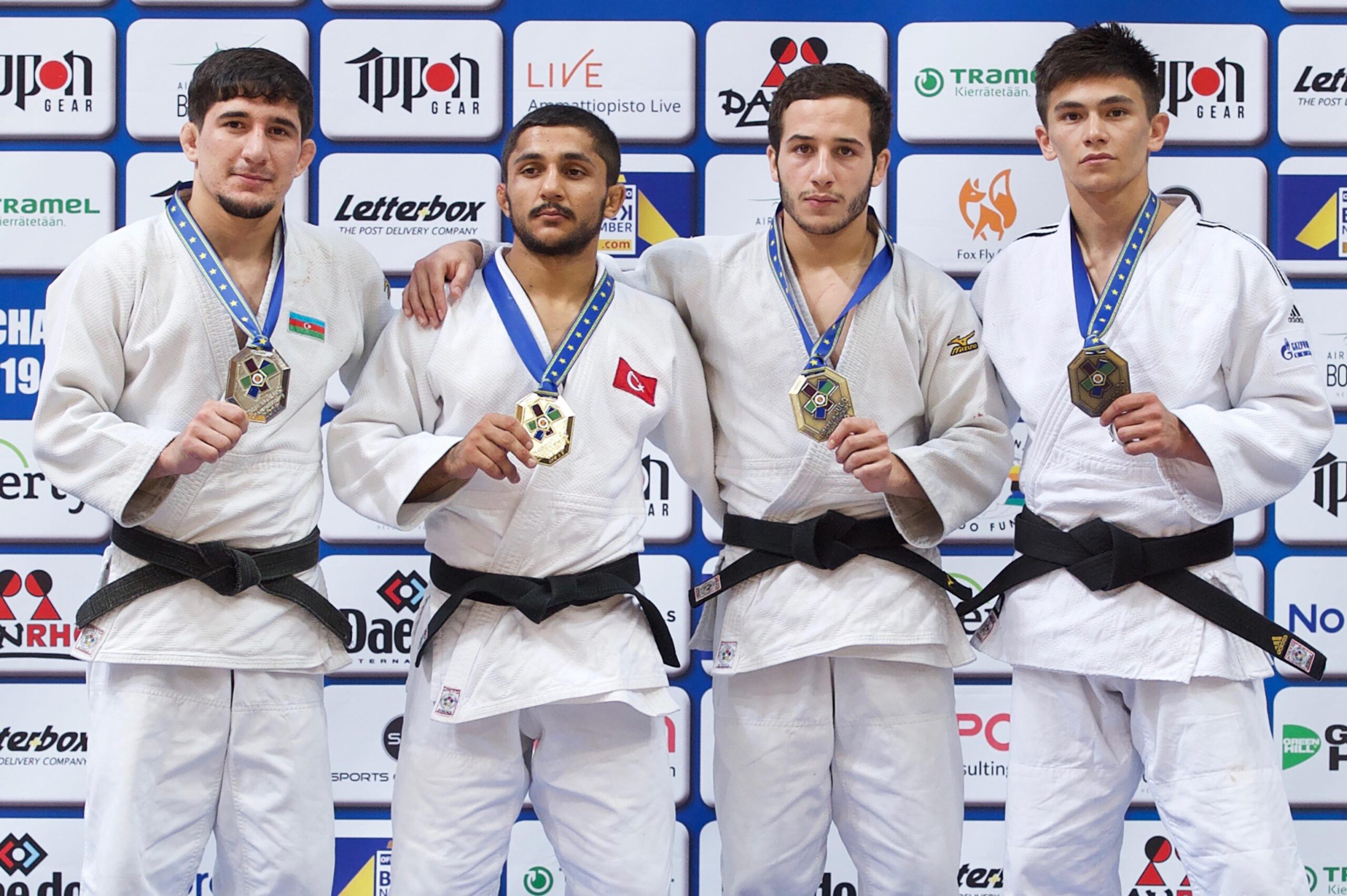 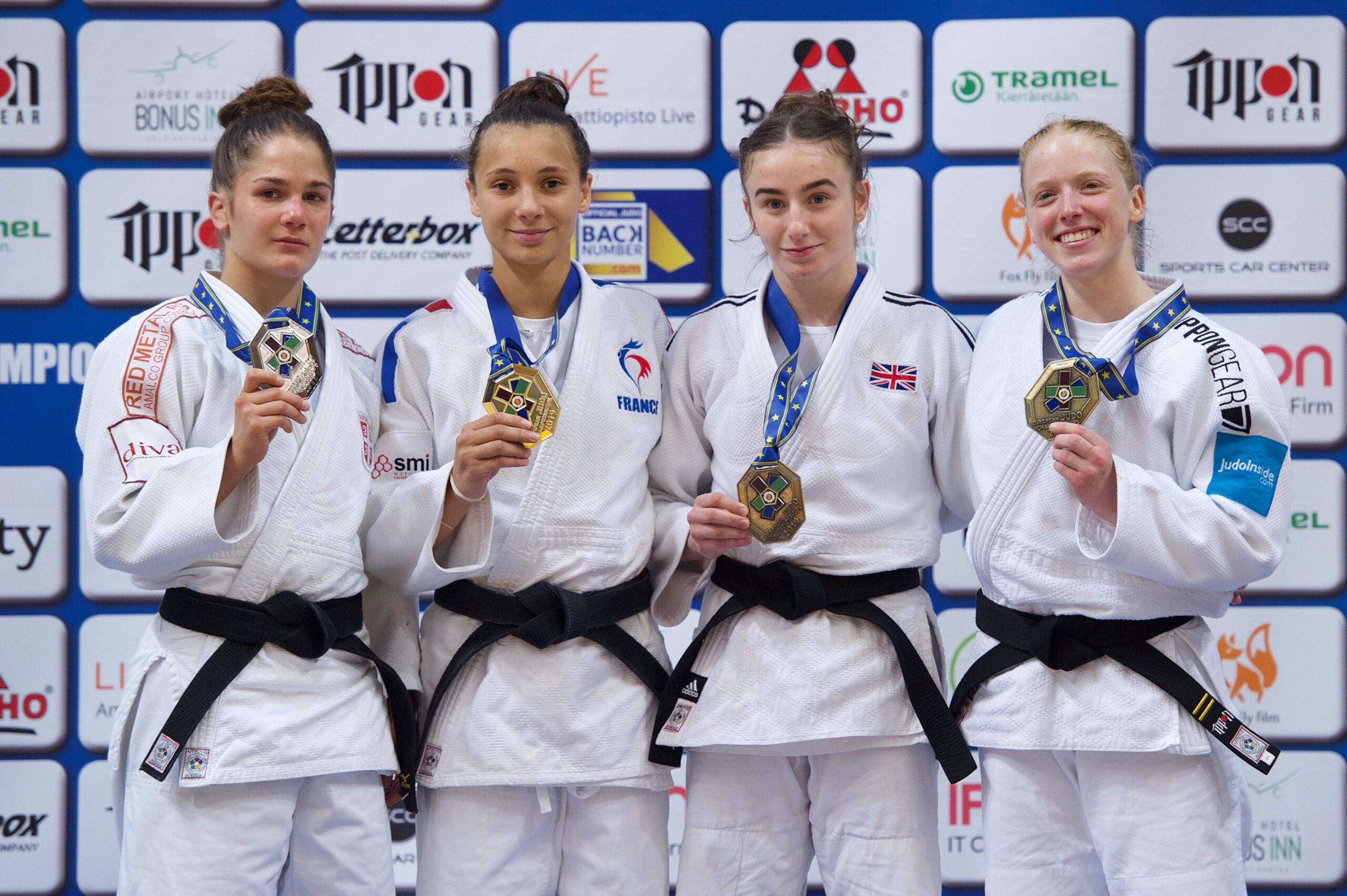 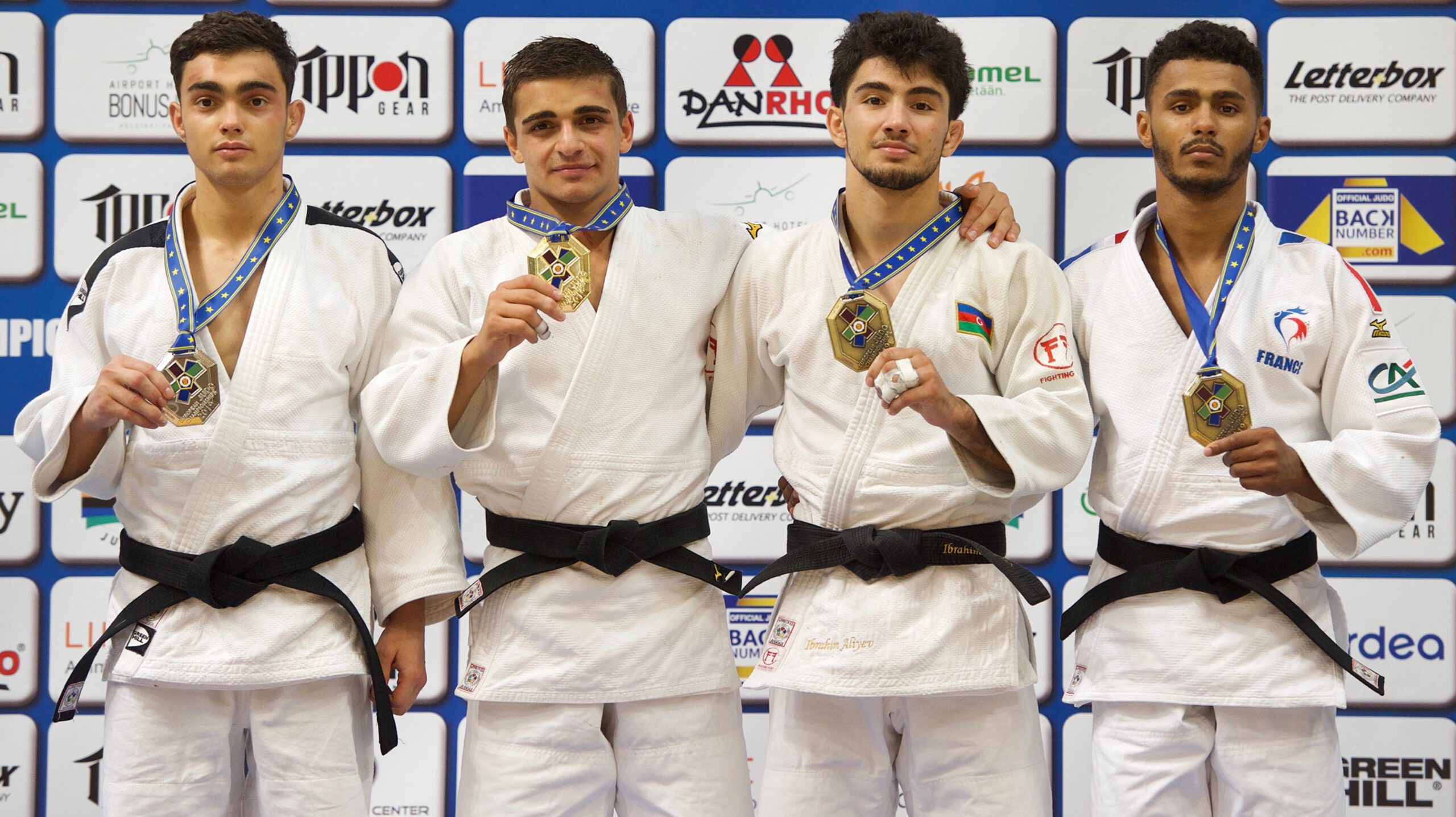 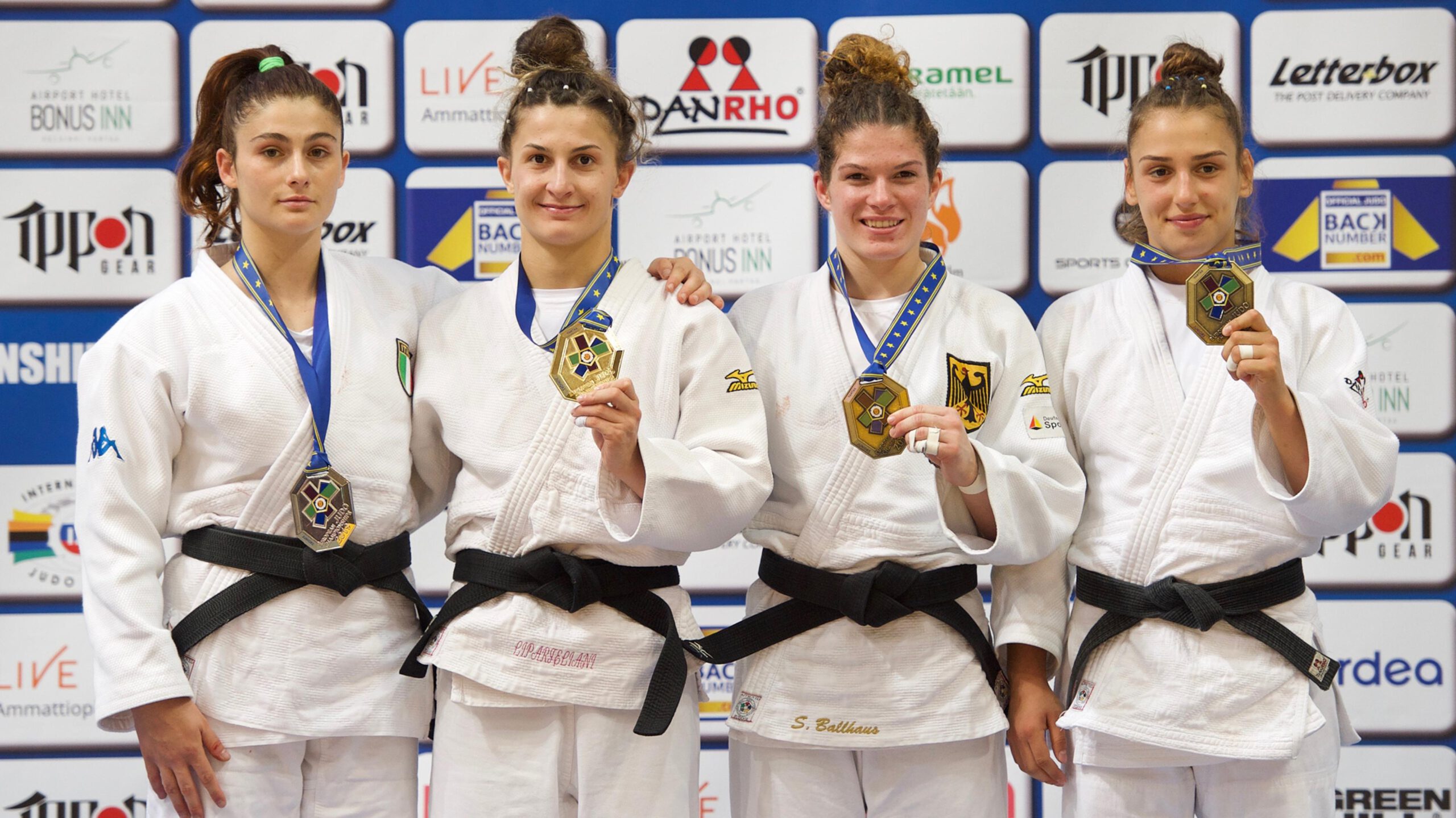