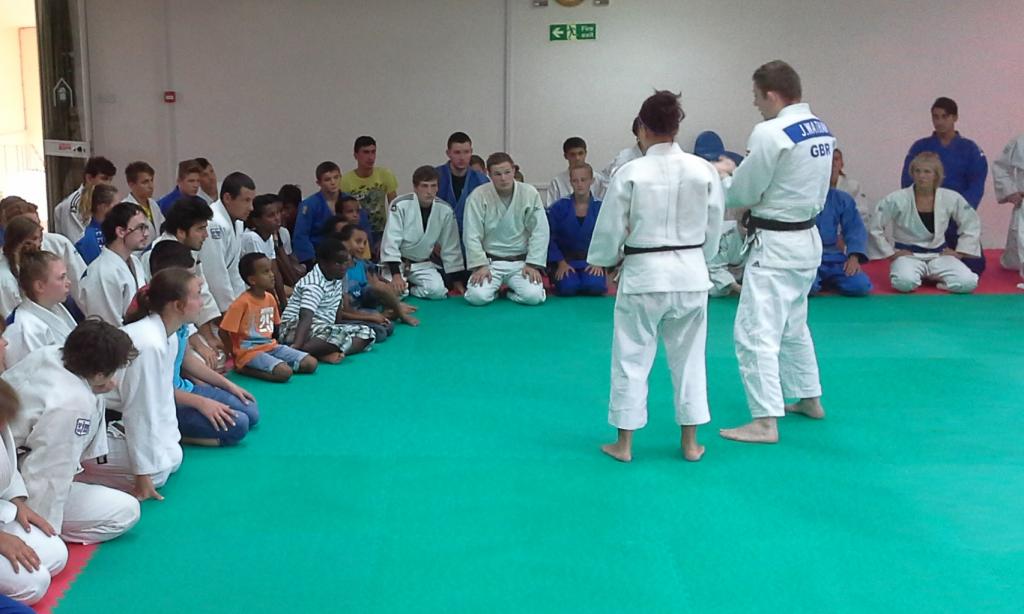 After spending 10 days together in an intensive programme, the participants of the Judo for Peace went through a mix of emotions on the last day. Now that the project came to an end, all the participants went back to their countries and back to their normal lives. But the judoka will not bid a final farewell to their new friends – this is just the beginning. Already the leaders had a meeting with the managers of the Malta office of EUPA, Marvic Debono, Robert Debono and Cynthia Miskova, where together they discussed the possibilities of taking this project a step further, and create umbrella projects in other European countries. The persons who are going back are not the same people who arrived in Malta ten days before, but persons who are more complete, more self-confident, can communicate better, have better leadership skills and better judo. The shy little girl, who nearly fainted on the first day after the group presentation, could now participate in conducting a session. The young boy who could not communicate with the rest of the participants due to a language barrier, can now integrate in the team, and explained a technique during a judo session, another young boy who felt that training with girls is not the best thing, had a fantastic randori (practice of competition) with a female participant of the project and actually enjoyed it.
During this project, the participants were exposed to various realities. They prepared and gave a session to special Olympic athletes. One of the participants, who are also a Special Olympics athlete himself, gave a very motivating talk to the kids where he encouraged them to keep on training, and even try to join in mainstream sport training. The participants also prepared a session for the migrant children, and one could easily see the joy of the children who did not hesitate on the mat throughout the 2 hour session.

Though the participants already give a lot of their time to volunteering in the sport of judo, the Judo for Peace group reached out to the island of Malta and tried to give a helping hand in other sectors. Part of the group helped the feast organisers of Lija, where they assisted with the decoration of the street. Another part of the group stayed over at the University Residence where they gave a session to collect funds for the Organisation for Friendship in Diversity. The bulk of the group went to l-Għarusa Tal-Mosta Garden to assist the local council with a clean-up activity. Several bags of rubbish were collected, but also a very good deed was done on the day. During the clean up, one of teams noticed a pouch with a passport, medical documents and other documents, and handed it over to the leaders. One of the leaders identified the owner of the pouch as an ex colleague. He was contacted and came personally to the University Residence to thank the participants and to admire the work that was being done.

Though the program was extremely full, the participants were also given the opportunity by the Malta Tourism Authority to visit Mdina, Ta Qali and Dingli Cliffs, where they could appreciate the millennia of history of Malta.

In the closing, Mr Envic Galea, General Secretary of the European Judo Union, went through the Judo Moral Code. He said that Judo creates lifelong friendships, and no matter how much time has passed, you can always rely on your judo friends. Judo is also the basis for respect; it teaches self-control which is what is needed to go that one step further to become a proper champions; and It gives the courage needed to stand up against something you think is wrong.
Hon Chris Agius also paid a visit to the participants at the University Residence. He was impressed by the number of Judoka who accepted the invitation to come to Malta and congratulated the Maltese organisers for their very good professional organisation. He said that he hopes that this project will continue in the coming years. During his visit the Parliamentary Secretary was presented with a plaque of the European Judo Union, sent personally from Sergey Soloveychik President of the European Judo Union with his personal greetings as a thank you for his support to this first EU Project.