Europe back in business after 6th and magical gold medal 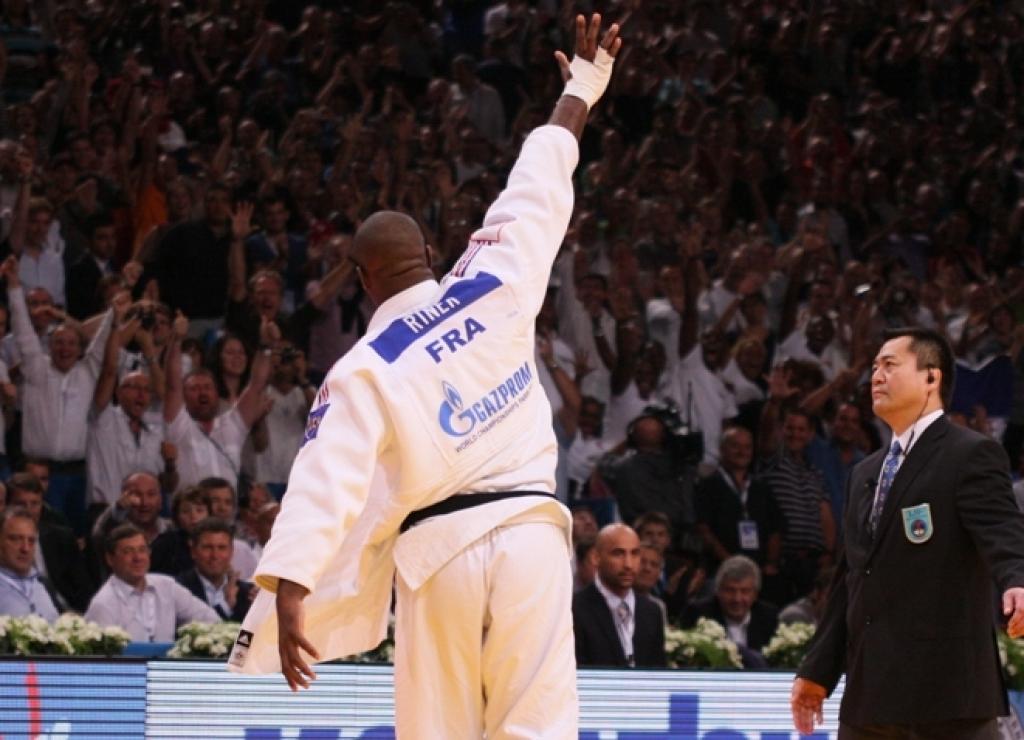 Teddy Riner won a record fifth title at the 29th World Judo Championships in Paris on Saturday when he threw the German Andreas Toelzer in the heavyweight final to ecstatic applause from a packed Stade de Bercy.
Riner overhauled some of the most distinguished men in the sport’s history when he took the Over 100 kgs gold medal. These are his countryman David Douillet and Japan’s Naoya Ogawa and Yasuhiro Yamashita, all heavyweights, as well another Japanese, the dazzling middleweight of the 1970s, Shozo Fujii. Given that Riner is still only 22 years-old – he won his first world title in 2007 when he was only 18, the youngest in the annals of the sport, he seems certain, barring serious injury or retirement, to add further titles in the years to come.
The one title that eludes the 2.03 metres tall, 128 kgs fighter is the Olympic crown, and he is now the firmest of favourites to secure that in the London Games next year. Today, he showed little evidence of the back injury which had handicapped him earlier in the summer and won all his bouts inside the statutory five minutes.

In the semi-final, the Frenchman fought Sung-Min Kim but the Korean was caught with a perfect osotogari (major outer reaping throw), the favourite technique of Riner, which upended his opponent, slamming him on his back for ippon. This brought him into the final against the German Andreas Toelzer, who was not overawed by the occasion and, although he was wary of Riner’s right-handed throws, he also put in some strong left-handed attacks of his own. However, after three minutes 33 seconds, Riner, who had had several uchimata (inner thigh throw) blocked, shifted the direction and unleashed a superbly timed ouchigari (major inner reaping throw) to land the German on his back. The crowd rose to him in delirious appreciation.

The bronze medallists were Kim and Alexander Mikhaylin of Russia after his opponent, Cuban Oscar Brayson, conceded a penalty point in extra time, so losing on the ‘Golden Score’. The Korean recovered from being a yuko down to Mohammad Rodaki of Iran to produce an uchimata. This knocked down the Iranian, who submitted with a damaged shoulder almost as soon as the hold-down was put on.

In the men’s under 100 kgs class, Tagir Khaybulaev of Russia won his semi-final against Elco van der Geest on an armlock and then in the final threw Maxim Rakov of Kazakhstan with a smooth hip throw, sodetsurikomigoshi, to take the gold medal. The bronze medals went to Irakli Tsirekidze of Georgia, the 2011 European bronze medallist, and the highly promising 20 year-old Lukas Krpalek of the Czech Republic, who defeated Van der Geest of Belgium with haraigoshi-makikomi.

Not a single European judoka in the women’s O78 kgs division semi-finals. The defending champion, Mika Sugimoto of Japan was beaten by Qian Qin of China, a reverse of the result in both the heavyweight and Open finals at the World Championships last year. The pair tumbled to the mat in the closing stages of the bout and Qin secured munegatame (chest hold-down) after extracting the Japanese girl’s leg from between her two limbs. In the other semi-final, Wen Tong, the Olympic champion, held down Idalys Ortiz of Cuba.

Despite the absence of Europe, it collected 26 medals, four more than last year. 6 Gold medals instead of the three of 2010. Asia lost 2 gold medals to Europe so Europe is back in business for the Olympic Games.

Watch great pictures of today in our media gallery: