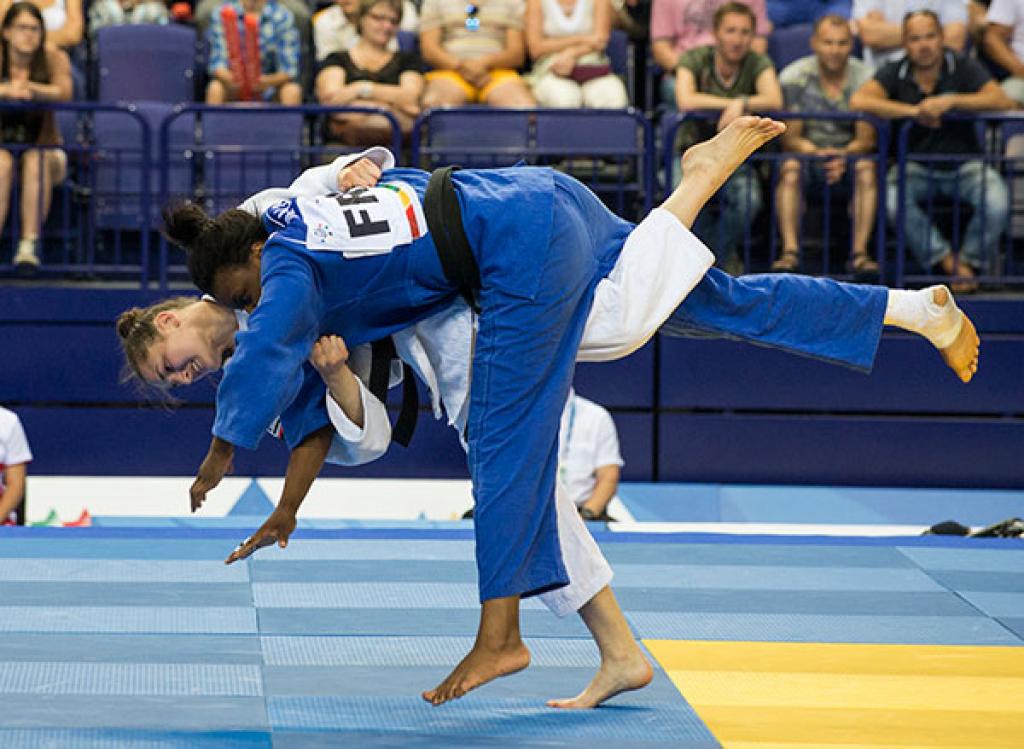 The great Tatneft Arena showcased to belong among the best judo venues in the world. With a 10,000 seating capacity, the ice rink has been completely refurbished and decorated to host the judo tournament.

In the first category of the day, World Number two, Abigel Joo, gave her first medal to Hungary after having defeated the two-time-bronze medallist of the European Junior Championship: Madeleine Malonga, from France. Never in danger, Joo gave no chance to the French and sent her two times to the floor for two waza-ari (uchi-mata), equivalent of ippon. The Hungarian celebrated her victory with a little dance and a huge smile on her face while she was listening to the FISU anthem at the awarding ceremony. Joo is the first female Hungarian to win the Universiade.

In the Men’s -100kg category Lukas Krpalek (CZE) showed to be the strongest. The European Champion and winner of the Paris Grand slam this year added a line to his already long prize list. Even if the opposition with Zafar MAKHMADOV (RUS – winner of the Miami Grand Prix last June) was particularly strong in the final, a tactical sumi-gaeshi executed on the edge of the competition area gave a yuko and the victory to Krpalek. The Czech lost twice previously to Makhmadov but was simply the best in Kazan.

In the women’s category +78kg the bronze medal went to Maryna SLUTSKAYA (BLR), who arm-locked her opponent Anastasiia SAPSAI (UKR). The second bronze medal was won by Mariia SHEKEROVA (RUS). The event was won by Rochele Nunes who surprisingly defeated the London Olympic Champion, Idalys ORTIZ BOCOURT (CUB) in the dying seconds of the final.

Barna Bor won the second medal for Hungary winning a silver medal in the plus category. He lost against the young CHO Guham (KOR) who proved to be more tactical than the Hungarian. Despite a tough fight, both athletes showed a really good FairPlay spirit at the end of the match.

The first bronze medal went to Maciej SARNACKI (POL) who scored ippon against Juhan METTIS (EST) with a tremendous uchi-mata. The last medal of the category went to Renat SAIDOV (RUS), who probably expected a better position in front of his public.

Later in the tournament also another Olympic Champion will fight: Arsen Galstyan.