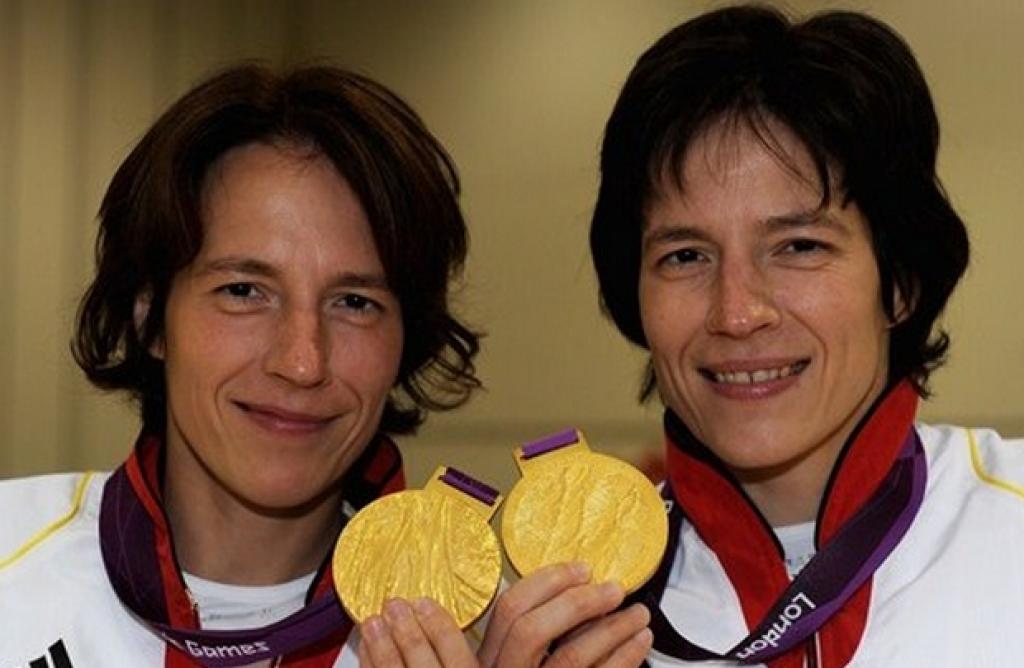 Europe has won all gold medals at the first day of the Paralympic judo tournament in London’s ExCel. German twin sisters Carmen and Ramona BRUSSIG both won gold medals. Ramin IBRAHIMOV (-60kg) won gold for Azerbaijan and Davyd KHORAVA (-66kg) for the Ukraine.

Women’s -48kg:
In what was a rematch of the 2011 world games gold medal match between Carmen BRUSSIG (GER) and LEE Kai-Lin (TPE) just with a different winner, BRUSSIG completed her collection of medals and crowned her day with gold. She had defeated the European champion Victoria POTAPOVA (RUS) in her first bout, then dominated over Ukraine’s Yuliya HALINSKA and finally won over her eternal rival LEE.

LEE had been in the lead with a yuko advantage, but after half time into the bout BRUSSIG scored a waza-ari and defended her lead until the end.

Women’s -52kg:
Only 15 minutes after Carmen BRUSSIG had won her gold medal, Ramona BRUSSIG followed suit and defeated WANG Lijing (CHN) in less than a minute by a choke technique. In her first two bouts she did not have any problems in overcoming Gulhan KILIC (TUR) and Alesai STEPANIUK (RUS).

Sandrine MARTINET (FRA), silver medallist from Beijing and gold medallist in the 2011 world games, had started her day with a win over NIKOLAYCHYK, but suffered a leg injury in her next bout against WANG and could not continue the competition.

Carmen BRUSSIG said, “I am very happy. It was our perfect day.” Ramona nodded, admitting, “It was perfect for me as well. It was a special day. We will not have such a day so often in our lives.”

Since they started judo at the same time in 1986, when they were nine years old, they have trained together, and as they had the same timetable at London 2012, they trained and prepared for the competition together at the ExCeL warm up area. “We spent the time together from the beginning of the day,” said Carmen. “Between the fights, we motivated each other.”

The twins have not decided whether they will continue competing. “We have reached our goal with big success here. We brought two golds for Germany. There is nothing more than that. We are 35 years old, so we don’t know if we (will) keep going for the next Paralympic Games.”

Men’s -60kg:
Ramin IBRAHIMOV (AZE) left no doubt that he was determined to win the gold medal. He won all his four bouts by ippon and none of his bouts lasted longer than three minutes. Also in the gold medal match against LI Xiaodong (CHN) he was done after one minute and 52 seconds and LI had to settle for silver.

Beijing’s Paralympic champion Mouloud NOURA (ALG) ended Great Britain’s hope for a possible gold medal in the first round by beating local hero Ben QUILTER (GBR). However, in the next round NOURA himself had to bury his hopes to defend his title after losing to LI.

Eventually QUILTER and NOURA stood next to each other on the podium, both winning a bronze medal. “It’s been one hell of a journey. I came here for gold and was extremely disappointed after my first match Mouloud NOURA (ALG), but to get bronze under the circumstances is great. I can’t say I’m frustrated because of seven weeks ago I didn’t think I would be at London 2012.”
“The ExCeL is absolutely full on. It kept me going despite the disappointment of the loss. I’ve got four more years in me I think, but I will rest, have a McDonalds, and hopefully not hobble down the aisle.” QUILTER will get married later on this year.

Men’s – 66kg:
Davyd KHORAVA (UKR) needed only two wins and a total time of 21 seconds to claim the gold medal. In the first round he had drawn a bye. His opponent for the second round, Jani KALLUNKI (FIN), had had to withdraw from the competition as an old injury had started to bother him again and he did not show up for the weigh-in in the morning. So when KHORAVA started his competition he was in the semifinal alreday, which he won over David GARCIA del VALLE (ESP) in only five seconds.