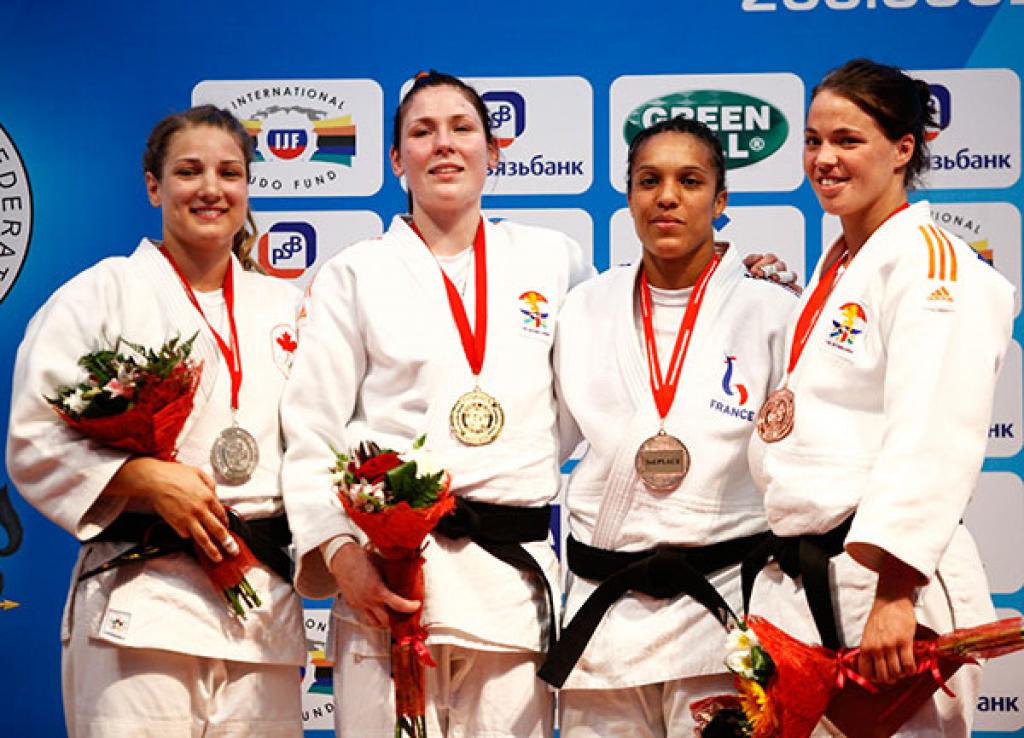 Where Asia dominated the first of the World Judo Masters in Tyumen, it was Europe to get back strongly at the second day claiming all gold medals in the men’s categories and again a great gold medal by Dutch Kim Polling who’s won everything she competed this year.

European champion Kim POLLING (NED) once again delivered on the big stage as she won the top prize in Tyumen. POLLING threw world number one Kelita ZUPANCIC (CAN) with an ippon-seoi-nage in the second minute to win the first of what will surely be many World Judo Masters titles. In the semi-final Olympic champion Lucie DECOSSE (FRA) suffered a flashback to the Paris Grand Slam as she was again defeated by POLLING. An inactive DECOSSE received three penalties while her rival had an unblemished record to seal a place in the final. In the second semi-final ZUPANCIC bested KIM Seongyeon (KOR) on penalties to confirm her place in the gold medal contest.

The first bronze medal was won by Linda BOLDER (NED) who forced KIM to submit to an juji-gatame after a seamless transition into ne-waza. The second bronze medal was secured by a defiant DECOSSE who bounced back from a semi-final disappointment to overwhelm Onix CORTES ALDAMA (CUB) with an ouchi-gari for a waza-ari and ko-soto-gake for a yuko.

After stepping off the medal podium DECOSSE confirmed she would retire after competing at the World Championships where she believes she could defeat rival POLLING.

“I was here to win but also for a competition as I’m still adapting to the new rules,” said the World and Olympic Champion. “I realise that I need to be more active. In Paris Grand Slam I lost by ippon to POLLING having made a mistake but this time there was no mistake which was a positive aspect for me. I will end my career at the World Championships in Rio and hopefully with the title.”

World number 16 Ivan Nifontov come out on top in the -81kg category as he defeated Paris Grand Slam bronze medallist Keita NAGASHIMA (JPN) with a juji-gatame. While many of the leading names had to be content with repechage action, NIFONTOV prospered as the crowd spurred him on to win the prestigious gold medal as he clung on to NAGASHIMA’s arm as the Japanese judoka tried to climb to his feet to escape. The first semi-final saw NIFONTOV defeating world number five Antoine VALOIS-FORTIER (CAN).

World number three Avtandil TCHRIKISHVILI (GEO) bundled over VALOIS-FORTIER for a yuko for the bronze medal.

London 2012 bronze medallist Ilias ILIADIS (GRE) showed some characteristic explosive judo on his way to winning gold in a formidable -90kg field. However, the final with Kirill DENISOV (RUS) could not take place as home judoka was unable to compete in after suffering a recurrence of a hand injury which saw Greek star ILIADIS awarded the victory. The first semi-final was a repeat of the -90kg European Championship final and, to the home supporters delight, the outcome was the same. World number one Varlam LIPARTELIANI (GEO) received a penalty which settled the contest against DENISOV who sealed the final spot on the medal podium.

A European bronze medal was won by LIPARTELIANI who marked the national day of Georgia in style as he pulled on the arm of Hatem ABD EL AKHER (EGY) for a juji-gatame.

World number two Henk GROL (NED) lost his second consecutive World Judo Masters final after losing out to the hard-working Elkhan MAMMADOV (AZE). London 2012 bronze medallist GROL was caught for a yuko by the Baku Grand Slam winner who showed he’s still in the prime of his career at the age of 31. In the first semi-final MAMMADOV was not content to defend his advantage of two penalties against Sergei SAMOILOVICH (RUS) and went on the attack. His commendable fighting spirit was rewarded as he produced a ko-uchi-gari for ippon. In the second semi-final the reigning World Judo Masters silver medallist GROL emerged to defeat Cyrille MARET (FRA) by waza-ari.

The first bronze medal was won by MARET who launched Ramziddin SAYIDOV (UZB) with a harai-goshi for ippon. The second bronze medal was awarded to Elmar GASIMOV (AZE) who frustrated SAMOILOVICH and the Russian fans by defending his waza-ari advantage before adding two yuko scores.

World number four Adam OKRUASHVILI (GEO) bested reigning World Judo Masters champion Rafael SILVA (BRAZ) with a clinical performance in the heavyweight final. As the finalists squared off in their first meeting it was OKRUASHVILI who captured the gold medal and with it the headlines. The Georgian opened the scoring as he turned SILVA over from an uchi-mata attempt for a yuko and added a waza-ari before sealing the win with a hold down as he transitioned from a mune-gatame to a kuzure-kesa-gatame.

The first bronze medal was claimed by TOELZER who managed to get MOURA off balance with an uchi-mata attempt and used his power to follow through and earn the ippon. The second bronze medal was clinched by Renat SAIDOV (RUS) who sent the crowd into raptures as he lifted SANTOS with a spinning uch-mata for ippon.