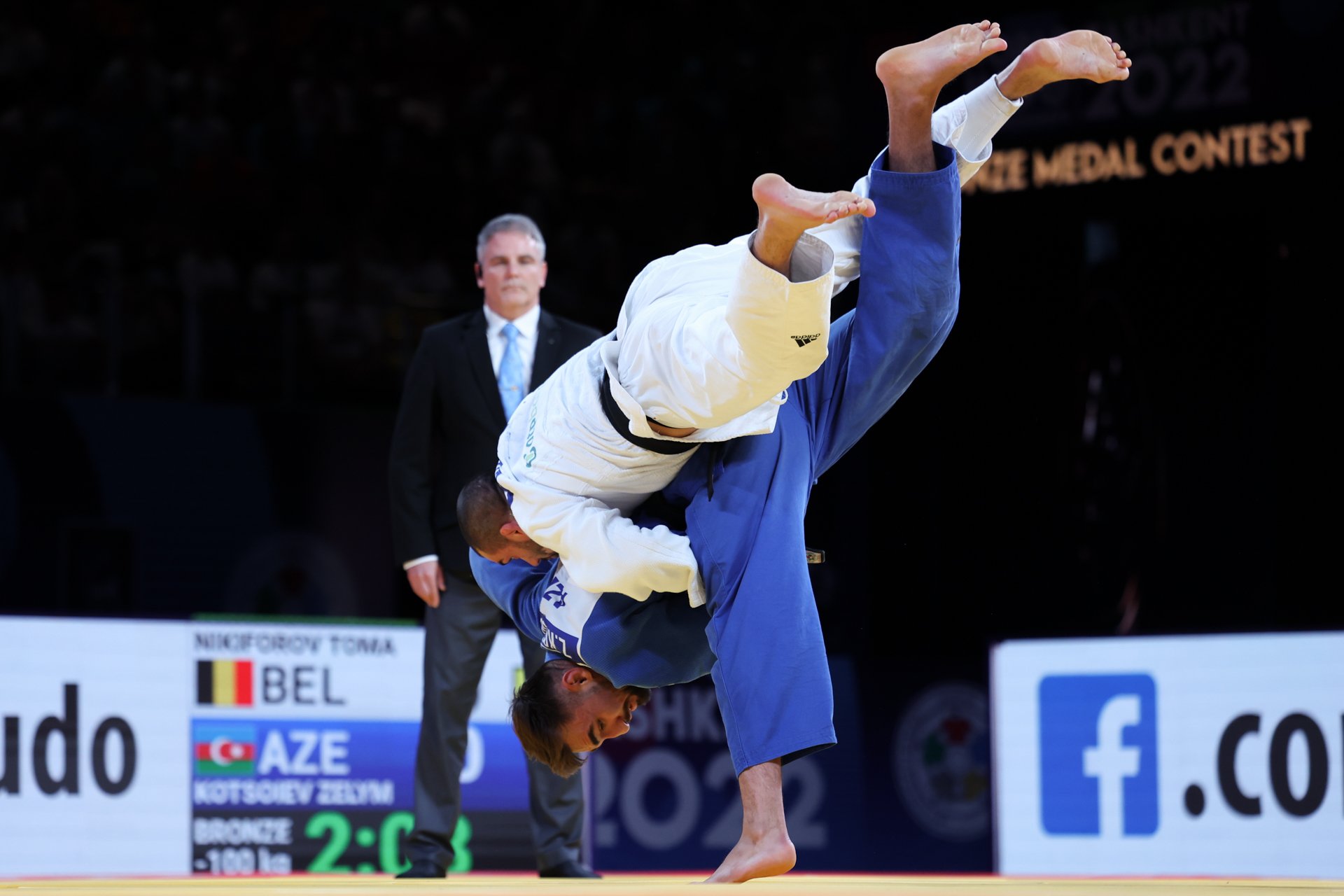 What an opener for the final block of the world championships in the -78kg category. The were no expectations for the 18 year-old EYOF and junior European champion, Yelyzaveta LYTVYNENKO (UKR) coming in to her bronze medal contest against the current Olympic champion HAMADA Shori (JPN), and perhaps the lack of pressure allowed her to relax.

We have been massively impressed by the young Ukrainian the past couple of years, who only in 2021 became the cadet European champion, but today she truly excelled and arguably had the ippon of the day.

Only 22 seconds in to the contest, the calm and collected Lytvynenko executed the most perfect sasae tsurikomi ashi to the the bronze medal and silenced the arena before an almighty eruption of cheers.

I had high expectations for myself, I came here to take a medal and to be sure of myself, to prove that all the hard work will pay off and I can manage to take home a medal.

Once we had been given a minute to realise what had happened, we then welcomed the current and 2021 European champions, Alina BOEHM (GER) and Beata PACUT-KLOCZKO (POL) for the second bronze medal contest. This head to head went a little longer than the opener and both were looking evenly matched until the final minute when Pacut-Kloczko managed a waza ari score from a makikomi attempt, transitioning immediately in to osaekomi to take her first senior world medal.

I am so excited, I have been waiting for this medal for a few years. Now I have it I am really happy. My judo has been improving and I think I can only go up from here, I just want more and more. I really believe in myself and my judo, today my uchi mata was beautiful and I feel like it is a good sign for the future.

It was an incredible final as Brazil took their second gold medal, Mayra AGUIAR was especially elated with this result as she now counts three titles, her first in 2014.

Europe had two guaranteed bronze medals in the -100kg category, and deciding the first medal was 2021 bronze medallist, Ilia SULAMANIDZE (GEO) and 2019 bronze medallist Michael KORREL (NED). The Dutchman has more experience but looking at the head to head tally, it is 2:2. Korrel doubled up on attacks in the final minute to gain a waza ari lead and in the end was all he needed to take his second world bronze.

This medal feels different than the first but still good. This year I fought Sulamanidze twice already, he beat me once so I knew what to do but that it would be a really tough fight, but I managed a sneaky score so I’m happy. I am one of the happiest guys in the world right now, really. For the first time I became the European championships, I married a great wife and now I can celebrate this bronze medal.

Similarly, Toma NIKIFOROV (BEL) and Zelym KOTSOIEV (AZE) have a 2:3 history and this was the Belgian’s opportunity to even the results. An initial uchi mata attempt looked promising for Kotsoiev but Nikiforov managed to escape, but he quickly followed up with a soto makikomi to put the first score on the board in the second bronze medal contest.

In the final thirty seconds, Kotsoiev was relentless in his attacking, uchi mata, sumi gaeshi, sasae, he was giving it all to end the contest before the clock ran down but in the end his initial score brought him his first senior world medal to accompany his cadet and junior world results.

I am very happy I could win the bronze medal today even though I’m a little upset I didn’t make it to the final. I was leading in the semi final but a mistake caused me to lose. I expected to be in the final and felt I could take gold. I felt prepared even though I missed the European championships because of an injury, I studied my opponents and a bronze is what we have. I work so hard and train a lot, I know this isn’t the maximum I can do and I believe I will be in the Olympics to take the medal there.

The final gave Uzbekistan another chance for a gold but Muzaffabek TUROBOYEV (UZB) did not match the conditioning or tactics of Kyle REYES (CAN). The contest went in to golden score with Reyes in the lead as the Uzbek picked up two shidos, and seemingly had nothing left to give, but the support of the crowd kept him on his feet. In an impossible turn of events, Turoboyev stole the win with a close ko soto only one minute in to golden score. This is historical for the host nation, two world titles in the same tournament. Just as the crowd went wild for Davlat BOBONOV yesterday, Turoboyev was equally celebrated.