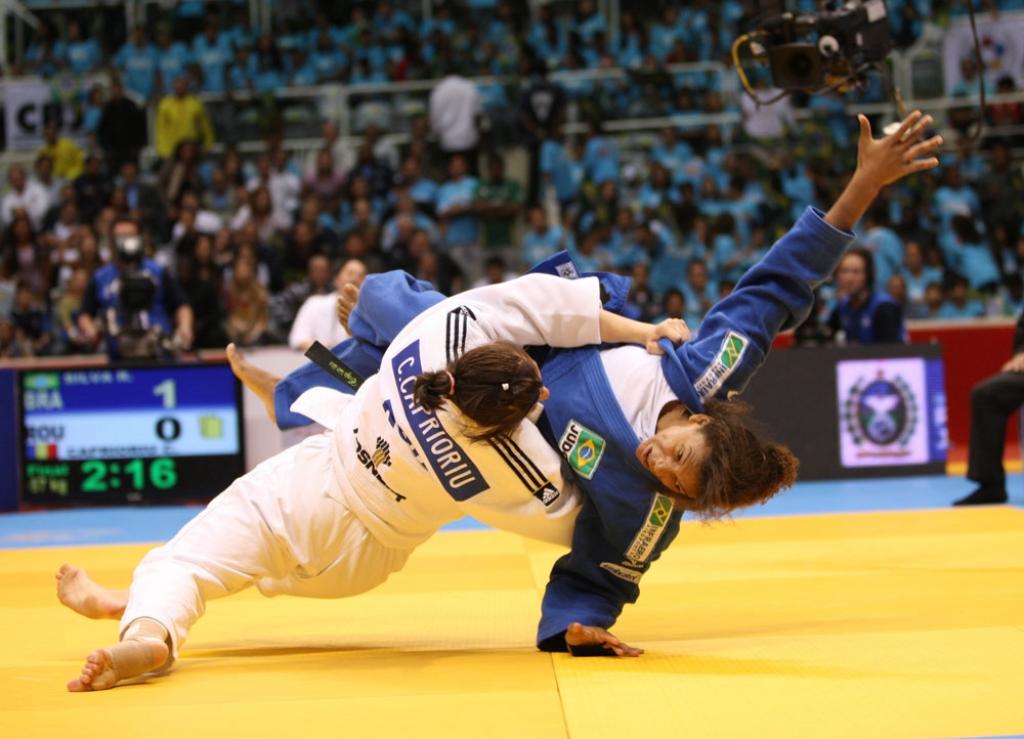 At the IJF Grand Slam in Rio de Janeiro two European fighters won a gold medal. Japan dominated at this level taking four out of seven gold medals. However the cheers of the public went to Rafaela Silva who collected the only Brazilian gold medal in the Maracanazinho Stadium. In front of a numerous young public, she defeated Italian Rosalba Forciniti in the category U52kg.

The first European gold medal on the day was won by Musa Mogushkov. The Russian defeated Spaniard Sugoi Uriarte in a European final U66kg.
The Russian won with a counter attack against Uriarte after a gripping contest of four minutes. It was today’s most European category with three Europeans in the semi final block accompanied by Masashi Ebinuma (JPN).
Uriarte defeated David Larose of France in the semi final in a tactical fight.
Mogushkov was impressive in his semi final against Ebinuma who was thrown by ippon in a few seconds.

The 334 participants came from 55 nations shows how international judo is. Last year 40 nations competed in Brazil, in 2009 25.
Europe’s second gold medal was for Corina Caprioriu in her final against home fighter Rafaela Silva who was expected to win the second Brazilian gold.
Silva was penalized immediately by The Romanian after one small mistake and Caprioriu benefit by ippon. She defeated Automne Pavia (FRA) in the semi final who now won gold, silver and bronze at all three Grand Slams in this year.
Her Olympic rival in France is Morgane Ribout who was again kept on a distance in the World Ranking. For the World Championships later this year in France both can qualify.
Caprioriu was however too good today and is one of the favourites for the world title. Even more than Romania’s frontrunner Alina Dumitru who lost today her first bout against Valentina Moscatt (ITA) in the category U48kg and finished fifth.

The lightweight category was won by Haruna Asami (JPN). She defeated Sarah Menezes from Brazil, a third medal for the home country.
Asami scored a yuko after three minutes.
The semi final was more tough for Asami when she got over Eva Csernoviczki who has a great year so far. After 4 minutes in this fight Csernoviczki seemed to take the lead but Asami stroke with some good old fashioned groundwork and controlled the Hungarian. Young Charline performed great again and won the only medal for Belgium.

Elio Verde won silver for Italy U60kg. Verde keeps on performing but lost his final against Hirofumi Yamamoto. The Japanese needed 92 seconds for his devastating uchimata to score ippon.
In this category dominated by Rishod Sobirov (UZB) now other could take advance. Hiroaki Hiraoka seeded as number three was defeated by Verde in the semi final.
Sofiane Milous (FRA) won bronze after he was defeated by Hirofumi Yamamoto.

Another European silver medal was for French Gevrise Emane (FRA), who doesn’t seemed to be invincible. In this European dominated category now two non-Europeans took the medals. Emane lost to Kana Abe from Japan and Maricet Espinosa showed that she is also capable of mingling for the medals at top level. Europe is warned but has some other assets that were not present in Rio. For instance Urska Zolnir who stayed in her own country to win the European Cup in Celje, has defeated Abe last year in Tokyo.
Emane won this year in Baku and the Grand Slam of Paris as well as the European title and remains one of the favourites to win the World title in France in August.
Elisabeth Willeboordse won bronze in Rio and is on course after her injury.

Brazil enjoyed the only gold medal of the day by Erika Miranda. Miranda controlled the match against Forciniti and won by yuko. A great performance though for the Italian who was ninth at the last World Championships.
Laura Gomez (SPA) and Priscilla Gneto (FRA) won bronze making a total of 18 medal won by Europe. One more, one gold medal, than last year on day 1 in Rio. Musa Mogushkov followed up Alim Gadanov’s title of last year U66kg. Last year the invincible Kaori Matsumoto took gold U57kg.