Europe takes 75% of all world titles 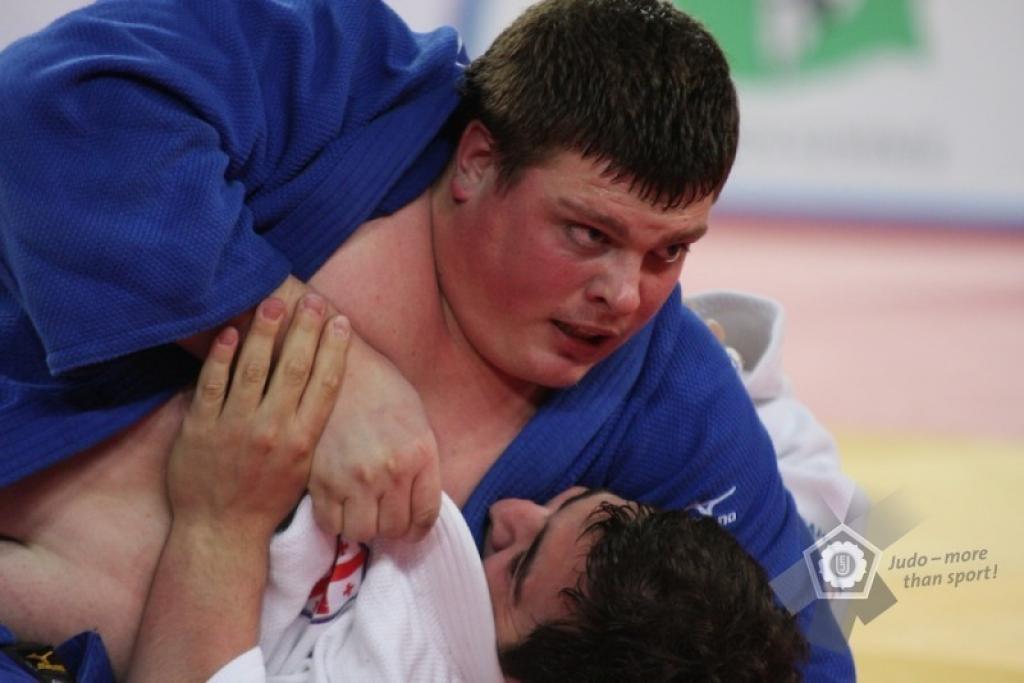 Japan had a good fourth day with two victories in the women’s categories. With these two gold medals Japan kept distance with Russia based on the four silver medals.

However with twelve medals in the previous edition in Cape Town the three titles in Ljubljana is pover. Positive is the distribution over the nations, twelve nations won a gold medal, 11 titles were won by European nations. Russia did good business with three won finals, one more than in 2011, but those were the medals compared to the nine of Cape Town. Anton Krivobokov takes the double for Russia Russian heavyweight Anton Krivobokov claimed the double this year winning both the European and World title. Krivobokov was again in good shape and came out as the winner of his pool where he met two Asians and one Pan American fighter. In the semi final Levani Matiashvili of Georgia was his well know opponent. In 2011 Krivobokov defeated him at the World Juniors in Cape Town and this year it was the European Championships final. Also this time it was the Russian to win. In the final he met with Former double Asian Junior Champion Duurenbayar Ulziibayar and led pretty fast by waza-ari. With all his European experience against strong opponents he felt he would never gave away this lead. Ulziibayar couldn’t get close to Krivobokov who kept control of the match and sealed the victory. After he let the World title to Japan in 2011, and won bronze himself, now the gold was for him. Tomorrow a team match between Russia and Georgia where Levani Matiashvili may be eager to take revenge. The two Georgian candidates for the gold Levani Matiashvili and Giorgi Zakariadze both had to fight for bronze, fortunately in separate bouts. The results was the same though with one medal for Georgia, where they may have counted on more today. Levani Matiashvili defeated Isao Kurahashi after he had lost his semi final against Krivobokov. Earlier Matiashvili defeated Zakariadze in the quarter final and came back in the repechage. Zakariadze came back in his match after Brazilian Silva took the lead with yuko. The Georgian lost his bouts 13 seconds for the end when again Silva broke through and ended with oseikomi for ippon. Japan wins gold U78kg, France and Croatia bronze Shiori Yoshimura won the gold medal in the category for women U78kg. Yoshimura was simply the best today and defeated all her five opponents. Among the challengers strong European fighters such as Karen Stevenson (NED) in the second match and Madeleine Malonga (FRA) in the quarter final. After two minutes in the match Shiori Yoshimura finished her opponent from Brazil by oseikomi and gave Japan its second gold medal of the tournament. The bronze for women U78kg was for Brigita Matic of Croatia who adds an amazing success to her sister’s performance of Friday! She needed 12 seconds to defeat one of the two French in the bronze finals; Samah Camara. Successcoach Vladimir Preradovic couldn’t stop cheering and sister Barbara was amazingly happy for her youngster sister. Both needed a success after some deceptions but two medals at one championship in the family is outstanding. Madeleine Malonga was one of the favourites in advance of the tournament. The French European Champion couldn’t defeat Japanese Shiori Yoshimura in the quarter final and was sent to the repechage which she dealt with well making two victories against Gracner (SLO) and Portuondo (CAN) to take the bronze. Sensational gold for Canada Canadian Kyle Reyes was the surprising winner of the gold medal for men U100kg and claimed the first ever Junior world title for his nation. Reyes was good today, coached by Olympian Nicolas Gill who performed in the same category in his career, Reyes defeated his first four opponents. Asian junior Champion Toktogonov, World and Olympic cadet medallist Marius Piepke, Ryuko Ogawa and triple European junior medallist Toma Nikiforov. In the final Reyes met with Lee-Hyun Kim of Korea. With 80 seconds to go Reyes struck Kim with a huge ippon in a combination of uchimata and tai-otoshi giving Canada finally the success they wanted. Canada was close at day two with Catherine Beauchemin-Pinard, but now Reyes gave his coach gold and took the third place in the medal ranking. Again Canada stunts, just like at the World Cadet Championships with two world titles. The efforts of Nicolas Gill and his team seemed to pay out. Gill had lost a World Junior final himself in 1992, all the previous experiences were gathered in Reyes’ victory. Belgian Toma Nikiforov only used half a minute to smash Kazach Aibek Sarikbayev for ippon. Nikiforov did great today and defeated his first three opponents but had too much difficulties with Kyle Reyes of Canada in the semi final. Japanese heavyweight Ryuko Ogawa defeated Bosnian Slobodan Dorda in his last match for bronze. Dorda was the surprising winner of the pool with strong contenders Sarikbayev, Van Mierlo and Machtrou. Japan wins medal tally, Weiss and Taube shine for Germany Gold was for Nami Inamori who kept the honour high for Japan taking the third gold and the final victory in the medal tally. Inamori defeated German Carolin Weiss. The German heavyweight started off well with three wins against Vaillancourt (CAN), Yerzhanova (KAZ) and Garcia (CUB) in the semi final. Twenty seconds for the end of the match it was Inamori who caught Weiss in oseikomi. Weiss’ compatriot Clarissa Taube won bronze after one minute fighting with the last twenty seconds in a comfortable oseikomi position against Cuban Garcia. Again a medal for German women’s successcoach Claudiu Pusa, four in total and five for Germany. Taube had lost against the Japanese in the quarter final but succeeded to overcome the next two opponents. Ivana Sutalo couldn’t complete the trio that won medals at last year’s European Championships in Porec. She and the Matic sisters won silver, but today she won two matches and lost two, the last against Brazilian super heavyweight Facchiolli who won the bronze. Europe takes 75% of all world titles: 2013: 12 2011: 3 2010: 5 2009: 6 2008: 6 2006: 8 2004: 4 2002: 3 Watch all the photos in our judo gallery: