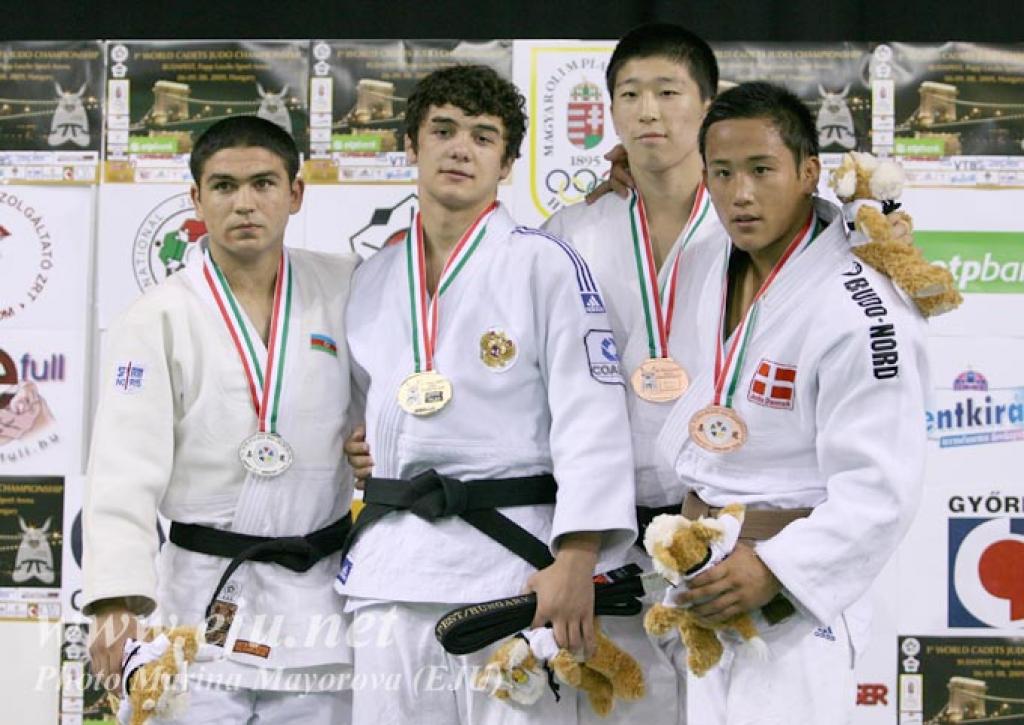 The first World Cadet Championships where a big succcess for the IJF and Hungarian organisation. Beautiful ippons and fascinating finals where fought in the Arena in Budapest. The future of international judo was fighting for a qualification for the First Youth Olympic Games to be held in Singapore in 2010.

Not surprisingly Japan and Russia won the most medals. Russia already showed promissing talents at the U17 Europeans and recent Youth Olympic Festival.
Together with Korea, Brazil and Italy the top five was formed at the medal tally: 11 medals for Japan (with six world champions), 10 for Russia (five gold), 6 for Korea (two gold), 5 for Brazil (one gold), 5 bronze medals for Germany and 3 for Italy (one gold) and also Belgium surprised with a confirmation of their skills at the EYOF.

With 528 participants from 73 countries the first U17 World Championships was a serious event with the best youngsters of the World.

“Also countries which are not in the medal table showed an impressive judo, with nice techniques. We had good surprises like Kuwait, Peru, Venezuela and in Europa Denmark with one bronze medal. It was a very high quality event in terms of technical level and also organization”, says IJF and EJU Sports Director, Mr. Vladimír Bárta.

However referees and coaches aren’t always satisfied as many young judoka are busy with grabbing the pence rather than old fashioned traditional judo. In that respect we can expect a change of the judo rules as grabbing under the belt may be forbidden in the future to prevent that judo is going to look too much like wrestling. Two of the same kind of sports can finally be a threat for one of them as the IOC has many more sports who want to take the place of the current Olympic sports. Also judo must keep evolving, although the quality of the points is great, we should prevent the youth to judo with a negative style.

All medal winning countries are eligible to take part at the Youth Olympic Games, to be held in Singapore in August 2010. According to the rules of the YOC, each nation can be represented maximum by one boy and one girl in the judo competition. The country invitation quota will soon be sent by the IJF to the National Olympic Committees and National Judo Federations. Once received the letter, the countries need to confirm their participation in the event.

There are 104 places to be allocated as follows: two to the host country (one per gender), 64 through World Championships (32 per gender) and 38 universality places (19 per gender). Athletes must be born between 1st January 1993 and 31st December 1994. Four male and four female categories will have competition in Singapore 2010, where also a mixed team event will take place chosen from the participating judoka. Thirteen teams of 8 mixed male and female judoka will enjoy the Olympic spirit fighting eachother with judoka from mixed nations. The teams can’t carry a nation name, but will have a city name of past Olympic host cities.

Male categories are -55kg, -66kg, -81kg, -100kg, while female weights will be -44kg, -52kg, -63kg and -78kg. In these categories Europe only won two gold medals so also European judoka must work hard to keep in line with the competition from the other continents.