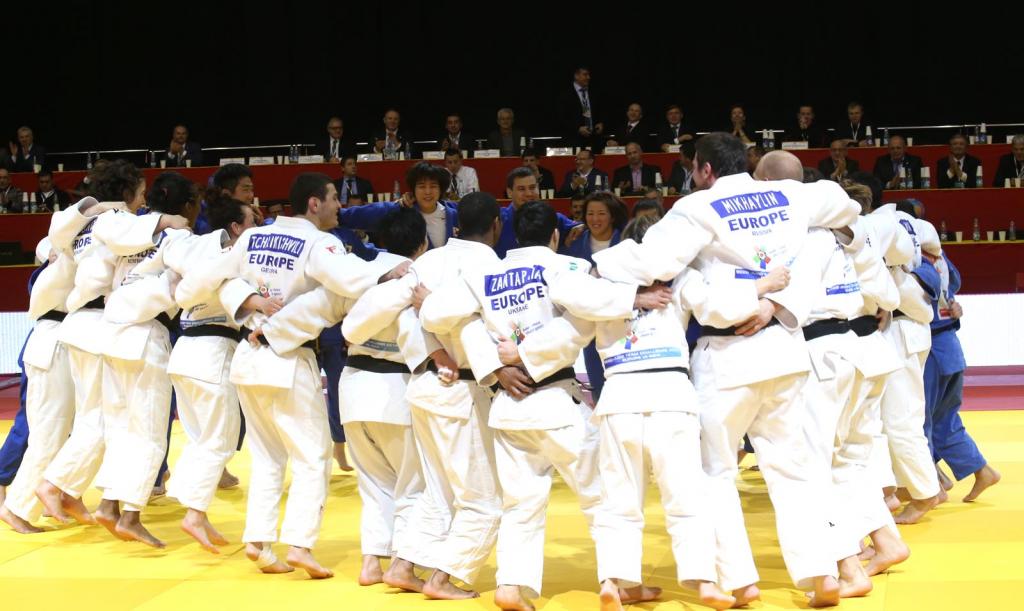 Europe has won the challenge against Asia. In the occasion of the ECCO Judo Team Challenge in Tyumen, the team of Europe defeated Asia by 10-4.

The first successful shot was by Alesya Kuznetsova who defeated World Champion Munkhbat Urantsetseg. A good start for the European team. However it was World Champion Naohisa Takato who made the equalizer against Olympic Champion Arsen Galstyan. Nakato remained undefeated but is not ready yet to attend the Grand Slam of Paris. It was Roumania’s Andrea Chitu who realized another surprise win for Europe against Yuki Hashimoto. Leading 2-1, Georgii Zantaraia extended the lead by 3-1. A comfortable lead Europe may not have expected in the early stage of this battle among the two best continents. Telma Monteiro scored 4-1 with a great ippon against Sumiya Dorjsuren and the gap started to increase dramatically for Asia. Dex Elmont added another victory when he overcame Khashbaatar Tsagaanbaatar in the category U73kg. They hadn’t fought eachother for 7 years but this time it was Elmont showing he was fit enough to beat the 2009 World Champion. Kana Abe got her revenge against Anicka van Emden who beat the Japanese at the World bronze medal bout and scored 5-2 for Asia. With Avtandil Tchrikishvili Europe could secure a big lead but it was the surprising Yakhyo Imamov who caught the World Ranking leader another time. Last year in Paris he did the same and took the victory at the Grand Slam in Paris. Laura Vargas-Koch needed all efforts to overcome the strong Korean Kim U70kg. Kim who caught Vargas-Koch with a bear hug which didn’t bring the ippon to Asia but a penalty to Kim. It secured Europe’s sixth victory in this challenge. The world’s silver medallist in Rio Varlam Liparteliani dominated in his match U90kg against Kyu-Won Lee and gave Europe the 7th win, what more could happen to the team. Gyeong-Mi Jeong defeated Abigel Joo with a small difference so that Henk Grol could make the final score. Although he hadn’t fought in a competition since September, he could overcome Soyib Kurbonov U100kg and took the 8th and decisive victory for Europe. The team already celebrated the victory while Lucija Polavder had to fight against Korean Lee Jung-Eun. The Slovenia won her match and Alexander Mikhaylin (34) could resist youngster Yuri Krakovetskii in the final fight. Although gave a good effort it was the Russian who benefit of his height and claimed the final score to 10-4 for Europe. It was a unique event attended by many VIPs and broadcasted live in many countries. The team managers Ezio Gamba (Europe) and Armen Bagdasarov (Asia) saw the two teams on the tatami celebrating a unique team spirit together where World and Olympic Champions and leaders of the world ranking battled in the Judo Arena in Tyumen. Watch all photos at the EJU gallery.

During the opening ceremony the Governor of Tyumen region, Mr. Vladimir YAKUSHEV, said: “I’m pleased to welcome you here to see the world’s greatest athletes compete. Tyumen has become the centre of judo competitions. I want to thank Sergey Soloveychik for the right to host this event and I hope that all the judo fans will remember not only the competition but also the city of Tyumen.” Mr. Sergey SOLOVEYCHIK, EJU President and IJF Vice President, said: “Dear friends, today we shall witness a new sporting event, we shall the winners of Olympic Games and the world championships in action. I thank the Governor of the Tyumen region for his support and our sponsors ECCO. Let the judo spirit win today.” Mr. Mikhail SERVYAN, Vice President of title sponsors ECCO, said: “Good evening dear friends, I would like to thank the government of the Tyumen region and everyone who helped to host the event. As a representative of ECCO company he said: “I am proud and honoured to be here and be part of such a great event. I think we will see many more editions of this tournament. I wish good luck to all of the participants and I hope you enjoy.”