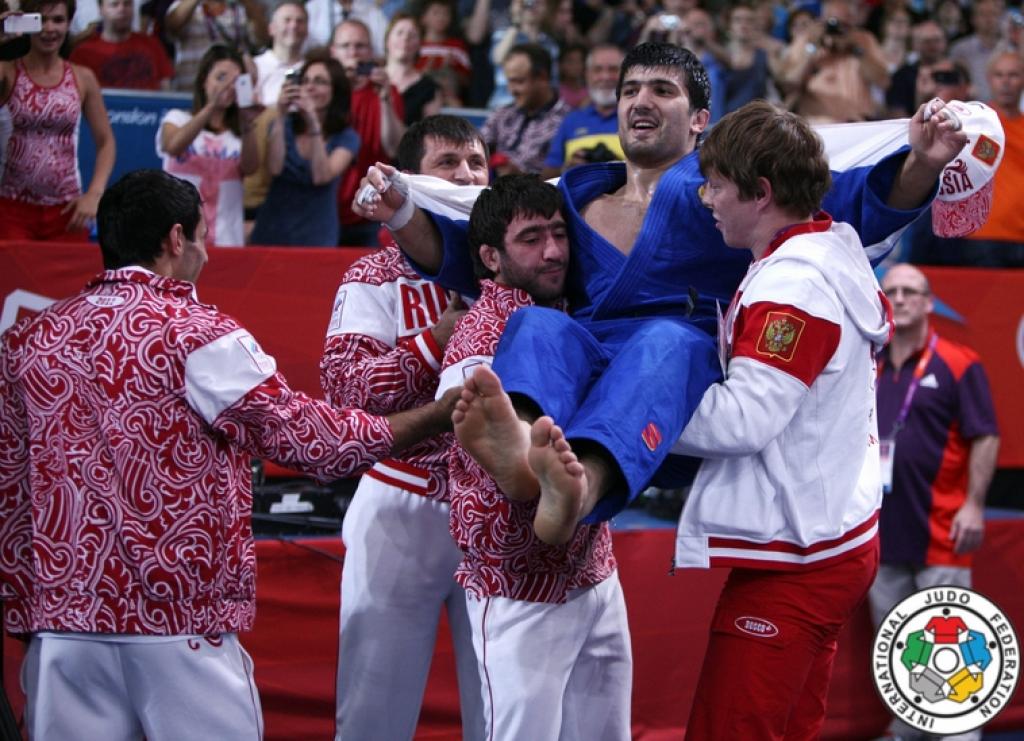 Under the watchful eyes of Russian president Vladimir Putin, Khaibulaev needed only 2 minutes 14 seconds to ovecome Naidan in the final. When Naidan, who was affected by an injury suffered in the semi-final, tried to attack, Khaibulaev counter-attacked using a shoulder drop to fell the Mongolian and to score ippon.

Khaibulaev advanced to the final over Dimitri Peters (GER) only by a judges’ decision as there was no score in the regular and extra match time.

The bronze medals went to Henk Grol (NED) and Dimitri Peters, the surprising German on stage. In total three medals in the division for Europe making Europe’s share even bigger than 50% after six days.

Top seed Maxim Rakov (KAZ) went out in the first round against Elmar Gasimov (AZE) and Takamasa Anai (JPN) lost to Lukas Krpalek (CZE) in the round of 16, making this another gloomy day for the Japanese judo team.

Women
In the women’s category U78kg Britain’s Gemma Gibbons was the talk of the town after her unexpected silver medal today, the first since 2000 for Great Britain since Kate Howey, her current coach struck silver in Sydney in 2000 in the -70kg.
Read more about this in our interview with Gemma in our news section.

Her performance was witnessed by British Prime Minister David Cameron.

Kayla Harrison won the USA’s first judo gold medal at an Olympic Games when she beat Gibbons. She dominated the final, scoring a yuko point in the first minute and a second in the last minute to win. The silver for Gibbons was Great Britain’s first Olympic judo medal.

On her way to the final Harrison defeated all her opponents by ippon, including world No.1 Mayra Aguiar(BRA) in the semifinal and European champion Abigel Joo (HUN) in the quarterfinal, who got injured in her match with Harrison and couldn’t do much anymore, but did defeat Polish Pogorzelec with a devastating ippon.

Gibbon’s performance was the biggest surprise of the day. The 25-year-old ranks 42nd in the world and qualified as a host NOC entry but, urged on by a vociferous home crowd, she beat the world champion Audrey Tcheumeo (FRA) in the semifinal in the golden score extra-time with a smashing point.

World Champion completed Europe’s success and claimed the bronze against Joo. Aguiar defeated Marhinde Verkerk of the Netherlands for bronze.
2008 Olympic champion YANG Xiulu (CHN) went out in the repechage round, beaten by Verkerk.

There was again no medal for Japan, with second seed Akari Ogata losing in the round of 16 and Anai losing his second match against Czech sensation Krpalek.

Read all quotes of the athetes in our blog in our community.
http://community.eju.net/judofriends/judo_blogs