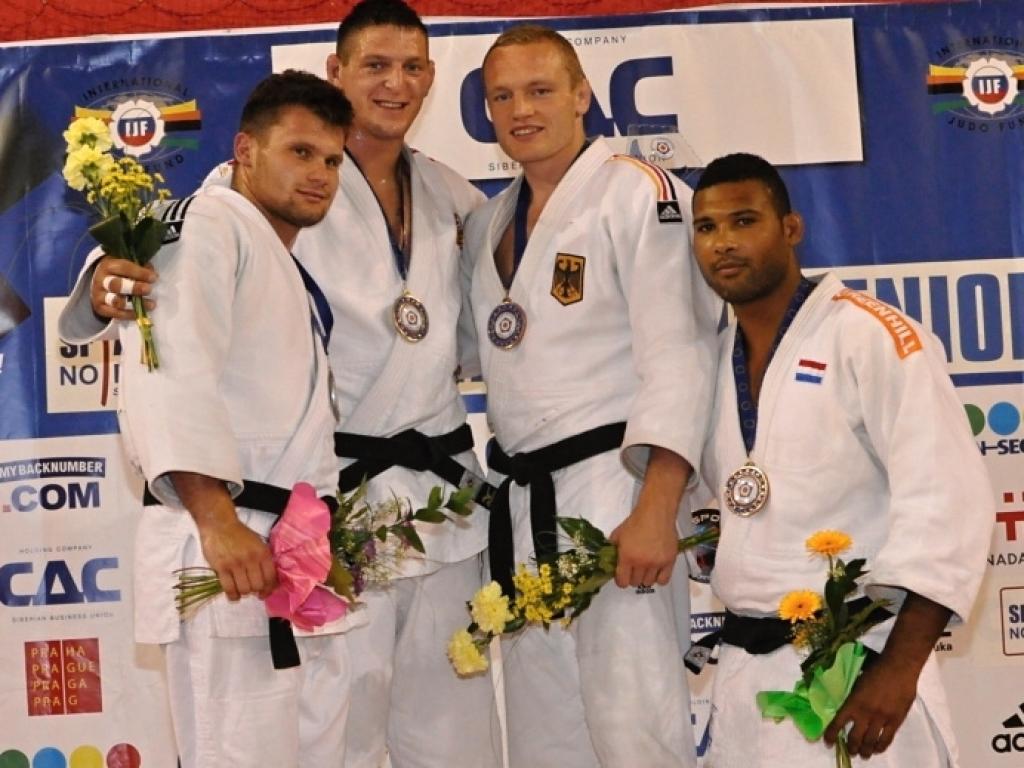 Even after the withdrawal of Grol and Rakov from the competition the road to gold was not easy for Lukas Krpalek in the men’s U100kg. James Austin (GBR) scored yuko against him but Krpalek managed to pin him. Then he met Dimitri Peters of Germany who has always beaten Krpalek so far. Peters scored waza-ari against Krpalek with uchi-mata but received three penalties. At the end Krpalek decided the match in the very last second with a beautiful harai-goshi. In the final Krpalek met Viktor Demyanenko (UKR) and launched several good attacks in ne-waza. Eventually he made Demyanenko tap his strong hold down. The Czech fans hope that the same flag in the same positions will be behind the podium on August 2nd in the London Excel.

Kayla Harrison (USA) has proved her qualities and won the tournament U78kg in style. But Kerstin Thiele of Germany was a very tough opponent. Harrison won this match by a split decision. “I have never fought her before”, Kayla said, “ and I knew that she would be extremely strong. She even managed to escape from my pin. But I won and this victory is an important one for me.” In the final Harrison threw Heide Wollert of Germany with an uchi-mata for ippon. But the referees had to consult the video before their final announcement. “I knew I had thrown her” Kayla said “but I was prepared to continue if the call had been canceled. I moved very well in the final and felt very confident. I would like to thank to the Czech organisers for an excellent organisation of this tournament. The good and in-time organisation always helps me to concentrate on my judo. I am looking forward to the training camp next week. I will surely be competing in Prague again”.

Laszlo Csoknyai of Hungary scored several nice ippons throughout the day. He defeated Burton in quarterfinal and threw Sven Maresch (GER) for ippon in the semi final. In the U81kg final he met Robert Gess of Germany who defeated the reigning Olympic champion Ole Bischof in the preliminaries and threw Matus Milichovsky of Slovakia with a beautiful ippon in the semi final. Csoknyai was more active in the final which he won by penalties.
Detlef Ultsch, head coach of the German team, commented the performance of Bischof: “This tournament was only a preparation. We came here right from a training camp and Ole has not made any peaking up. I do not care if Ole wins or loses here. The Olympic tournament is what really matters. In London his form will culminate. I am sure that he will perform well in London.”
Detlef Ultsch was surely happy with the performance of Andreas Toelzer who won the +100kg category.

Krisztian Toth is only 18 years young and has moved to the U90kg category recently. On his way to the gold he defeated former European champion Marcus Nyman of Sweden and in the final he defeated the experienced Roberto Meloni of Italy by penalties. Toth did not have a chance to qualify for Olympics as he was only 16 when the qualification for London started. But perhaps Prague saw a potential medal winner for Rio 2016?

After the withdrawal of Edith Bosh Katarzyna Klys of Poland won the gold in U70kg. Both have fought the European Championships final and Bosch was happy with her matches in the road to the final.
Gulzhan Issanova of Kazakstan countered Tessie Savelkouls of Holand for ippon in the +78 kg final and won the tournament.

The EJU training camp starts tomorrow. Some 400 athletes including the Georgian Olympic team will be getting ready for the tournaments to come.