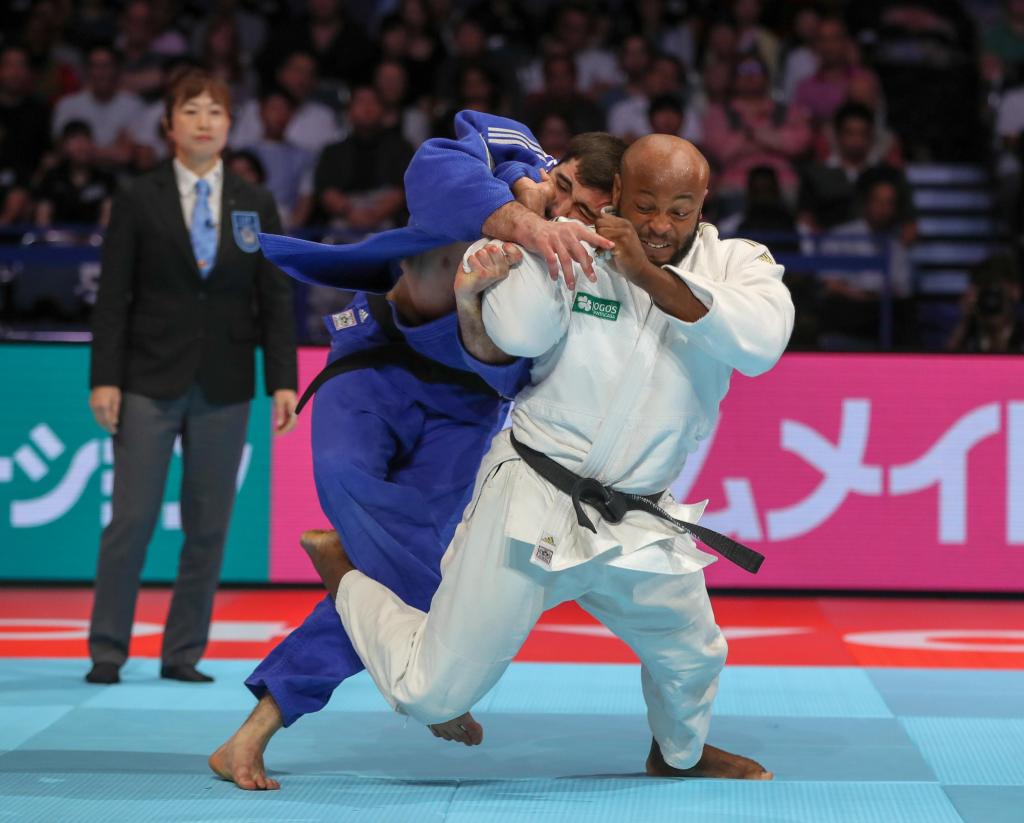 Going in to the final block, Europe was guaranteed a finalist, either Jorge FONSECA (POR) or Elmar GASIMOV (AZE) would take that spot. Both had come through the top half of the draw taking out European Champions and medallists, FONSECA putting an end to the World Championship gold dream for #1 seed, Varlam LIPARTELIANI (GEO) in the quarter final and GASIMOV saw out the Dutch #4 seed, Michael KORREL.

The first of the semi final contests was between the current World Champion, CHO Guham (KOR) and European and Russian representative, 2018 World bronze medallist, Niyaz IlYASOV. The Russians speedy ashi waza had led him to the semi final but ashi waza is not what took him to the gold medal contest, persistance was the key to his success.

After fighting for just shy of ten minutes, both athletes were exhausted and the contest was decided on penalties, the final one awarded to CHO for stepping out of the area to avoid an attack from ILYASOV. Already because of the little time to recover, it was clear that there could be a chance ILYASOV would not perform to the best of his abilities.

Next up was FONSECA’s semi final against GASIMOV. The signature seoi nage from FONSECA wasn’t working and so doubled up this attacks with a stretched out o soto, catching the leg of the Azeri and despite GASIMOV putting all of his efforts in to spinning out, the Portuguese scored waza ari with only a few seconds left on the clock.

Gasimov is very very strong fighter but I work hard to play with them but my goal is to be Olympic Champion.

ILYASOV and FONSECA had never fought before this World Championship final, so bets were off as to who would walk away as Champion.

The Portuguese scored waza ari 54 seconds in to the fight and did well to hold off the ILYASOV whilst trying to go for the second score, but the longer the contest continued, the more motivated the Russian became and if not for his instant reaction, FONSECA would have lost the contest. A weak o soto gari attack was put in by FONSECA and ILYASOV saw this opportunity to counter him, though he didnt react quick enough to make it a score.

FONSECA’s coach, Pedro SOARES was very animated in the chair, pleading with his athlete to calm down and stay strong.

I scored early but after that I got anxious and started making mistakes but my coach was screaming ta me to stop and control things, that I was leading.

Fortunately for the Portuguese team, he did just that and as the clock ran down, Team Portugal realised they had a gold medal to add to Barbara TIMO’s silver in the -70kg and they were elated.

Not only is this a huge achievement for FONSECA and the Portuguese team in general, but for this -100kg athlete, perhaps even more special. Prior to the Rio de Janeiro Olympic Games, he had become ill with a type of cancer which greatly affected him which was only noticed due to a hernia which was being operated on. Though he suffered, his strong personality and will pulled him out the other side, but after chemotherapy, he had lost much weight but still continued to train. Due to this, every little thing means so much more to him, coming back on to the circuit, to full health after tumour removal, chemo and radiotherapy, becoming a World Champion is an incredible feat and a great inspiration.

Europe managed to put three athletes on the podium in the -100kg category, the bronze medal winner in the end was KORREL. This medal had escaped the Dutchman for the past two years, losing out in the repechage and the bronze medal contests in Budapest and Baku, so he was ready to take it today.

I’m becoming older, getting more experienced at the high level at Grand Prix and Grand Slams but you know it’s not about those anymore it’s about these kinds of events, Worlds, Europeans and I lost in the Europeans and it gave me fire to get better for the up coming tournament.

As the crowd welcomed in the first contest between KORREL and CHO, there was no prediction as to who would come out on top, both athletes very strong, then KORREL put the first score on the board using a seoi nage attack.

It was a quick score, then I thought, okay now we’re going to do some kumi kata, you love it, I love it and I managed to win the medal, I’m just really happy.

KORREL’s repechage against LIPARTELIANI was also unpredictable, the first minute was a battle for the grips as both athletes know each other well and neither wanted to give up the bronze medal opportunity on the Japanese stage. Unfortunately for the Georgian he didn’t seem his usual, combative self and the win went to the Dutch following a seoi nage, transitioning quickly in to osaekomi.

I’d never beaten him before, but he was a little bit off and I just had to give it my all, I told myself only two more matches to go and I managed to score at the end and worked on the ground then it was finished.

In the -78kg category for women, Madeleine MALONGA (FRA) stole the show for the European continent. Though we had two semi-finalists, Klara APOTEKAR (SLO) was the other, the French managed to take the gold medal.

MALONGA dominated the top half of the draw, the Paris Grand Slam Champion beating out World bronze medallist, Natalie Powell (GBR) for her place in the semi final. Unfortunately POWELL couldn’t return from this loss in the repechage, giving Loriana KUKA (KOS) a place for bronze.

The French athlete fought the WRL #1 and Rio de Janeiro Olympic Games bronze medallist, Mayra AGUIAR (BRA) in her semi final which seemed relatively even until MALONGA used her incredible strength to counter the Brazilian with just over a minute left on the clock. This would be the third final for the French women in three days following the success of Clarisse AGBEGNENOU and Marie Eve GAHIE.

The prize for a successful day was a gold medal contest against the reigning World Champion and home favourite, HAMADA Shori (JPN). This did not seem to daunt the French athlete, scoring against her in the first half of the contest and finishing off with a huge o soto technique, becoming the World Champion of 2019 in Tokyo, and earning a third title for the French women and dethroning yet another Japanese World Champion in Tokyo.

The first of the bronze medal contests was between KUKA and APOTEKAR. The pair shared the podium in the European Games this year, with the Slovenian taking gold and KUKA the bronze. Keen to add a World medal to their collection, this fight was particularly intense.

KUKA’s success following the repechage contest against POWELL clearly motivated her enough to really dig deep and pull out a win and third bronze medal for Kosovo. A counter attack in just over two minutes of contest put a waza ari on the board and later, an arm lock caused APOTEKAR to submit.

This was a feeling like no other for KUKA, making it the third bronze medal for Kosovo in these Championships,

I am so happy, at the beginning of the day I didn’t think I would win a medal but then a road opened for me and I didn’t stop until the end. [After the submission] it was crazy, I didn’t know what was happening and I’m very happy.

KUKA referenced her coach and team as the reason behind her success, stating that, as her bronze medal team mates, Distria KRASNIQI and Majlinda KELMENDI would agree, their coach, Driton dedicates his life to judo, to helping them find solutions to become better judoka. 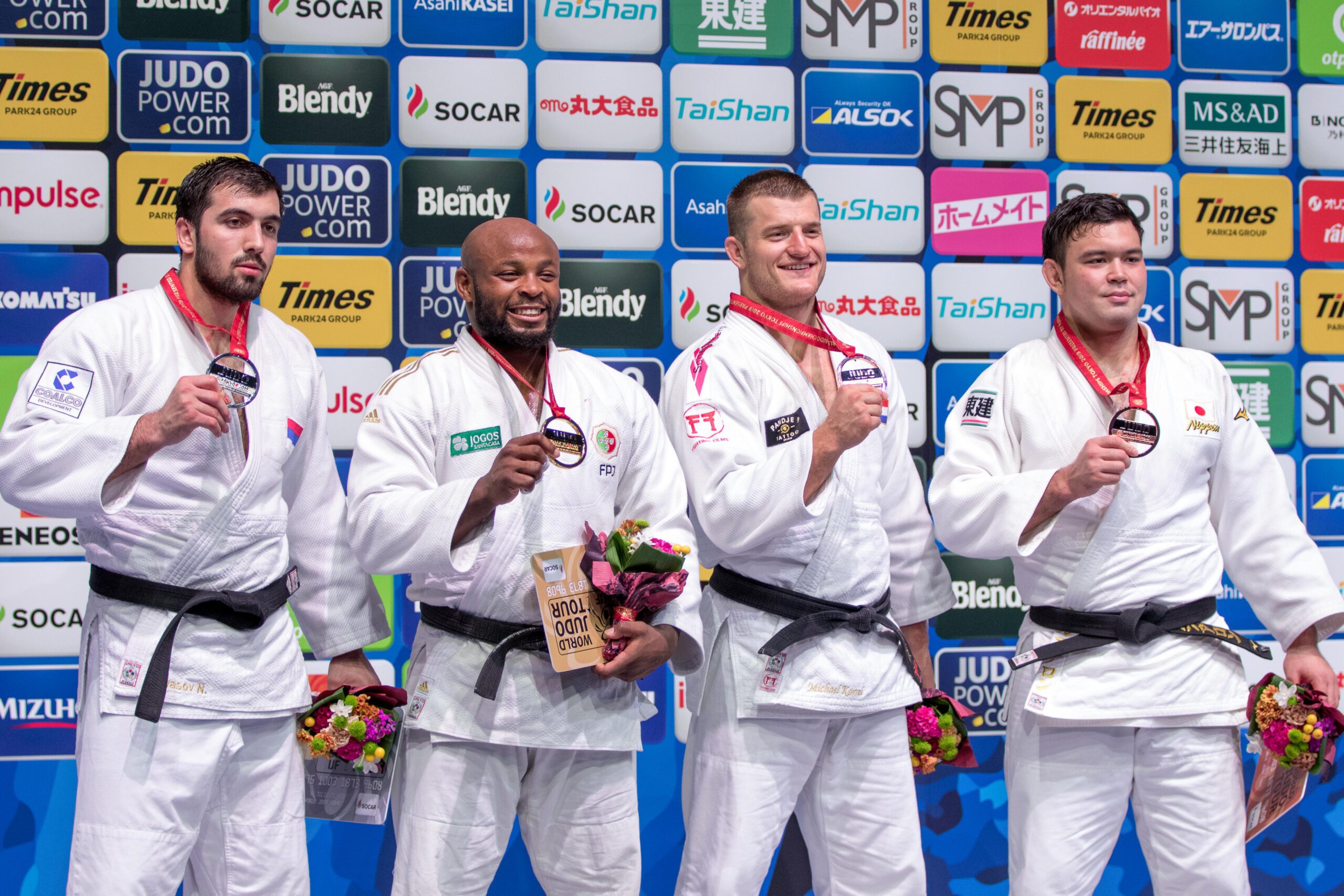 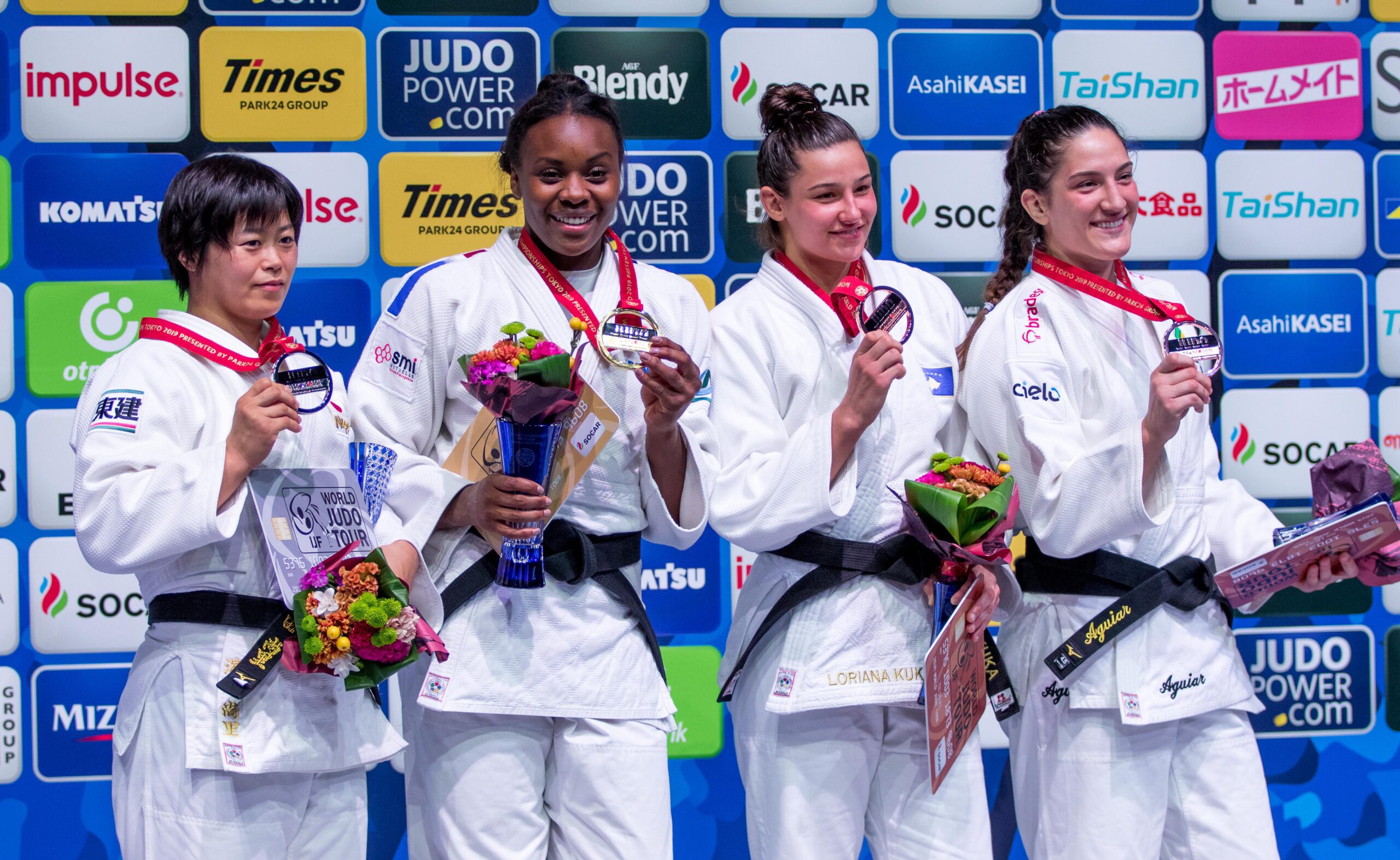 The final day of individual competition for the +78kg and +100kg categories will start at 12pm local time and the live streaming can be found at live.ijf.org.