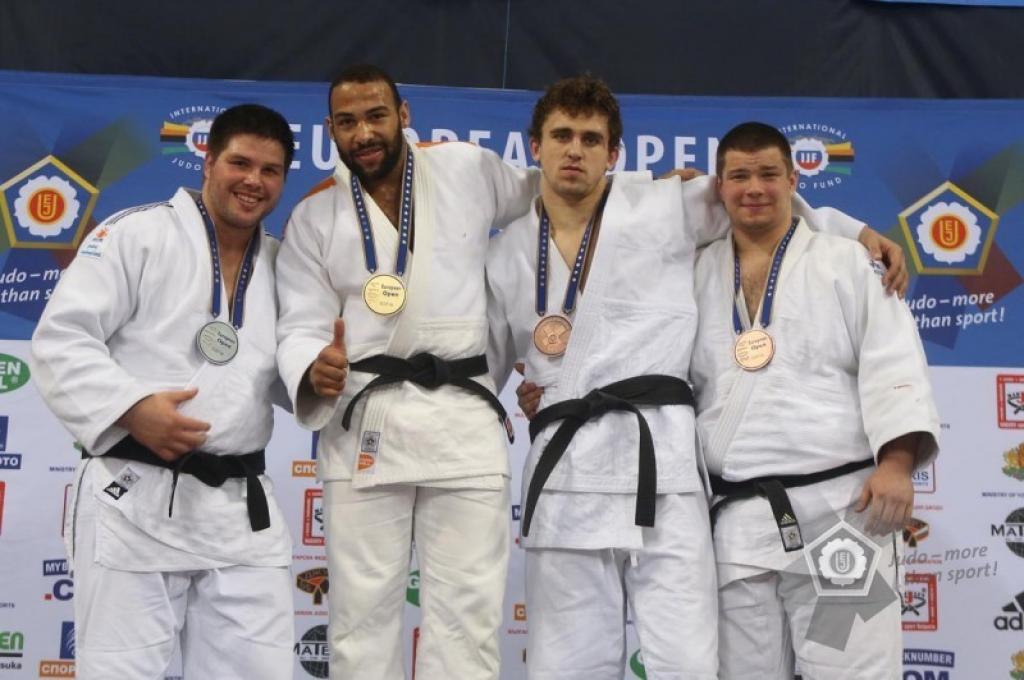 It was held for both men and women for the first time since 2002. The Netherlands won seven medals and one gold, the Ukraine even nine medals. Eleven nations won a gold medal. The Israelian team have competitive judoka in almost all categories. On Sunday it was Alon Sasson who added a second title to the list of medals. In the final U90kg he was able to beat Aleksandar Kukolj (SRB). On Saturday Golan Pollack won gold U66kg for Israel. In the category U81kg it was an all Hungarian final. Szabolcs Kriszan won his bout against Laszlo Csoknyai. Ilya Kokovich (RUS) finished third as well as Alexios Ntanatsidis who defeated his countryman Roman Moustopoulos for bronze. The Ukraine won its first and only gold medal U100kg where Mykhailo Cherkasov defeated Flavio Orlik of Switzerland in the final. Local judoka Daniel Dichev finished third as well as a second judoka from the Ukraine Dmytro Berezhnyi. The heavyweight title was for Holland. Roy Meyer was able to defeat European medallist Barna Bor in the last final of the day. It was the first victory for Meyer at this European Open level. Barna Bor won the European junior title in Sofia 10 years ago. The Ukraine took both bronze medals. In the women’s category U70kg Gevrise Emane is back on track. The double World Champion U70 and U63kg has now moved back to U70 and won her first event. Since Decosse retired and Agbegnenou is successful in the U63kg category, the path is open for Emane to make her return in this category. However she will face some opposition of Margaux Pinot, Fanny Posvite and Lucie Perrot. This World Cup victory will get her back in the World Ranking soon. On Sunday in Sofia Emane defeated Szaundra Diedrich in the final. The German won her first medal at senior level in Europe. The number three of the Junior World Championships in Ljublana defeated three senior opponents, but couldn’t hold the experienced Emane. The French defeated European U23 Champion Roxane Taeymans in the semi final. The Belgian lost her last fight against Giulia Cantoni of Italy. The Italians are improving in this category with Valeria Ferrari who bronze and Jennifer Pitzanti who finished fifth. The Italians did well in the U78kg category as well. This time they took gold by Assunta Galeone who overcame Iris Lemmen of The Netherlands. Galeone won her third ever World Cup event but all the time she was in the final, she won. Lemmen who won last year in Lisbon, defeated two opponents in Firdevs Toprak and Guusje Steenhuis, her Dutch rival. Although this category is full with Dutch women. Karen Stevenson won bronze, Steenhuis finished fifth and vice World Champion Marhinde Verkerk is waiting at home to give her best in Paris. Anastasiya Turchyn of the Ukraine won the bronze against Steenhuis, just like at the European U23s. Galeane is ready for the European Open in Rome in two weeks time. The women’s heavyweight category was claimed by Carolin Weiss. The strong German beat Vanessa Zambotti, a legend in Mexico. Tessie Savelkouls (NED) and Galyna Tarasova (UKR) both won bronze. Some of the athletes will participate next week in Paris as well in the Grand Slam. Sofia was useful practice and motivation in the beginning of this year. Next stop for many: Rome and for men: Oberwart. Watch all pictures of this weekend in our gallery: