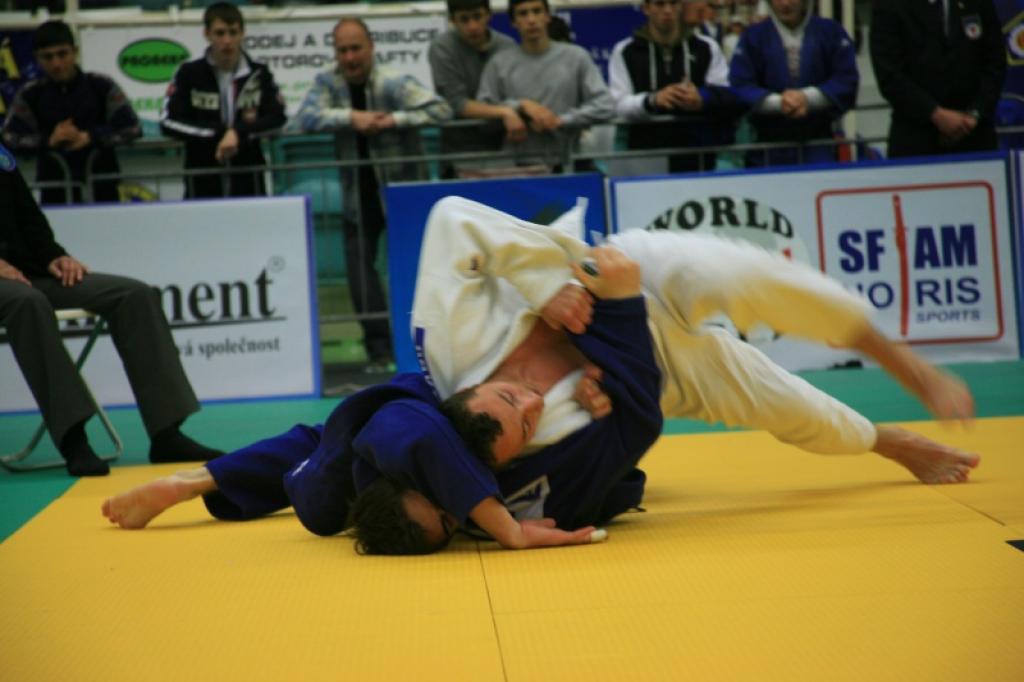 536 athletes from 27 countries entered into the Cadet European Cup held in Teplice, Czech Republic, at this beautiful sunny spring weekend.
The crowd watched beautiful judo performed by 15 and 16 year old judoka.
40 kg: Damyanova of Bulgaria won her semifinal fight by a superb ko uchi gari and proved her form in the final which she won by waza ari (seoi nage) and two yuko.
50 kg: Kelikhashvili of Gergia performed very nicu judo during the whole day and threw Lang of Austria for a beautiful ippon in the final. He also received the ippon trophy for Saturday. Lang however fought very well and he seems to be a perspective successor of L. Paisher.
44 kg: Batizi of Hungary managed to win the final by waza-ari with seoi nage. Also in her semifinal match she scored waza-ari with seoi nage and then followed into Kami shiho gatame to score the second waza-ari.
55 kg: The final in this category was a breathtaking match. Basile of Italy showed more activity and won the fight with tomoe-nage in the golden score match. Basile was unstoppable today and scored several ippons with various techniques. The semifinal won by ippon with uchi-mata. He performed classical judo and was able to score with many techniques. He is a great hope of Italian judo.
48 kg: The final match was quite even but Pfeiffer of Germany managed to score yuko with uchi mata. Her Belgian opponent lost a good chance for osae komi some 5 seconds before the end of the match so the gold went to Germany. But Pfeiffer fully deserved the gold. She won her semifinal match with Kami shiho gatame.
60 kg: Safarli of Azerbaj scored winning waza-ari in his semifinal fight some 13 seconds before the end. Also the final was pretty hard for him but he was more active and because his opponent was penalized twice he won the gold. The second semifinal ended up with hansoku make for Ramihli of Azerbajzan for kawazu-gake.
52 kg: Coban of Germany won her final fight in a couple of seconds with uch mata sukashi. She won her semifinal match by waza-ari and was awarded the ippon trophy at the end of the day.
66 kg: This category was dominated by Georgian athletes. Both of them won their semifinal matches before the time limit. In the beautiful final both athletes showed attacking judo and both of them scored. Kavtaradze managed to score waza-ari with ippon seoin nage while his opponent scored yuko only. However Kavtaradze finally scored ippon with another seoi-nage. It is a pitty that the ippon trophy could go to one athlete only. Kavtaradze would deserve it as well.