Europeans dominate 3rd day of the World U18 Championships 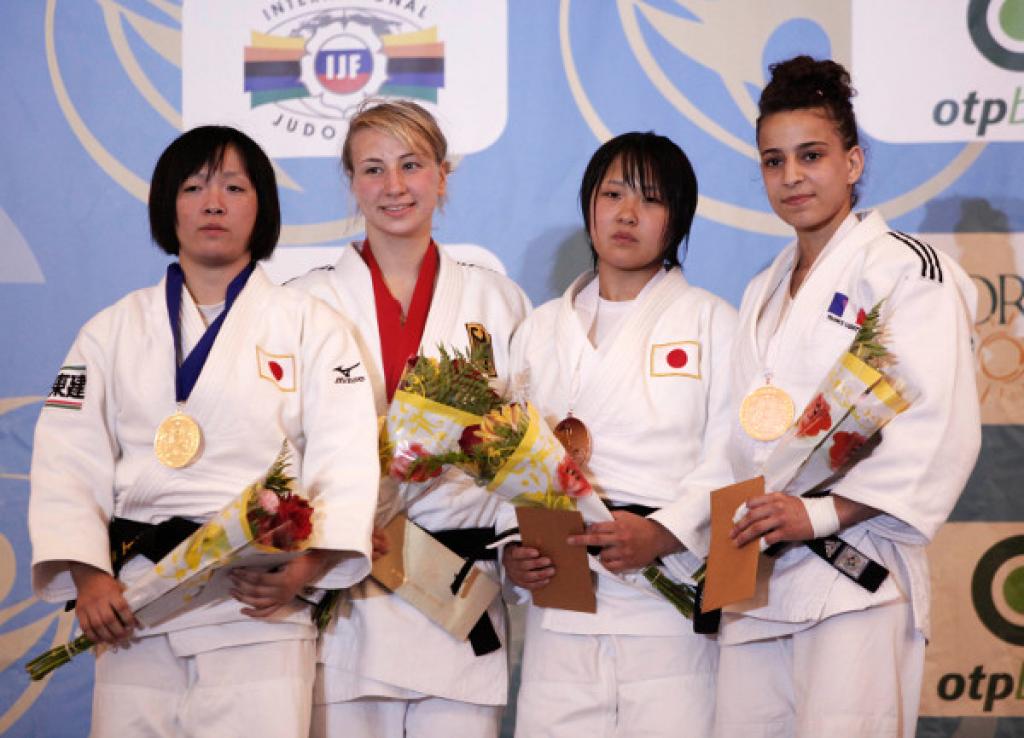 The 2013 Cadet World Championships gathered pace on day three as four champions were crowned on Saturday during a pulsating day of judo at the Doral Legends Ballroom.

Four categories were in action as the girls -57kg and -63kg talents took to the tatami along with the boys -73kg and -81kg categories.

The Netherlands came to the fore as they won two medals while Russia won the same amount and table-topping Japan continued to prosper with two medals of their own.

Five-time Cadet European Cup medallist Zaur RAMAZANOV (RUS) ruled for Russia in a fascinating contest against European Youth Olympic Festival bronze medallist Tamazi KIRAKOZASHVILI (GEO). The evenly matched rivals could not be separated after four minutes of high-quality action and they entered golden score after trading shido penalties for passivity in the final minute of regulation time. In golden score KIRAKOZASHVILI was awarded a yuko but that was correctly wiped off and the contest continued with RAMAZANOV pressing forward with purpose. The Russian rallied and utilised his strength to throw KIRAKOZASHVILI with a picturesque uchi-mata for ippon. KIRAKOZASHVILI booked his place in the final by osaekomi-waza by holding down Cadet European champion and top seed Ruslan GODIZOV (RUS) with a kesa-gatame for ippon in the semi-final. RAMAZANOV wasted no time in his semi-final as he swept past Cadet European Championship and European Youth Olympic Festival bronze medallist Arso MILIC (MNE) by ippon in 59 seconds.

The first bronze medal was won by MILIC who toppled Dutch National Cadet Championship winner Kevin BAKKER (NED). The Dutchman received a shido for passivity and his inactivity encouraged MILIC who showed lethal efficiency as he powered past BAKKER by flooring him with an ouchi-gari for ippon. The second bronze medal went to GODIZOV who bested Pitesti Cadet European Cup bronze medallist Lovro KOVAC (CRO). The Croatian was unwilling to attack and received a shido for passivity. After a second shido for the same infringement GODIZOV seized the moment as he threw the Croatian with his favoured uchi-mata for a waza-ari. GODIZO, who was visibly in pain with a back injury from the earlier rounds, showed his mettle as he held firm to capture the bronze medal.

History was also made in the -73kg category today as Togo participated for the first time in the history of the event. Ekoue Kevin AMEWOUI EKOUE ADJOKA (TOG) showed remarkable composure given the occasion as he stormed past Adrien VALERE (MRI) in 32 seconds by ippon before bowing out of the competition in the next round.

Junior Canadian Championships silver medallist Louis KRIEBER GAGNON (CAN) conquered Cadet European Championship and European Youth Olympic Festival bronze medallist Frank DE WIT (NED) and with the spoils came a place in the history books. Canada’s first male Cadet World Championship winner went ahead with a waza-ari and accumulated two shido penalties for passivity while his opponent received one for same offence. DE WIT had won his four previous contests by ippon and gave his all in a sensational contest which saw the budding stars go toe-to-toe for the full four minutes. The Dutchman had to show his resolve in the preliminary rounds after going a waza-ari behind against Ivan Felipe SILVA MORALES (CUB) but responded with immediate effect as he held down his rival with sangaku-gatame for ippon.

The first bronze medal was presented to 2011 Cadet World Championships winner Mikhail IGOLNIKOV (RUS) who defeated teammate and Bielsko Cadet European Cup winner Turpal TEPKAEV (RUS). The explosive IGOLNIKOV, who won gold in the -66kg category, abruptly ended the campaign of KUGIMARU Shota (JPN) with a monumental uchi-mata in the preliminary round in one of the throws of the day. In the final he utilised osaekomi-waza to pin down TEPKAEV with a mune-gatame which led to ippon. The second bronze medal was awarded to Berlin Cadet European Cup bronze medallist Marko BUBANJA (AUT) who overcome the challenge of Zagreb Cadet European Cup winner Idan VARDI (ISR) at the halfway mark. BUBANJA used ashi-waza to force his opponent off balance and stayed close to the Israeli judoka to hold him down with a mune-gatame from which there was no escape.

Teplice Cadet European Cup winner Jennifer SCHWILLE (GER) ensured Germany’s first medal of the competition would be gold with victory in the -57kg final against MURAKAMI Kanna (JPN). After MURAKAMI edged ahead with a yuko the German youngster replied with an osoto-otoshi for waza-ari. The Japanese judoka searched for an opening but SCHILLE was quick to react and countered with an osoto-gari for a second waza-ari which sealed wazari-awasette-ippon. MURAKAMI had bested Cadet European Championship bronze medallist Gaby DE BY (NED) with a yuko from o-goshi in the semi-final. At the same stage SCHWILLE humbled Cadet European Championship bronze medallist Sarah HARACHI (FRA) as she come back from a yuko deficit to throw the French judoka with an uchi-mata for ippon with a minute left.

The first bronze medal went to TATSUKAWA Rina (JPN) who bested DE BY. The Japanese hope received a shido for not taking a grip after 30 seconds of action but that penalty spurred her on as she pinned DE BY to the tatami with a mune-gatame and switched her position to sit through for a kesa-gatame for ippon. The second bronze medal was won by HARACHI against Gabriela BITENCOURT (BRA). HARACHI won France’s first medal of the competition as she registered a waza-ari and that proved enough for bronze.

Cadet European champion and European Youth Olympic Festival silver medallist Szabina GERCSAK (HUN) delivered on the world stage as she bested Bielsko Cadet European Cup bronze medallist Ines PREVOT (FRA) in the -63kg final. GERCSAK was penalised with a shido for passivity after 30 seconds but the tide turned at that point as the Hungarian gradually took control of the contest and floored PREVOT with a tani-otoshi after 73 seconds for ippon.