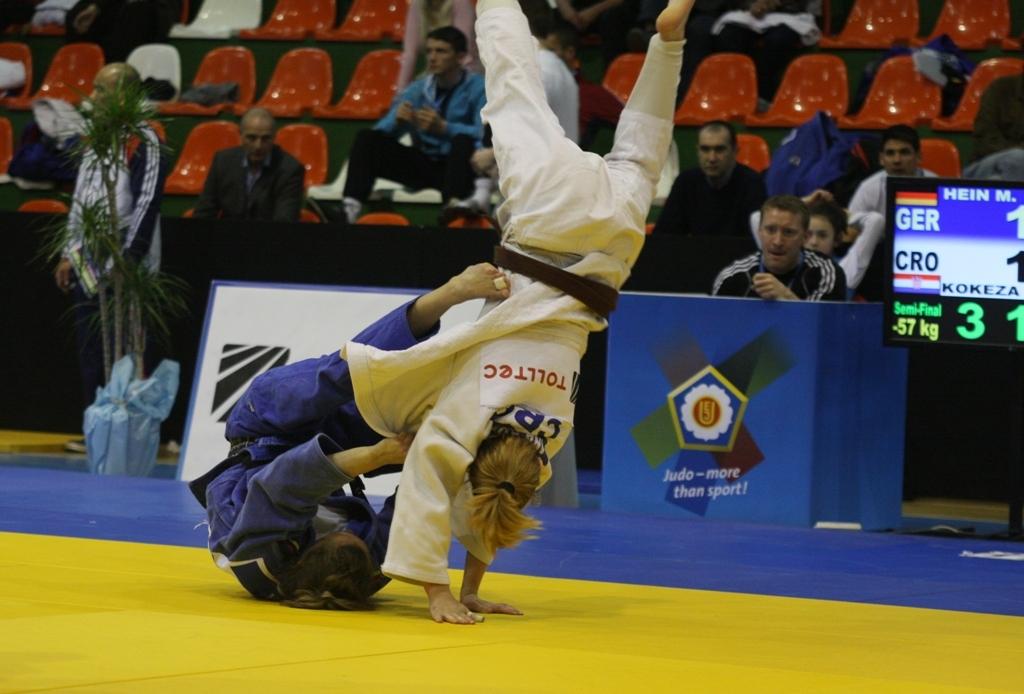 It’s been a good first day for several Europeans competing at the Puerta la Cruz World Cup in Venezuela chief among them Marlen Hein GER -57kg. Hein, who having picked up only 40pts in her last four ranking competitions, must have had some concerns about her form. But, against some quality opposition, she came good just when she needed taking gold and collecting 100pts in the process. After a first round bye Hein’s opposition came in the shape of a second round win against Gisela Garcia VEN. Thereafter Hein had the stiff task of performing a 3-2-1. That is to say, overcoming the top three seeds in succession. It’s only when one considers the strength of the opposition that one gets a sense of the quality of Hein’s achievement. Hein’s quarter-final was against last week’s Miami World Cup winner No. 3 seed Marti Malloy USA to whom Hein had lost on two previous occasions. This win brought up a semi-final against 2009 world bronze medalist and No. 2 seed Karakas Hedvig HUN. The young Hungarian is a constant feature on the world circuit and, despite picking up a bronze medal here, is considered by several observers to be showing signs of fatigue. The final saw Hein defeat Düsseldorf Grand Prix gold medalist and No. 1 seed Rafaela Silva BRA. Hein will have had a boost to her confidence as well as to her IJF World Ranking List points total. She also sends a strong message to Viola Waechter and Miryam Roper, team mates and rivals for the No. 1 spot on the German team, that the race is on and Hein is now leading it.

There were gold medals too for Marijana “Mummy” Miskovic CRO -63kg, and Ilse Heylen BEL -52kg whose recovery from a serious knee appears complete. The ever popular and hugely exciting Tomasz Adamiec POL -73kg finally took gold on the IJF World Tour defeating countryman Krzysztof Wilkomirski in the final.