Europeans take all medals at U73kg at Grand Slam Moscow 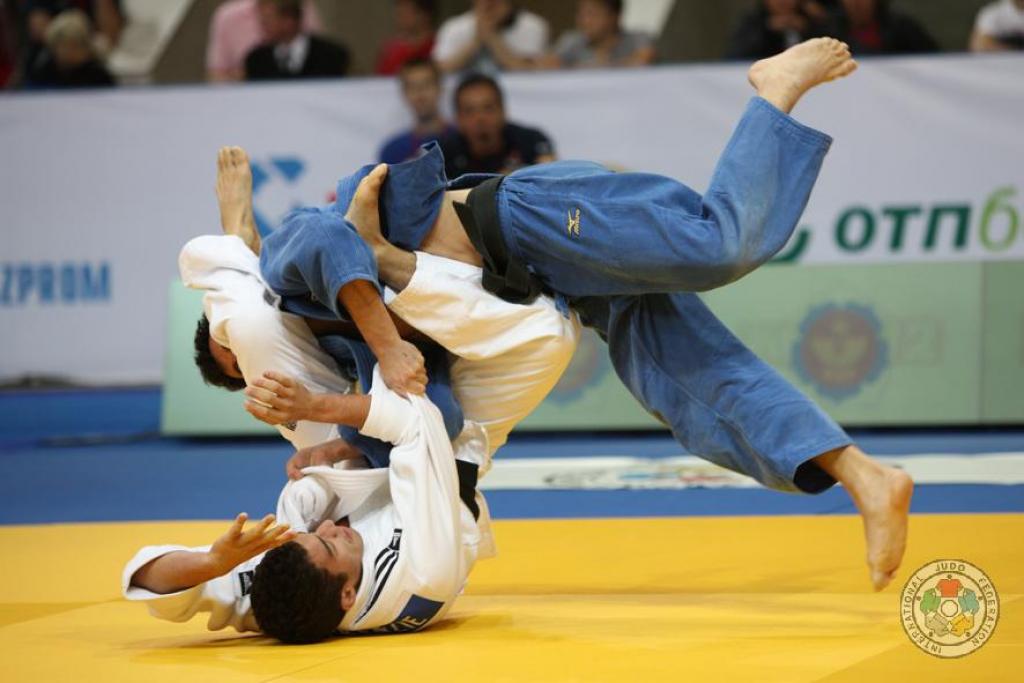 Four medals for European judoka today in the category U73kg. Gold for Dex Elmont today who defeated Christopher Voelk (GER) in the final. Voelk was quite surprising, he defeated Dirk van Tichelt (BEL) in the semi final. The Belgian frontrunner got injured in the quarter final when is ankle collapsed and wasn’t able to get his form. Van Tichelt: “I wasn’t good anyway, but at least I won a medal. I have been better and didn’t win a medal.”
Also winner Dex Elmont was quite satisfied with his gold medal despite a little injury to his heel. He scored some nice ippons although it was sometimes in the dying seconds, but those count as well. “the gold does shine” he mentioned in his twitter account after winning his first gold medal in this category U73kg. One of the last victories at this level was in 2007 when he won the World Cup in Bucharest and the Super World Cup in Moscow; sweat memories thinking about today.
Elmont defeated Murat Kodzokov (RUS) in the golden score with an unexpected leg throw.

Russia did take gold U66kg where Alim Gadanov was superior over Tomasz Kowalski (POL) who defeated Musa Mogushkov in the semi final. Good to see that Kowalski can still surprise and the talent is now building out. Gadanov however is still too experienced.

Uzbek Rishod Sobirov was again superior seeing his last throw coming from nowhere in the last seconds of his final against Sofiane Milous (FRA) who kept Sobirov from scoring more than 4 minutes. Milous was the only European on the stage U60kg.

In the women’s category Slovenian Urska Zolnir was able to win the only European gold. She defeated a number of European rivals and showed she is still one of the best to count on. In the final against Mongolian Tsedevsuren she went for an early win on the ground but Tsedevsuren kept resisting against various hold downs, pins and the whole scenario of what possibly destroyed anyone else but the Mongolian. Nonetheless Zolnir decided the match afterall by ippon.
A shining bronze medal for Yarden Gerbi (ISR) who defeated Anicka van Emden in the quarter final while rival Schlesinger lost her bout against Zolnir. So they both lost to the final winner.

Automne Pavia was the surprising finalist U57kg. In the semi final she destroyed Sabrina Filzmoser with a fantastic ippon in the last second of the fight. A moment of absence by Filzmoser was penalized immediately by the tall Pavia. The Austrian seemed to qualify for the final easy today with impressive scores in the first rounds. The French who won the Tournoi de Paris, confirmed her candidacy for the World title in her own county despite her loss in the final against Aiko Sato of Japan.
Mongolian Bundmaa Munkhbaatar upset former world champion Yuka Nishida by defeating her in the final. After the men, now the women set the tone successfully. Munkhbaatar won her second Grand Slam this year after taking the gold in Paris.
In the semi final she defeated Natalia Kuzyutina who took the bronze while Joana Ramos won bronze after her win against Anna Carrascosa.