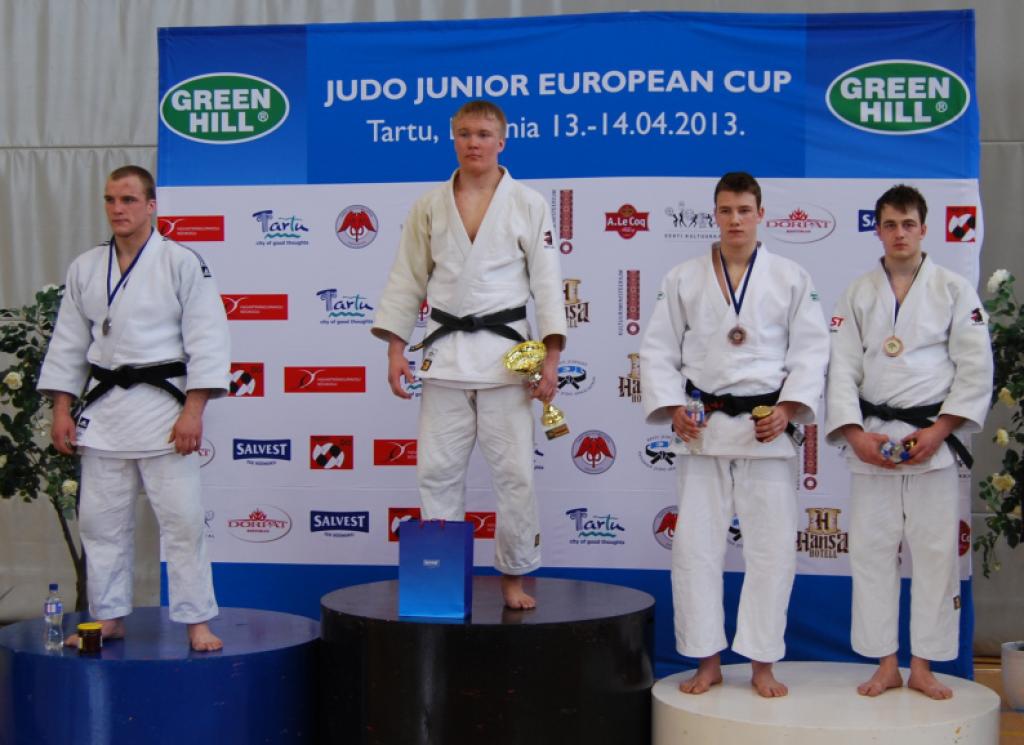 At the second day of the Green Hill Junior European Cup in Tartu a lot of enjoyable fights could be seen. Finland continued the medal rally and was the most successful nation of the competition with four gold medals, one silver and three bronze. Host nation Estonia unfortunately didn’t receive any gold medals this year, but enjoyed  three  silver and two bronze in total.

On Sunday it was time for the heavier categories. In the women’s competition Lithuania won two gold medals, out of three chances. Remarkably Lithuanian junior Renalda Gedutyte has won the Tartu Juniors European Cup over the last three years and before that in the years 2010 and 2009 she won bronze medals both times. All together five consecutive medals  for Gedutyte. Tartu is really a favourable city for her. The other Lithuanian youngster Diana Kiskel upgraded her last year’s silver to gold and won the category U63kg. In the women’s category U70kg Emilie Sook from Denmark guaranteed the gold medal for Denmark, which was also their only one.

The men also had a fair share of fascinating matches. For example U81kg the highest ranked Toni Grohn, who was last years winner and the clear favourite, had to accept a loss to Latvian Nikita Voloshins in the semi final. Golden Score and later on he had to settle with bronze. The other semi final was the most exciting match of Sunday; the Estonian competitor Kuusik and Finnish Sulander were showing a real nailbiter. In their previous encounter this year, the young Estonian, who is still competing in cadets age class, won over the more experienced Sulander. The Finnish judoka was looking for a rematch and today’s match was tied in the normal time: 2 shido vs. 2 shido with golden score as result. Both judoka showed an amazing stamina and the Golden Score went on for almost 6 minutes when finally the Finnish judoka’s activity paid off and his opponent got a third shido. A great contest for the audience and when the match ended, the whole crowd was applauding for both of the competitors.  In the final between Sulander and Voloshins, Voloshins showed why he deserved to be there and got the gold medal. The home crowds’ medal hope Andre Seppa also lost the quarter final to  Grohn, but managed to fight his way for the bronze medal and both both got a chance to stand side by side on the bronze medal podium.

In U100kg final, the Estonians cheered for Sten Alvar Sadam, but he lost the final with 5 yuko to Belarussian judoka Viktar Larchanka. In the men’s heavyweight category the winner was Marc-Alexander Fitzlaff from Germany who left the silver medal to Estonian judoka Hennrich Sildveer, who is the former bronze medallist of the Cadets European Championships.

The participating countries in Estonia were: Belarus, Denmark, Estonia, Finland, Germany, Great Britain, Latvia, Lithuania, Norway, Russia and Sweden. Some of the teams will continue with a training camp in Tartu and will travel directly to St.Petersburg Junior European cup which is held at 20-21 April.