Experience defeats the rookies at Grand Slam in Moscow 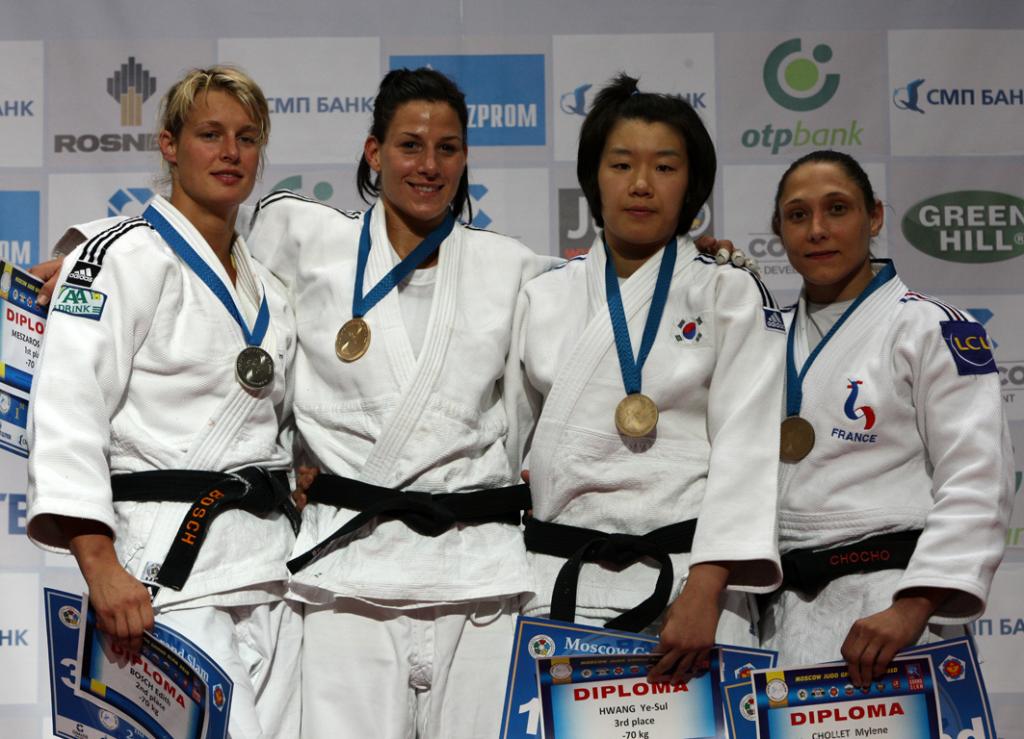 At the last day of the IJF Grand Slam of Moscow Japan won another two medals on top of yesterday’s two titles. Takashi Ono (U90) and Maki Tsukada (+78kg) both prolonged their titles today. Yang Xiuli of China did the same U78kg.

But Russia’s moment of celebration was the gold medal U81kg by Ivan Nifontov. The world champion took the title by beating Dae-Nam Song of Korea. Nifontov overcame Olympic Champion Ole Bischof (GER) in the semi final, who had beaten European Champion Sirazhudin Magomedov (RUS). Bischof won the bronze as well as Flavio Canto who was the oldest medalist today aged 35.

Takashi Ono (JPN) was the undisputed favorite U90kg to win the title. The number one seeded fighter defeated his compatriot Daiki Nishiyama in the final. Nishiyama beat Dilshod Choriev who won medals at most of the IJF Grand Slams and Grand Prix. Ono, 30 years-old, was one of the oldest winners together with Sabrina Filzmoser who’s 12 days older.

The world’s number one U100kg Takamasa Anai (JPN) qualified for the semi final today but lost to Brazilian former world champion Luciano Correa who was in a good shape today. In the final Correa defeated Tagir Khaibulaev in a tough fight. Correa was today’s strongest in a tough field of participants with World Champion Maxim Rakov who lost to Correa in the quarter final, and Olympic Champion Tuvshinbayar Naidan (MGL) who lost to Ramadan Darwish (EGY) in his first match.

Another Egyptian, Islam El-Shehaby (EGY) was the highest ranked participant in the heavyweight category. 27-Year old El Shehaby was the final winner after beating Barna Bor by decision. Although he led the match fast, he gave away his lead but kept fighting without scoring. That fighting spirit gave him the advance when the referees decided to gave him the way, despite a warning earlier in the fight. It indeed didn’t have effect on the undisputed 3-0 decision.
El-Shehaby collected his first Grand Slam victory, although he had won the GP of Düsseldorf and the World Cup in Cairo earlier this year.

In the women’s division U70kg Anett Meszaros (HUN) defeated Dutch Edith Bosch in the final. Meszaros who is eight years younger than one of her competitors for the world title Edith Bosch, now defeated the former World Champion by yuko. Meszaros had beaten Bosch three years ago at the worlds in Rio, but lost three times of the experienced Bosch who lost her second Grand Slam final this year. In Rio she lost to French Lucie Decosse, still Europe’s best fighter U70kg. But Meszaros is in a good shape for a long time, winning the European title in April and now she was this weekend’s youngest champion in the Russian capital.

The youngest medalist was also a Hungarian, 19 year-old Abigel Joo. The European champion will bring home bronze, but lost to Olympic Champion Yang Xiuli (CHN) in the semi final U78kg. Yang defeated Audrey Tcheumeo of France in the final. Tcheumeo is really growing this year and is competing with Celine Lebrun, but not for a spot athe World Championships where two fighters are welcome in one category. Tcheumeo, Europe’s U23 champion won the Grand Prix of Tunis this year and bronze in Rio, and now reached the final while Lebrun lost to Tomomi Okamura (JPN). Okamura lost to Tcheumeo in the semi final. Tcheumeo also defeated world champion Marhinde Verkerk today.
26-Year old Xiuli prolonged last year’s title in Russia.

Three Asian fighters reached the semi finals +78kg. The only European representative was Urszula Sadkowska (POL) who finally finished third. Maki Tsukada (JPN) defeated her compatriot Megumi Tachimoto in the final. The silver medalist beat home favourite Tea Donguzashvili (RUS) in the quarter final. Tsukada, former world (2007) and Olympic Champion (2008), seems to be on her way back and she is one of the favourites for the world title in September in Tokio.

The average age of the Grand Slam this year was 25.7 years in Moscow, in Rio 24.7 years, in Paris 23.9 years. Experience defeated the youngster this weekend.