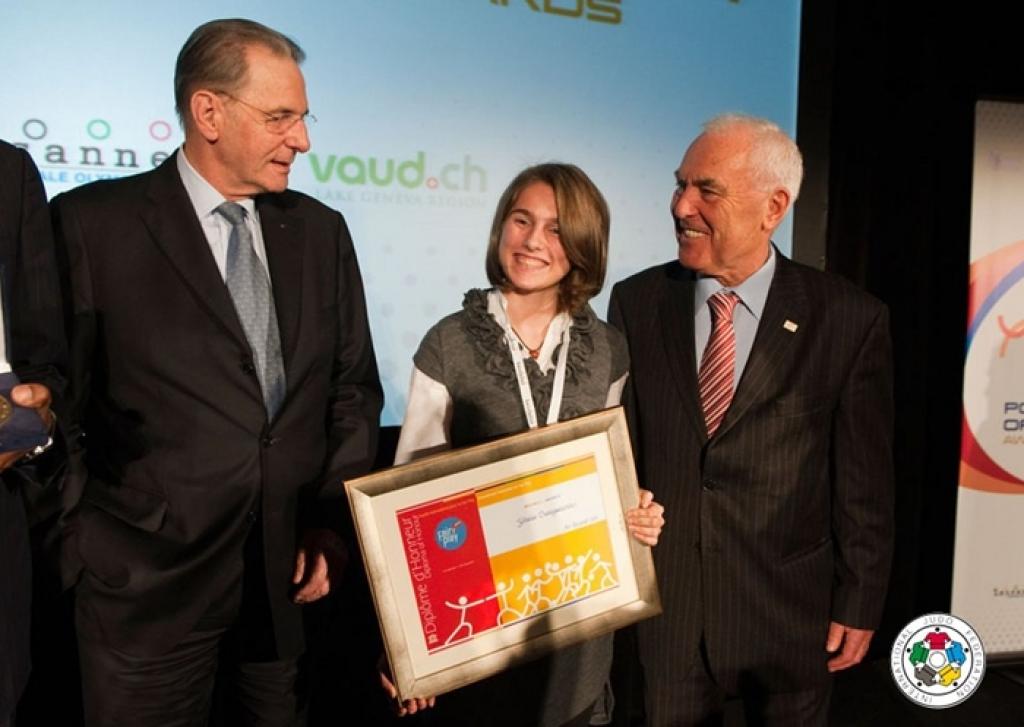 Bulgarian Yoana Damyanova is a 16-year-old teenager. She will be 17 on the 1st of May. When she arrived at the Geneva Airport on January 27th, she was rather intimidated.
For such young girl, traveling alone across Europe, to come from Sofia (BUL), where she is living with her family, to Lausanne, in order to receive the Fair-Play award given by the International Fair-Play Committee, is not so simple. But accepting to postpone her first match on the occasion of the Youth Olympic Games, Singapore 2010, was not an easy choice either. Nevertheless, that is what the young judoka, competing in the women’s -44 kg, did when she was supposed to fight against Dieulourdes Joseph, from Haiti, who was unable to arrive on time.
As Jeno Kamuti, the International Fair-Play Committee President noted, “Yoana represents the Youth. In our modern society, where we have the tendency to lose some of our values, Fair Play is a key value. It is of course so evident in sports but generally speaking, it should also be the case in our entire lives. What Yoana did, totally naturally in Singapore, is just what we want and what we need to promote: respect, open-mindedness, humility…. I am so happy that she will receive the Fair-Play award in Lausanne and I am so happy that it will be in the presence of Mr. Jacques Rogge, the IOC President, who pushed so hard to have the Youth Olympic Games. And last but not least, I am really proud that Judo, through Yoana’s behavior, will receive an award. Your sport is so powerful and represents so well what fair-play should be.” After those encouraging words from the Fair-Play Committee President, it was time to listen to what Yoana had to say about her symbolic decision in Singapore.

Can you tell us about the qualification and the preparation process you went through in order to go to the first edition of the Youth Olympic Games?
I was qualified for the Youth Olympic Games after having finished 7th place at the World Cadets Championship, Budapest 2009. Several months before the big event in Singapore, I knew that I would take part and I did my best to be ready. Exactly two months prior to the YOG, my dad, who is also my coach, started special training and my goal was definitely to get a medal.

What souvenir do you have of Singapore?
Oh, I remember that people were so nice with me and with everybody. Everything was just beautiful and well organized. And I made some good friends from the Bulgarian delegation in the other sports like: wrestling, swimming, boxing.
Then of course, I remember the opening ceremony. I didn’t take part to the closing. But the opening was simply amazing and wonderful. I have never seen anything like that in my life before. How can I describe what I was feeling when I entered the stadium or how impressed I was by the extraordinary fireworks? It is impossible.

But you were in Singapore to compete. How did the competition go for you?
The competition started well even if I was really sick. I had a fever of more than 40° that day. But my first fight against the Haitian was OK, I won. Then it became more complicated. I lost against the Korean in my second combat but I was able to enter the repechages. Again I won my first fight but I was really sick and I couldn’t make it to the bronze.
I was really disappointed and at the same time, I knew that it was a better result than my 7th place during the Worlds.

Congratulation on your great fifth place in Singapore. But what really interests us today is your first match, the one you won against the young Haitian girl. Could you please tell us about that fight?
Actually, for me it was a fight like all the others. The only difference was that is was the first, and the first time that you step on the tatami is always stressful and full of emotion, especially on the occasion of an Olympic event. But I was informed that my opponent was not there. Normally, I knew that I should have been the winner, because it is the rule. But we sat down with my coach (i.e. Emil Demyanov, also Yoana’s father) and we decided together that it was better to wait. We knew that the Haitian was stuck somewhere in traffic and that she couldn’t arrive on time. So we simply waited, because it was normal.

Did you realize that your decision was something exceptional?
Not at all. As I told you, for me, for us, it was normal. When you come from the opposite side of Earth and you cannot be on time, you would love for somebody to be waiting for you. It was just a few weeks after the YOG, as I was already back home, that I received a letter from Mr. Vizer, the IJF President, expressing how impressed he was by the decision that we took. Then, later on, I received another letter from my Judo federation explaining to me that I was invited to Lausanne to receive a Fair-Play award.

And, you came to Lausanne to receive your award?
I was so nervous. Obviously, I know what traveling means, but it was the first time ever in my life that I was traveling alone, without my parents or without my teammates. But everything was perfect and yesterday evening when I stepped on the stage to get my diploma, I almost cried. There were so many people and important people. I was from far away, the youngest. I was impressed by everyone and at the end of the evening I was really tired. But once again, everything was great and I think that I have never, ever experienced something like that in my life before.

What does fair-play mean to you, now that you have received that prize?
For me, fair-play means that everybody should have an equal chance in the beginning. No matter what the initial conditions are, we should start at the same level and then only everyone’s individual qualities should make the difference and not a traffic jam.

What can we wish for you in the next months and years ?
I will keep training and competing. We are a “judo-family”. My sister is also a judoka and a good competitor (Borislava was 2nd at the cadets European championship last year) and my father is our coach. And maybe, one day, I will go back to an Olympic event, but for the senior that time.